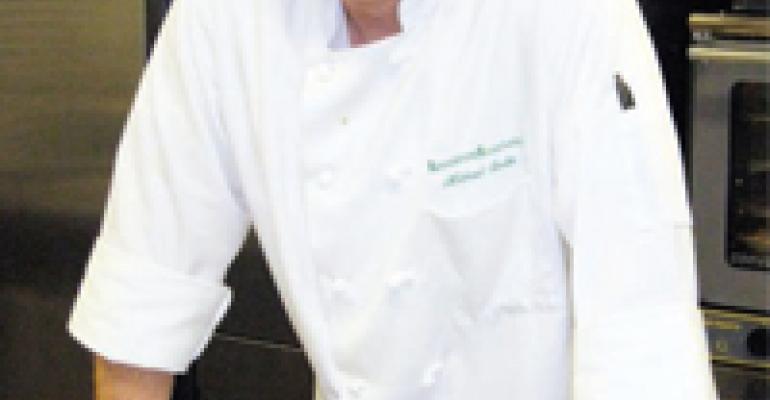 Meeting the Challenge of the Times

There are plenty of positions for talented chefs in New York City, but Michael Smith has chosen one that may not come immediately to mind when one thinks about dining in the Big Apple.

Smith is the executive chef for the Restaurant Associates managed operation at the New York Times. It's an environment that poses the challenges typical of large white collar B&I operation in a big city: a sophisticated customer base with plenty of other dining choices right outside the door (in this case, what's right outside the door is Times Square) that requires variety, quality, convenience and, yes, even value, in a New York context.

The Times cafe sees close to 2,000 visitors a day, most at lunch, though there is also breakfast and dinner service. Smith has worked to expand the options, leveraging the resources of Restaurant Associates and his own extensive commercial restaurant experience.

For example, RA's Chef's Table program has been customized to feature recipes that have appeared in the Times, and Smith has upped the number of vegetarian dishes being served to meet customer preferences. He also partners with Times “affinity groups” [organizations of individuals sharing common interests or ethnic heritage] that assist with menus for special events and theme days.

My first job in high school was with a butcher shop, and one of my duties was delivering to restaurants. I found going into kitchens and seeing what was going on really exciting. It just seemed like a fun place to work. I ended up working at one when a dishwasher failed to show up. Eventually, I moved up to become prep cook at a little place in Brooklyn.

When did you decide to make this a career?

When I was about 21, I left Brooklyn and took a job with Laurent, a French restaurant in Manhattan. Going from the little family run place I had been at to this classic French kitchen really inspired and excited me. After a few years there, I enrolled at the Culinary Institute.

What were some of the restaurants you worked at like?

The Hudson River Club sourced a lot of its ingredients from farmers markets, and this was back in the early 90s. I spent the next 10 years working for Waldy [Malouf] in various restaurants around New York like the Rainbow Room. Then I went off on my own to be executive chef of 27 Standard and Jazz Standard, a jazz club restaurant. Later, I went back to work for Waldy as chef at Beacon, an American steakhouse with a wood burning oven, a very interesting style of cooking.

How did you connect with RA?

As my kids got older I started looking around for other options. One of my close friends from the Hudson River Club days was working as a chef at the Metropolitan Museum of Art and was getting promoted, so he needed to find a replacement. I met with the RA folks and ended up taking the position at the Met as executive chef.

It was a multi-location operation with two cafés — one for the public and one for employees — plus a trustees' dining room and two smaller cafés. Catering was very big. I was there for the reopening of the American Wing cafe. We had a hard hat themed lunch while the renovation was still going on with everything served in lunch pails like those you'd find at a construction site.

What was your initial reaction to the possibility of working in a B&I like the Times?

I found it very exciting because to somebody who was always in restaurants, a visit from the New York Times could be either the worst or best day of your career. I read the Times Food section every Wednesday, so the opportunity to be part of an organization like that was really fantastic.

Now you're in their cross-hairs every day…

Yes, the signs in our cafe get spell checked quite often by everybody…

anything that's home cooked that I don't have to cook”

“anything that's home cooked that I don't have to cook”

Dish he likes making at home with the kids:pizza