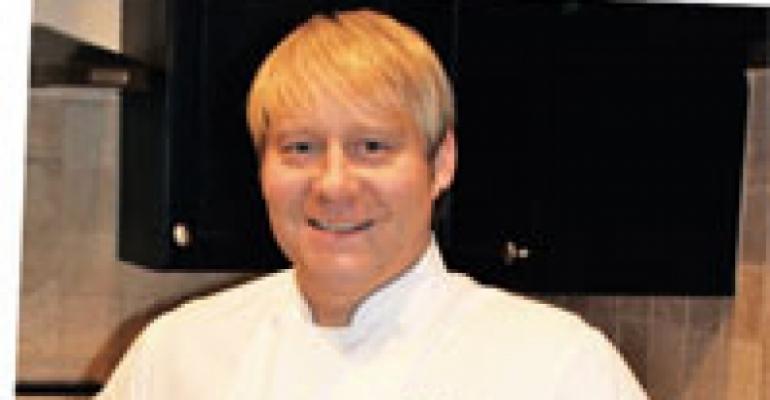 Executive Chef Cornel Ruhland of NYU Langone Medical Center in New York City spent most of his career in European fine dining restaurants and on luxury cruise ships. Today, he's in the healthcare segment, where he won the AHF Culinary Competition this past spring on his first try.

At NYU Langone, Ruhland offers input on the patient dining menu, but his main responsibility is overseeing catering and VIP meals. It is a position that requires satisfying a sophisticated, demanding clientele on behalf of the institution.

Ruhland received his culinary training in Germany and Switzerland, where he also worked for a number of years in restaurants. He also spent a year working at an upscale restaurant in Tunisia, and on a small German cruise line.

He came to the United States nine years ago when he was offered a position at the Grand Hotel on Mackinac Island in Michigan. After a season there, he joined Regent Cruise Lines and served as an executive chef for shipboard dining services.

Ruhland stayed with Regent for eight years and took the opportunity to see the world and sample international cuisines and culinary traditions on his ship's frequent stops in different ports.

A friend who works at NYU Langone alerted him to an open position there earlier this year and he joined the staff in March.

What were your responsibilities on the cruise ships like?

I was cuisine chef in charge of five different restaurants on board. They included Compass Rose, a fine dining restaurant that serves high-end international cuisine to as many as 500 people a night. There was also a high-end steakhouse called Prime 7 and some smaller and more casual outlets. Basically, I was in charge of the cuisine on one of the world's best cruise ships.

You must have had some adventures…

You get great experience! It's a perfect opportunity to learn. I used to go into ports, find the local markets and discover new ingredients, new local products that we would feature on the ship in our destination dishes. You know that cooking show on TV where the host goes to different places around the world? Well, I've seen most of the places he goes to.

What were some of the more unusual dishes you served?

Well, one time in Australia we served stuffed alligator but I generally had to be careful not to get too crazy.

How did you end up at NYU Langone?

I decided at the end of last year to settle down a little bit. I had been living in New York for more than two years, but had been mostly in and out and never actually worked in the city. So I said to myself, ‘Well, let's look into doing something else.’ That's when I kind of slipped into the healthcare system. A friend of mine worked at NYU and told me about it. It is something rather new for me but I like it very much.

How did you come up with the AHF winning dish?

I had seen soy paper a couple years ago for the first time in Cape Town and really liked it. It's very colorful and gives a great ‘Wow’ effect. The chef there said he actually got it from the United States, so when I came here I found the supplier. I played around with it and decided to use it to make a kind of sushi — which I love — with chicken instead of fish. It's out-of-the-box but follows the trend toward light and nutritional eating.

Favorite Dish
a “fantastic steak” with a simple salad