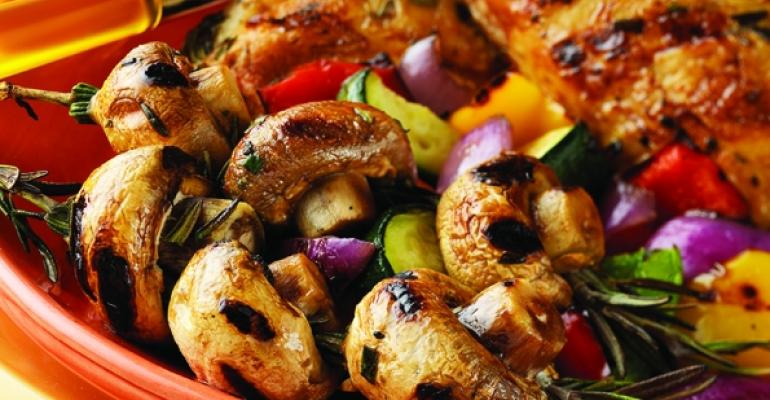 Chicken in the Garden

Come midsummer, the garden at Spartanburg Regional Hospital in Spartanburg, SC, is busting out all over. It sits between two wings of the building, and the herbs are going like gangbusters.

“Everything is growing great,” says Patrick McDonnell, regional executive chef. “The space gets just enough sun. With the location being protected a bit from the elements, I have a feeling we’re going to have an even longer growing season.” 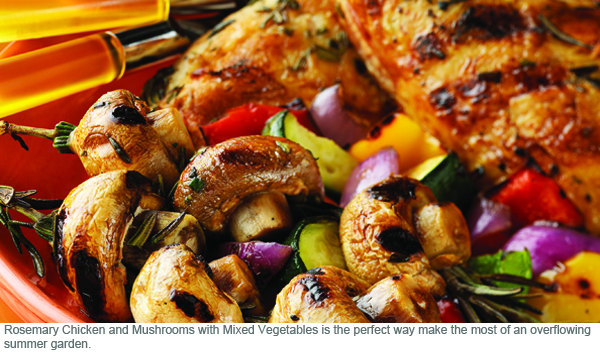 Chicken destined for the grill begins with a marinade that’s fragrant with minced thyme, rosemary and garlic, fresh from the garden.

The grill is a natural fit for summer veggies, herbs and chicken.

“One of the great uses for abundant summer vegetables is grilling or roasting for use in a warm salsa,” says Eric Yung, executive manager for retail concepts at Miami University, Oxford, OH.

At Maplestreet Station, one of Miami’s dining locations, the rotisserie is used to roast zucchini, yellow squash, eggplant and pineapple for warm salsas to accompany chicken.

“These salsas can also use quite a few seasonal herbs for flavor,” Yung says. “We’ve done some testing with basil, cilantro and green onions.”

Produce from an urban garden, nearby rural areas in Northeast Ohio, and an onsite garden at a local university provide many of the ingredients for Tony Smoody, Bon Appetit executive chef, Cleveland Botanical Gardens. He knows just what to do when the produce is at its peak. 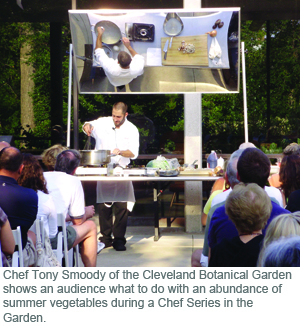 “We’ll get a garbage bag full of basil from Case Western Reserve University,” Smoody says. “And the best thing to do with that is pesto.”

The pesto can be drizzled on tomatoes or zucchini, and also makes great chicken pesto skewers, which can be found in the Botanical Garden’s café, and also at catered events by the garden.

Other menu items at the garden's cafe include Smoked Chicken with Blackberry Barbecue Sauce (with blackberries from a local farm that individually quick-freezes the berries); and an Indian Chicken Salad with bell peppers, green onions, cashew and a curried tomato vinaigrette (seasoned, roasted tomatoes, vinegar, Dijon mustard, garlic, curry spices and oil).

“The intensity of herb paste is awesome,” says Gary J. Rawson, CEC, AAC, chef at the Sarratt Student Center, Vanderbilt University, Nashville, TN. He coaxes even more fragrance and flavor from fresh herbs in a sauté pan with hot olive oil, transfers it to a food processor, hits it with a little hot sauce and rubs the pesto under the skin of a chicken breast before browning it in the oven.

Rosemary, sage and garlic incorporated into a paste have a starring role in Herb Roasted Chicken at Montgomery School, which is half of a chicken, skin-on, with the herbs massaged under the skin. It’s then placed in a roasting pan on a bed of diced garden vegetables, chicken stock and bay leaves.

Ratatouille to the Rescue

For chefs feeling overwhelmed by a garden’s veggie output, the answer can be Ratatouille, a Provencal vegetable stew that can incorporate zucchini, eggplant, onions, peppers, tomatoes, garlic and more.

“Soups are really the best way to use up produce,” Smoody says.

He often adds pre-seared chicken thighs to the stew, and lets it simmer to imbue the whole dish with a wonderful chicken flavor.

And, “even though it’s summer, we sell so much soup in the café,” he adds. “Vegetable and chicken soups just kill it. We sell five gallons a day.” One very popular soup is Corn and Chicken Chowder, which makes use of the Midwestern favorite, sweet corn and milk and cream from a local dairy. “That soup is almost 100 percent local.”

At Miami University, summer vegetables are grilled first and then added to ratatouille, adding even more depth of flavor, Yung says.

The Garden’s the Way to Healthier Eating

“They love the lean protein and vegetable combo. It’s a way to really keep it light and simple,” says Leslie K.L. Ekstrand, Parkhurst Dining general manager at Chatham, which has an organic garden with abundant corn, zucchini and summer squash.

The garden is tended by Chatham students in the Food Studies program who look at sustainability and local food.

Come summertime, for many onsite chefs, that connection is obvious.

“These healthier preparations and the use of vegetables as a larger percentage of the daily diet is so important to our students,” Yung says. “It’s exciting to look for new ways to feature them.”