The competition took place Thursday evening in Minneapolis, MN, during the annual NACUFS National Conference, bringing together six regional culinary challenge winners from around the country. They had an hour to prepare four portions of their original duck dishes.

It was standing room only, the audience was amped, and the event, sponsored by US Foods, was a high-pressure situation—literally. Pressure cookers sent steam into the rafters and rattled along, racing against the clock. Knifes glinted to execute complicated knife cuts as the chefs brought their recipes and skills to the contest. The sizzle of duck fat sent an unmistakable, savory aroma into the room.

The Pacific Region's competition in Reno earlier this year was Benes' first time in any culinary competition, he says, adding that after winning there, he practiced his recipe once a week, "whether I wanted to or not." The practice paid off and the national competition was "an amazing experience."

"It wasn't really between me and these other chefs; I was competing against myself to try to make this dish the best I've ever made it," Benes says. "Getting a medal not just at NACUFS, but from the ACF is really important to me; it's such a high standard."

An emcee from US Foods worked the crowd, at one point bringing a microphone to Eric Cartwright, CCC, executive chef at the University of Missouri, so he could explain why duck meat is red. “It has to do with the concentration of myoglobin,” Cartwright explained. The chefs took duck meat to the limit, showing off their skills.

From the Continental Region, Peter Testory of Colorado State University prepared for the judges Pan-Seared and Pressure Braised Duck with Potato and Turnip Latke.

From the Mid-Atlantic Region, Donald Stauffer of the University of Pennsylvania made Thai Red Curry Duck.

From the Midwest Region, Jeremy Elmore of the University of Missouri prepared Coffee-Rubbed Duck Breast and Braised Thigh with Spinach Gnocchi de Parisienne and Batonnet Carrots. Elmore was supported by the loudest cheering section, proud members of his team from Mizzou.

From the Northeast Region, Cyril Ortigosa-Liaz of Yale University made Tellicherry Pepper Duck Breast with Kiln-Dried Cherries and Garden Vegetables. 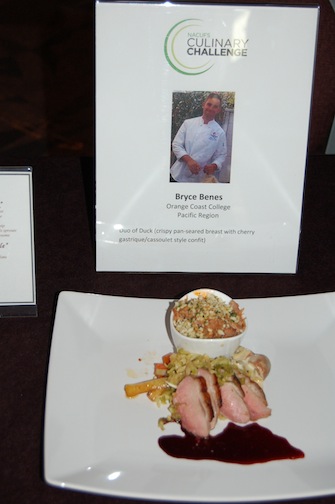 DUO OF DUCK: The winning dish by Bryce Benes of Orange Coast College. Crispy Pan Seared Breast with Red Wine Gastrique/Cassoulet Style Confit. Benes grew up in Lincoln, Nebraska. His heritage inspired this dish: German and Czech-style holiday dinners with duck and sauerkraut: "My favorite meal of the year," he says. "I wanted to draw on my childhood nostalgia. And cassoulet is just a simple, classic, French dish. I wanted to keep it simple and keep it flavorful."

The competition is sanctioned by the American Culinary Federation as a K-1 Duck Regional Taste/Customized Competition. ACF gold, bronze and silver medals were awarded based on scores.