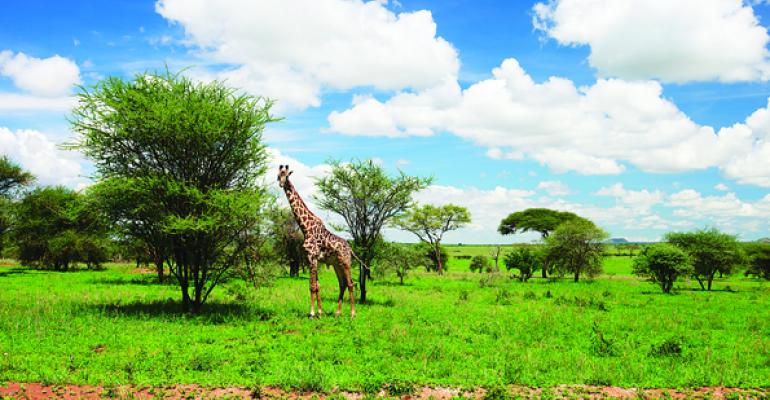 The food of Senegal, Ethiopia and South Africa has traditionally been unfamiliar to most chefs.

A long journey can begin with a single dish. Although the continent of Africa has 54 countries and a vast amount of cultural and culinary territory, an exploration of its bold, hearty food can begin with just one recipe.

While Asian, French and Italian food are familiar to most chefs—studied, perfected, riffed on again and again—the food of Senegal, Ethiopia and South Africa is barely touched upon in a typical culinary education.

“A culinary student can get a degree but not learn a thing about the whole continent of Africa, even as they might spend a whole semester on Asia. There’s some balance needed,” says Wilbert Jones, president of the Wilbert Jones Company and host of the TV series “A Taste of Africa: Culture and Cuisine from Casablanca to Cape Town.” He has written several cookbooks on African cuisine and is currently at work on another.

Chicago-based Jones began his lecture and tasting series at Kendall College with the cuisine of Senegal, a country on the western coast of Africa. 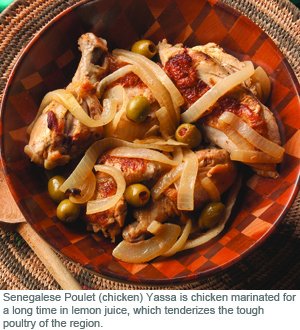 Like many countries in Africa, Senegal has been influenced by colonization and exploration. French and Portuguese flavors and cooking methods have been applied to local ingredients: fish, peas, nuts, yams, rice, corn, okra, tomatoes, hot chilies and more.

Yassas are stews found all over western Africa that are made with marinated meat. In one such stew, Senegalese Poulet (chicken) Yassa, chicken is marinated for a long time in lemon juice, which tenderizes the tough poultry of the region. Yassa can also be made with fish, onions, carrots, cabbage. The stews get a distinctive flavor from a Dijon mustard sauce and pimiento-stuffed olives.

“You can taste the influence of France with the Dijon, and also the Mediterranean, with the olives,” Jones says. Many of the spices in African cooking originated in India, lending curry flavor and flares of heat throughout many dishes. Stews in Senegal are most often served over rice or with fufu, a kind of porridge made of ground rice and milk.

Another dish Jones demonstrated at Kendall College was Senegal’s national dish, thie’boudienne (cheb-oo JEN), a whole redfish, the flesh slashed with a sharp knife and stuffed with parsley, thyme, garlic, salt and pepper, then cooked over a bed of onions, tomato paste, chopped carrot and cabbage.

Connection with the American South

“We were looking for something more unusual than the usual Latin, Italian, Mediterranean cuisines—but something that would still be familiar enough to work,” Claypool says.

The result was an item that did so well it’s now on regular rotation: Dongo Dongo, a stew from Africa’s east coast. Claypool immediately made the connection between this dish and a well-known signature of the American South.

“It’s similar to a Cajun gumbo,” he says, “with okra and tomatoes, but with a different flavor profile.”

Stews are the perfect “one-pot meals” for onsite operation, Claypool says. “When you’re trying to keep food costs under control, a stew is great. You don’t need that much meat, and thanks to the cooking method, you can use lesser cuts, because it gets tender and delicious. Stews are a way to use root vegetables and greens. And then there’s that comfort aspect—it’s a familiar texture and consistency, and in this case it also includes exciting new flavors.”

A Moroccan vegetable stew with chickpea, tomato, eggplant, squash and peppers is also popular with both the vegetarian and gluten-free crowds at Vanderbilt.

Hungry for more African cuisine, Claypool has sampled some of Nashville’s Ethiopian restaurants. There is a large Ethiopian population there, and Vanderbilt Dining staff will likely be learning more, Claypool says.

“Since Ethiopia was never colonized, they don’t use utensils,” Jones says. This means eating with a spongy flat bread called injera, which is made from the ancient grain teff. It’s ubiquitous on Ethiopian tables as “diners use their fingers to tear off pieces of bread throughout the meal.”

This signature Ethiopian bread requires three days to make, in order for fermentation to take place, but the process is easy. 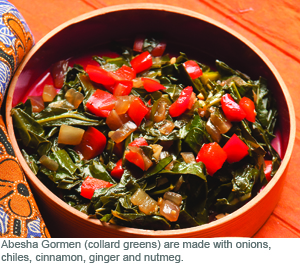 In this country, “injera bread can be a great gluten-free option,” says Jack Cahill, assistant director of Dartmouth Dining Services, who describes the bread as “a very unique, tasty pancake.”

Dartmouth Dining partnered with Damaris Hall, chef-owner of local catering company/restaurant Taste of Africa as part of the visiting chef program. She brought her knowledge of Ethiopian food and students got their first taste of authentic wot.

The variety of Ethiopian stews have continued in the menu rotation and are “so well received,” Cahill says, with the added bonus that the cost of each serving is “remarkable—about 88 cents per serving,” Cahill says. “Sales of the stews actually ramped up. Usually the novelty will wear off a new item, but in this case, through word of mouth, the stews got more popular.”

Students’ quest for authenticity in food had something to do with it, and they notice and appreciate that the stews are “not a dumbed-down version,” Cahill says. Click for more information on Dartmouth’s program.

A Celebration from South Africa

In South Africa, the equivalent to Thanksgiving Day is something called Braai Day on September 24. A braai (rhymes with dry) is a uniquely South African gathering around food roasting on an open fire, similar to an American barbecue.

Archbishop Emeritus Desmond Tutu, the patron of Braai Day, has said, “We’ve learned that people who sit down to share a meal together, who talk about their interests while celebrating their differences, are much more likely to build a prosperous future together.”

Looped video and poster images of Tutu and also Nelson Mandela were the backdrop for The New York Times’ very own Braai Day celebration.

“One member of the Diversity & Inclusion group here is from South Africa, and he helped us put together a very interesting menu,” says Michael Smith, executive chef, The New York Times/Restaurant Associates, New York City.

Since the cuisine of South Africa is heavy on the meat, grilled house-made sausages were part of the celebration. The condiment for the sausages is a sauce/side dish called Chakalaka.

Chakalaka is a sweet, spicy side dish made with tomatoes, beans and vegetables, often served with sausage.
For the NY Times celebration, it was served with the sausage in a more pureed form, and as a stand-alone side dish with cauliflower and broccoli mixed in. Chakalaka is now on regular menu rotation.

“There’s always a dish or two that stands out from an event like this,” Smith says.

Other South African dishes that were featured include Peri Peri Chicken, with a spicy punch that comes from African birds eye chilies; and Lamb Potjiekos, a braised lamb stew in which “baby vegetables like pattypan squash were added during the last third of cooking, and that gave it a lightened up flavor,” Smith says.

Overall, the event was emblematic of the best things about diversity, good food, gathering, and a reminder of being open to new adventures, Smith says.