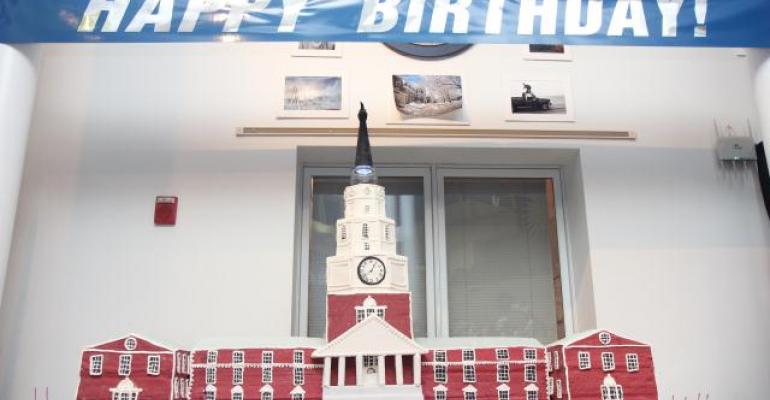 In 1813 Baptists had created the Maine Literary and Theological Institution. Eight years later it was renamed Waterville College. In 1867 trustees voted to call it Colby University in recognition of Gardner Colby, who made a $50,000 donation that saved the financially strapped institution at a critical time. Later renamed Colby College, it outgrew its downtown location and, in 1952, completed the move to its Mayflower Hill campus.

Okapal, known in the company as “Baker Dave,” is a silver medal winner of the “Extreme Wedding Cakes” competition on Food Network Challenge and designs cakes for Sodexo’s partner campuses throughout the country.
When Okapal and Benney were finished combining more than 600 pounds of ingredients, the cake measured seven feet long, two feet from front to back, and seven feet tall. The cake’s library tower even had a blue light, just like the actual 191-foot tower on Miller Library.

“A celebration of this importance is deserving of an impressive cake,” says Varun Avasthi, Sodexo district manager. “We knew Baker Dave and Chef Wendy could make that happen.”