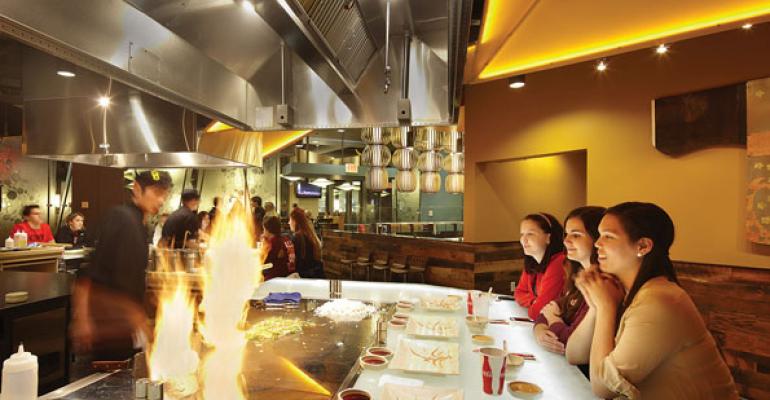 College and University Innovator of the Year

Virginia Tech Dining has racked up over 25 Loyal E. Horton awards from NACUFS, won a pair of FM Best Concept Awards and placed in the top 10 of schools in the Princeton Review Best Campus Food competition for three years running

When FM profiled the campus dining program at Virginia Polytechnic Institute and State University (Virginia Tech) five years ago, it was already one of the best in the country. By that point, Virginia Tech Dining had racked up over 25 Loyal E. Horton awards from NACUFS (including six Grand Prizes), won a pair of FM Best Concept Awards, placed in the top 10 of schools in the Princeton Review Best Campus Food competition for three years running and was approaching $40 million in annual revenues thanks to its success in attracting thousands of voluntary meal plan participants.

All that is still true.  But the program has not rested on those laurels.

The 35,000-sq.ft., 1,077-seat venue opened last August with a mix of three national branded and five internal branded restaurant concepts spanning two levels in a new LEED Silver certified facility (a third level has offices and classrooms). All are unique to Turner Place

“We wanted to add to what we have instead of duplicating,” says Ted Faulkner, director of dining services. “The mix of concepts is the result of feedback from literally thousands of students and campus members on what they would want to see in a new dining facility.”

Another Jewel in the Crown

Apparently, those customers like what they’ve seen: Turner Place has consistently drawn more than 50,000 customers a week even though it is only open Monday through Friday. Much of that has been incremental new business, Faulkner says.

While there has been some drop-off in counts at other dining outlets, the overall numbers have overwhelmingly been on the positive side as total program transactions have jumped by about 12%, or around 800,000, from last year, exceeding seven million. In April the department exceeded one million transactions for a single month, the first time ever.

Simply put, Turner has made an already exemplary program even better.

Part of the reason that Turner has added new business rather than simply cannibalizing existing sales has to do with its location. It is the only dining venue on the north side of the campus, where it is surrounded by classrooms brimming with students during the day, many of them coming from off campus and parking nearby (less than a third of Virginia Tech’s enrollment is resident).

Previously, if they wanted to eat on campus, these students had to trek around the school’s central oval drill field to reach food courts in the Squires Student Center or Owens Hall.

Turner now offers a highly appealing and readily accessed place to eat before, between and after their classes. In addition, it is also conveniently located near the school’s administrative offices, opening up sales opportunities to professional staff. The bottom line: Virginia Tech Dining saw an opportunity to tap underserved customer niches and took it when the space became available.

The department essentially traded the space of one of its older facilities—Shultz Dining Court—for the new space. (Shultz is now the site of a new Center for the Arts facility.) Turner houses not only the new dining operations but also is the new home of the school’s Corps of Cadets (formerly located in Shultz), who use the facility’s 265-seat community room for its traditional evening meal.

The rest of the time Turner is a common seating area with traditional long tables at which students eat communally and interact. It is generally packed during lunch.

Community is an important part of Turner’s mission, says Dr. Frank Shushok, associate vice president for student affairs. “What is the difference between a campus dining program and a hotel or restaurant?” he asks rhetorically.

“The latter is built on a commercial model, while a campus dining is there to help build community and bring together students, staff and faculty.”

A Mix of Familiar and New

Chosen with the help of extensive campus research done by the Porter Khouw Consulting firm, the concepts at Turner Place include three recognized street brands with tried-and-true appeal to college students: Bruegger’s Bagels, Jamba Juice (the first in the state) and the first university-run Qdoba Mexican Grill unit on a college campus. The Qdoba, modeled on the unit in New York’s Times Square, is the second busiest of the chain’s locations in the entire country, generating some $1,500 an hour in sales. The Brueggers station goes through about 30 cases of bagels and 750 transactions a day, some from a special walk-up window that allows students to place and get orders without entering.

Among the in-house brands are…

1872 Fire Grill, which is divided into a Southern comfort food station featuring a Wall of Flame vertical rotisserie on one side and a grill preparing meats and seafood to order on a charbroiler that burns real hardwood on the other;

Dolci e Caffe, a combination creperie/coffee-bakeshop/gelato station that features crepes made to order and authentic gelatos made in-house;

Origami, a Japanese sushi/steakhouse featuring a sushi bar where students can sit and eat while the chefs roll the product directly in front of them, and a dining room with four 10-seat teppanyaki flat-surface grills around which patrons can sit and watch chefs prepare their meals; and

Soup Garden, a soup/salad station with salads made to order from a combination of ingredients.

In addition, there’s a grab-and-go section next to the Dolci station where students can quickly get freshly made packaged salads, sandwiches, parfaits, fruit cups and so forth, as well as specialty selections from the various Turner restaurants, like sushi from Origami, soup from Soup Garden and pizza from Atomic. It also features a Coke Freestyle fountain beverage unit with over a hundred flavors students can blend at their will.

The wood for the Atomic pizza oven and the 1872 charbroiler—32 pallets worth a year at present—are purchased from the school’s Forestry Club as both a sustainability initiative (it’s local and sustainably harvested) and an interdepartmental cooperative gesture, since it helps fund the Forestry Club.

Designed with the help of consulting firm Mesher Shing McNutt, Turner Place spans two levels. Each concept has its own distinctive look—even the sneezeguards for the different venues are customized to blend with the surrounding décor—to provide customers with the feeling of different restaurants.

The staff uniforms and décor of each is designed to evoke a specific “feel”: 1872’s grill side, for example, has the atmosphere of a Chicago style steakhouse, while Atomic Pizzeria—tucked away on the facility’s lower level—highlights that location with an “industrial” look complete with subway tiles to convey an urban ambiance.

Nor does Atomic duplicate the pizza available at other campus venues. “This is a distinctive product just as the pizza in the other locations on campus is distinctive,” says Faulkner.

Turner Place may be the newest star in Virginia Tech’s campus dining constellation, but hardly the only one. The school’s dining program has met the challenge of attracting a commuter-heavy student population through a shrewd combination of high-profile national brands, innovative internal brands and plenty of convenience and variety.

All of this is bolstered by a flex style meal plan approach that has proven itself, both by the number of students who participate voluntarily and by student vote-driven rating services like the Princeton Review and College Prowler. The latter recently named Virginia Tech No. 1 on both its Best Quality Food and BestVariety rankings.

Virginia Tech Dining also runs the campus catering operation and a central production/warehousing facility called Southgate Food Center where ingredients are pre-processed and bulk produce items are prepared for delivery around campus. It also has a full bakery and extensive dry and temp-controlled storage space.