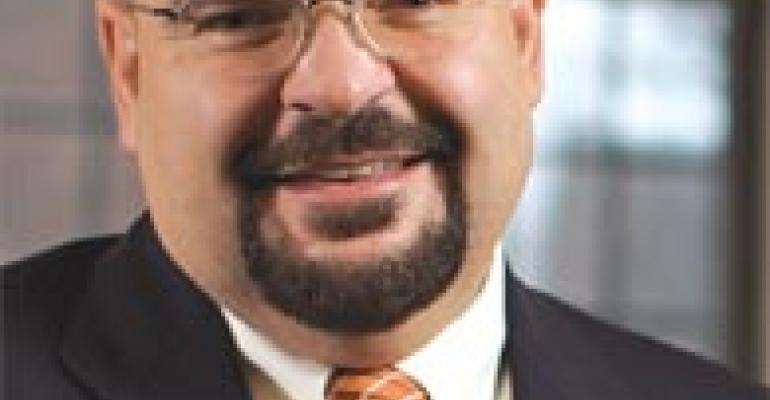 Stu Orefice waited until the right job came along before taking over his own program as director. For Orefice, that job was Princeton, where he took over as dining director in 1992 after serving for 10 years as assistant at Cornell University's highly regarded dining operation under 1989 Silver Plate winner Peg Lacey.

When Orefice took over at Princeton, it ran a traditional house-based dining service and one cash outlet that closed at five. In the 16 years since, he has overseen a reinvention of campus dining at the venerable Ivy League school (for more, see the cover story in the March 2008 FM). It is for that record of achievement that Orefice has been recognized with IFMA's 2009 Silver Plate award in the college/university category.

His list of accomplishments includes a highly successful expansion of retail dining, most notably the 2000 opening of Princeton's first campus center and its multi-station food court. More recently, he developed and opened Café Vivian, a “green café” serving only products that are organic, local, humanely raised and/or socially just.

Orefice's “green” activities include working with Princeton's “Greening Princeton” team. One achievement: a relationship with the Monterey Bay Aquarium Seafood Watch Program to ensure that only sustainable seafood is served on campus. Princeton was the first American university to join this organization.

He is also in the latter stages of a complete overhaul of Princeton's venerable house dining outlets, characterized by a chef-centric, culinary-intensive approach. The dining department had only one chef on staff when Orefice arrived on campus; it now has 14, with multiple chefs operating in each dining hall, collaborating to produce the optimum range of choice for their particular venue.

The competition makes everyone better while the customer is the ultimate winner. To keep costs from spiraling out of control, Orefice implemented an innovative bonus system that rewards sound financial performance while letting chefs earn dollars they can invest in their “restaurants.”

A Lifetime of Learning

He also turned campus catering from a sidelight into a major revenue source, boosting sales from around $400,000 a year when he started to $1.6 million now. It earns another half-million from the Paper Tiger dropoff catering program he started, which delivers party platters to campus locations.

Orefice further strengthened the focus on food by instituting a pair of upscale guest chef programs: the Garden State Series, which highlights chefs from the Tri-State area, and Great Chefs of Chicago, which brings top chefs from that city to Princeton each year.

The implementation of the chef-centric culture was achieved thanks to another of Orefice's strengths: his ability to work with the unions that represent Princeton dining staff. In exchange for putting chefs into the dining halls, replacing head cooks, he committed to opening managerial (sous chef) positions to hourly employees. Another negotiated adjustment relating to job descriptions gave Orefice the flexibility he needed with the retail dining staff.

More recently, Orefice has cooperated with Princeton's ambitious initiative to establish a series of four-year colleges to keep more upperclassmen connected to the campus community. His role: to make dining halls one of the attractions to encourage upperclassmen to continue living on campus, or at least take some of their meals there.

The massive construction/renovation project has already resulted in two new dining halls, one a fusion of two previously separate ones. Two more renovated/combined venues are slated to open this fall.

I believe that customers who live a sustainable life will pay the price for the quality and for their conscience and that's what our Sub Conscious program [which menus local, organic and humanely raised products] is all about.

I grew up in an Italian family where food was an essential part of our daily lives. Our family measured time in food. When a grandchild was born we would remember it by saying, ‘Oh, that was the night we had pasta and broccoli raab.’ At family events, we would talk more about the food than what everyone was dressed like or how the ceremony went. Quite often, after the event was over, you would find us sitting around the table talking about all the entrees and all the different foods.

My father always cooked the weekend breakfast and that's where I first got the idea, ‘Oh, it's not just women who are in the kitchen, it's not just Mom.’ I used to watch him make the pancakes, and the scrambled eggs and French toast and it really caught my interest. Then I watched what my mother cooked; she was the star of the show. The Food Network has nothing that can compete with watching Ann Orefice.

I started working as a busboy in country clubs but I found myself gravitating to the kitchen a lot, asking the chef what he was doing. I thought, ‘This is a fun career!’ I really enjoyed the enthusiasm and the feeling of preparing a great meal and providing great service. At the same time, I was taking a college-level accounting course in high school, so I put the two together and thought, ‘This can work really well.’ Later, my older brother John gave me a brochure on Cornell and said, ‘Talk to your guidance counselor about Cornell, I think it's a good fit for you.’ And the rest is history.

My first job at Cornell was as a potwasher. Later I worked my way up to student coordinator. I really enjoyed that segment and when I saw how well Cornell Dining was regarded in the industry, I thought, ‘Wow, this is fascinating!’ I saw the awards they were winning and I just felt, ‘Well, this is a lot easier than the restaurant business.’

Princeton seemed to be the right fit for me partly because of its location. It was not only closer to where my family lived, but also to the Jersey Shore, which I've always loved. I always missed that at Cornell, which was a five-hour drive from the shore. I love oceans, I'm not a lake person. In fact, I remember my first time that we went to the Finger Lakes while I was at Cornell. We were sitting by the lake and I said, ‘Where are the waves?’

Variety and flexibility were the two key ingredients I looked to change. I felt that the quality of food we were purchasing was fairly good. It was how we were serving it, in what venues and with what equipment. And then we also tried to integrate our chefs into the program.

We tried to do what we could with the existing retail program. We were located in an old library in spaces that were not designed for foodservice. It was very difficult to manage in facilities that were designed for accepting books and not accepting food.

Our president at the time, Harold Shapiro, really believed that it was important to have one location to be a place where faculty, staff and students could dine together. That was the genesis of the Frist Campus Center — and he insisted on the term ‘campus center,’ not ‘student center.’ And I believe that it worked. Within the first month when you walked in for lunch you saw faculty, you saw staff, you saw everyone. It was a campus center and not a student center — at least until about 10 pm, when it does become more of a student center…

We were thrilled that the institution provided us all the resources we needed to make the change [to the four-year system]. Had we not been provided with those resources, it would have been an extremely difficult challenge to ask students to stay with us for two more years.

When we looked to upgrade the existing program, it really was just to enhance it. We already had chefs in the kitchens, so we asked, what would it be like if we had two in every kitchen, or three, and really make it a culinary-driven program.

When I started, catering was an extension of our dining halls and our department was called ‘foodservices/catering.’ Well, my first change was to change the name of the program to Dining Services, and the second was to make the catering department its own entity.

I call the Greening Princeton group my R&D Department. For example, when students asked us, ‘Can we have sustainable seafood?’ I said, ‘Absolutely!’ and asked them to do the research. That's how Monterey Bay became a partner with Princeton,.

One of the things I learned years ago is you have to have two things in this business: a sense of humor and a good podiatrist.