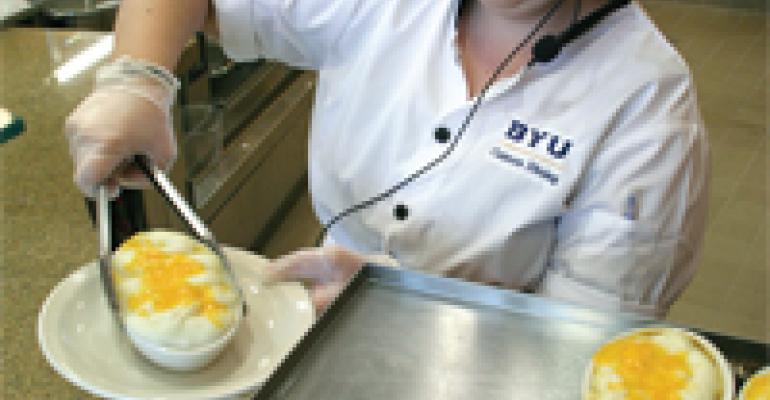 The Culinary Culture at BYU: Sustainable and Cost-Conscious

When he was hired to oversee dining services at Brigham Young University in 1997, Dean Wright had a number of goals. One was to up the &#8220;culinary quotient&#8221; of the campus's meal service.

That imperative has made its way through almost everything Wright has done in the past 12 years, but perhaps the most striking manifestation is the new Commons at Cannon Center dining venue, where five stations prepare and serve fresh, gourmet quality meals all day.

Maybe the starkest sign of the new approach is that seemingly humdrum standby, the soup. “We would go through maybe two gallons a day in the old cafeteria,” remarks Executive Chef John McDonald, CEC (Cannon replaced an older, traditional dining hall when it opened last July). “Now, we go through 20 to 30 gallons. That may be the most popular area, in fact.”

Most days, five choices, rotating on a cycle, await students. There is usually an ethnic choice (Tuscan white bean, tortilla, spicy poblano corn chowder, etc.), as well as traditional favorites like noodle soups. One that has done extremely well is a tomato soup topped with Gorgonzola cheese, McDonald offers.

Currently, the department uses a premade frozen product but it will go to its own from-scratch recipes this summer when a planned central production center opens.

In addition to soups, Cannon offers a rotating series of international foods, grill favorites, salads, wraps and traditional fare such as meats baked in a rotisserie oven. One particular rotisserie favorite is a chicken with a blackberry barbecue glaze, McDonald says.

The opening of Cannon last summer was also fortuitous because it gave the department, struggling with rising food prices, an opportunity to control food costs in a venue from the get-go. Rather than the self-serve model used in previous BYU dining halls, Cannon controls portions by pre-plating all dishes using smaller plates.

“Students can come back for more as often as they want, but this lets us control waste better,” offers McDonald.

Another cost control strategy BYU Dining uses in its retail environments is merchandising only the higher-margin items. “We decided not to have photos on our menus of any items that did not give us the contribution margin we wanted,” Wright notes. “It doesn't mean we don't have lower-margin items, it just means they are not highlighted. Why advertise something you're not making money on?”

A commitment to sustainability is another priority. “Our students expect us to be aware of our carbon footprint,” Wright says. “We try to be aware of what we purchase, and have reduce the amount of fruit, for example, that comes from long distances away.”

“We purchase as much locally grown produce during the growing season as possible,” adds McDonald, “but we are not in a prime growing area. On the other hand, the university has its own dairy, so almost all of our dairy and eggs are local, as is our beef.”

To reduce waste, pulpers have been installed in all dining locations, and used vegetable oil is collected and converted to biodiesel to run the campus grounds crew's vehicles.

“We have no wet garbage going to a landfill from BYU,” Wright says proudly. “Our next initiative is to see to it that all of our equipment will be Energy Star certified or its equivalent, and that's a commitment. Also, because we are located in a desert, we look closely at how we use water.”