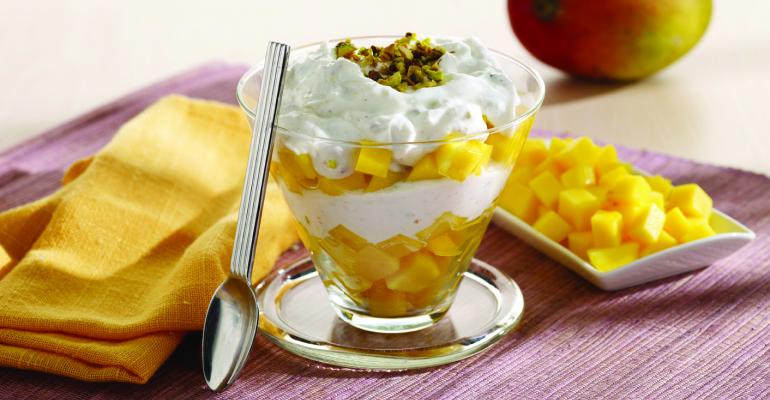 Why not go for some international intrigue to mark the end of a meal? Customers continue to seek authenticity—and a little adventure—from their dining experiences, and desserts can take advantage of this trend just as effectively as entrée items do.

Asian- and Latin-inspired desserts seem to be at the leading edge of this trend. Consider UCLA’s Feast at Rieber, a groundbreaking dining hall concept that specializes in Asian menu creations. Desserts are no exception, as Executive Pastry Chef Anthony Nigro is proud to say.

Nigro, who has been to Japan several times and “knows Japanese well enough to get by,”  built Feast's dessert menu from the ground up. Like the rest of the dining hall’s offerings, it adopts recipes and treatments from seven Asian cultures: Japanese, Korean, Chinese, Indian, Thai, Vietnamese and Hawaiian.

Nigro and Assistant Pastry Chef James Brannon worked for a year prior to the opening of the new dining facility, researching the cuisines, developing the individual recipes and seeking out sources for some of the more unusual ingredients.

Nigro drew on his travels to Japan, where “the best thing was waking up in the morning and hitting the bakeries—the panya (bread-shops),” he says. (That’s where the inspiration for Japanese Melon Bread came from. Find the recipe online, in food-management.com's recipe section). 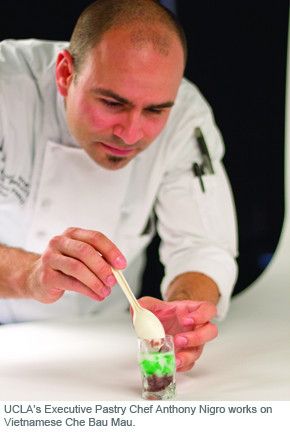 Along the way, Nigro discovered some exciting new flavors, like pandan, a leaf extract with “a really cool flavor, kind of a caramel-nut.” Red bean paste is a naturally sweet component used in multiple dessert items on the menu, so that’s one ingredient that multitasks very well. Still, there are a lot of unusual ingredients that must be sourced. And finding vendors to supply such things as basil seeds and mochi (a special pounded sticky rice) for Rieber's huge daily volume was a challenge.

The UCLA bakery is “going on all cylinders and then some,” so some items are outsourced as well. (For example, the mochi is outsourced from local Asian purveyors.) This led Nigro into the tightly knit community of Asian bakeries around LA, another chance to uncover some hidden-gem dessert ideas.

All that work paid off when the remodeled Rieber opened last fall. “It was like opening seven different restaurants with seven different menus,” Nigro says, and he notes that there is a 100 percent take-rate on authentic desserts served there.

Balance—in flavor and in presentation—are the hallmarks of the desserts, he adds. That balance is well evidenced in his Japanese Chocolate Curry Mousse, an adaptation that fuses dark, bittersweet chocolate with a traditional Japanese flavor: curry. Some of UCLA’s other signature Asian desserts include:

Vietnamese Banh Flan: "Flan is obviously a traditional dessert in many cultures. There’s a French influence in Vietnam and this is very popular. If you go to any Vietnamese bakery, they have flan."

Hawaiian Passion Fruit Cheesecake: The essence of Hawaii with passion fruit and crushed and toasted macadamia nuts in the crust.

Japanese Awayuki: A layered dessert with Jello made from calpico (well-known Japanese drink with a fermented-yogurt flavor). “We wanted to inocorporate popular flavors in Japan,” Nigro says. combined with momokan (momo = peach; kan = Jello). Light, flavorful, not too sweet.

Vietnamese Che Bau Mau: Literally means 3-colored dessert. Can be different colors, but red bean, coconut and green Jello are used here. “When I went to local Vietnamese restaurants, I saw that combination a lot so we stuck with it.”

Creating this huge variety has been a great learning experience, Nigro says, and he’s still getting surprised and learning all the time.

“I never thought I’d work in a bakery where we’d go through so much coconut milk,” he says.

A Route to More Healthful Desserts

Looking for a more healthful take on Asian desserts? Rice and tapioca puddings, with rich textures and flavored with green tea, coconut and cardamom can be ridiculously low in calories,  fat and cholesterol.

“I make Green Tea Tapioca Pudding with nonfat milk,” Jaggi says. “You just don’t need heavy cream and you don’t miss the fat because the starch makes the texture so thick and rich."

Rice puddings in India are basically a reduction—cooked until they’re creamy and delicious, then adorned with almonds or cashews. “The trick is to cook the rice very slowly so it thickens,” Jaggi says.

“In Southeast Asian, Malaysian and Indian desserts, the sweetness mostly comes from natural sources,” Jaggi notes. Just a drizzle of caramel on flan or a bit of brown sugar used while baking a pudding can add a touch of sweetness without adding too many more calories, he adds. 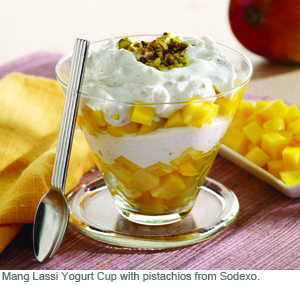 The French cooking style influenced both Latin and Asian culinary traditions. Jaggi employs that in such desserts as Mexican Pots de Crème, semi-sweet chocolate spiked with arbol chile (the chile is infused into the milk).

Chiles, Chocolate and the Luxuriously Sweet

Oregon State Chef de Cuisine Jay Perry was looking for a way to add some excitement (and also increased check averages) to the newly opened Serrano Grill concept. So he designed a weekly cycle dessert menu comprised of classic Mexican desserts with his own spin for the Serrano Grill (a Nuevo Latino concept in one of the main dining halls on campus).

Staff are enthusiastic about the sweet/spicy/decadent desserts on the menu, and are trained to talk up (not to mention upsell) the Dulche de Leche Churros, the chocolatey Boca Negra Cake and the big dessert star, Tres Leches cake (“Students, faculty and staff know that’s on Thursday,” Perry says.)

RELATED: The Creation of a Mexican Classic with a Touch of Southern California

“I wanted to stay true to what people in Mexico typically eat for dessert,” Perry says. “We didn’t reinvent the wheel, but we did make it our own.”

Hints of heat from dried chiles make Mexican desserts interesting, he adds. “When you toast an arbol chile (a chile with a smoky, subtle grassy flavor backed up by some pretty serious heat), grind it into powder and mix it into chocolate, you get a sense of heat in the back of your mouth, and people are surprised by that. Their mouth isn’t on fire, but they’re saying, ‘I never knew heat in a dessert could be so good.’”
The desserts sell out every day, thanks to smart marketing

“We build anticipation online, and in the beginning we gave out a lot of samples to get customers familiar with the desserts and to get them talking,” Perry says, adding that he made a point to educate cashiers and staff cooks about the merits of Tres Leches Cake and the other standout desserts.

At the end of the day, “by adding some cool desserts to this concept, we were able to increase our check averages from $3.95 to $4.75,” Perry says. “Desserts are the best way to add a second item so customers aren’t just getting a burrito or quesadilla.”

You’ll hear staff say to customers, “Have you tried this dessert? Oh my God, it’s so good and there are only two left.”

Here’s a sampling of the Mexican-inspired desserts on OSU’s Serrano Grill menu rotation:

Cabelleros Ricos: Translated to “rich cowboy/knight,” this Mexican bread pudding incorporates the flavors of allspice and cinnamon, all with an orange Crème Anglaise sauce. It’s very rich, so one plate is often shared between two customers.

Tres Leches Cake: This has been the most popular Mexican dessert on the menu, Perry says. It’s a dense cake with condensed cake and super rich cake batter, poked with holes and absolutely saturated with sweet deliciousness. “People know Thursdays are Tres Leches days. They know we will sell out.”

Boca Negra Cake: A cross between a cake and a pudding, this one is for your chocolate-obsessed customers. “Some chocolate desserts being served in Mexico are so dense, they’re almost like molten cakes,” Perry says, “but this is served cold.”

Dulce de Leche Churros: A house-made Mexican fritter. Traditional churro batter is piped out onto a sheet pan and filled with a creamy caramel sauce. It’s rolled in cinnamon-sugar, frozen and then deep-fried to order. “These are great to make ahead during down time,” Perry says.

Mexican Chocolate and Chili Crème Brulee with Candied Orange: French/Mexican fusion. “Everyone likes and knows crème brulee, but we wanted to use the flavors of Mexico,” Perry says. Guajillo chile provides a sneaky slow burn, mixed into sweet chocolate. One or two chiles are soaked and infused into cream, then blended with the chocolate and baked in a foil ramekin.