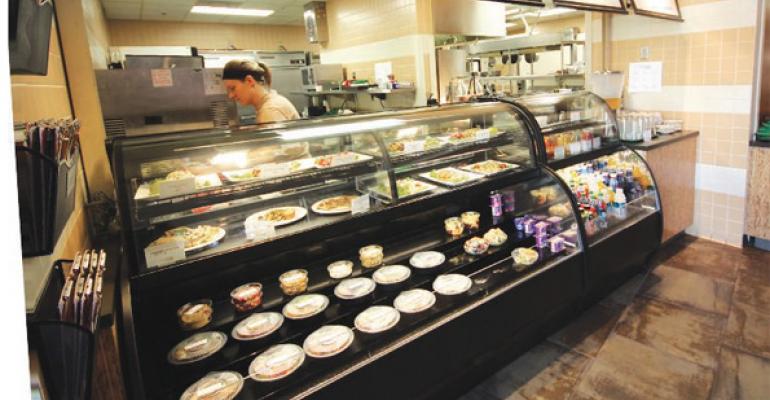 How the Greenfields fast-casual concept became the place to go for healthy food in a hurry.

The new menu and ordering system at Notre Dame’s Greenfields fast-casual concept is a response to customers’ requests for a healthier menu and faster service.

In its previous incarnation, Greenfields was known as Greenfields International Café and had some menu items that were pretty good, but, Whitaker says, “it really wasn’t that unique.”

Whole grains, crisp vegetables and fish all have starring roles on the new menu, which focuses on being healthy, seasonal, fresh and sustainable.

For the menu’s health component, Whitaker and executive chefs Karen Reynolds and Don Miller met with dietitians and developed a menu heavy on the whole grains, light on the processed foods and all hovering right around or well under 500 calories. On a typical day, there are about 170 transactions, and the check average is $8.50.

The menu is rotated on a seasonal basis, getting revamped for spring, summer, fall and winter. 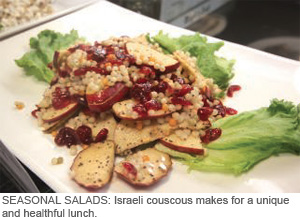 The Egg Frittata with local asparagus, country ham and grated Parmesan cheese has been a big seller this spring.

Local vegetables—zucchini and peppers in the summer—will be lightly sautéed and offered as a side, giving customers another way to eat green.

All the fish on the menu is certified sustainable as well, and Greenfields uses tilapia that is smoked in its central production support facility. The tilapia appears in a salad with fresh arugula and blueberries, and also in an Asian-inspired salad with sautéed cabbage.

The Angel-Lime Martini is the dessert star: a martini glass layered with angel food cake, lime curd and fruit. It clocks in at 360 calories.

During peak periods, lines used to crawl before the revamp. Two student employees at registers would take an order and expediters would take orders with a number to a table.

Now, a customer walks up and gets a clipboard with a menu on carbon paper, where dine in or carry out is specified, and choices are marked. Also, no item on the menu takes more than 3 minutes to prepare to order, Whitaker says. “We are trying to maximize what we can do during those peak times.”