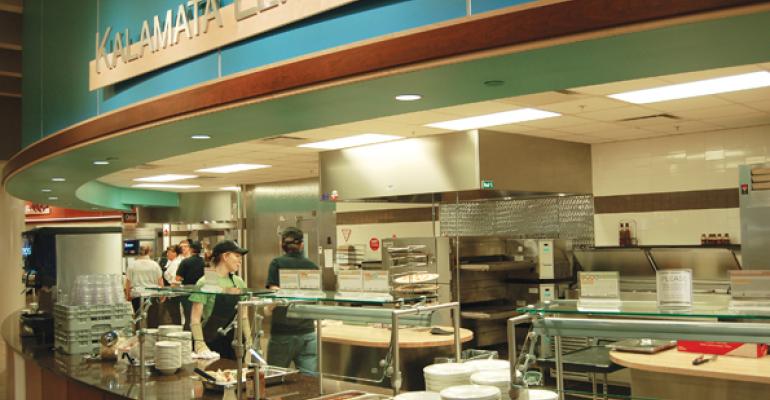 Kalamata Leaf Is among the new concepts at the renovated Nelson Court.
News & Trends>Colleges & Universities

The Nelson Commons renovation is part of a master plan for foodservice at Ohio University.

The venerable campus eatery, one of three all-you-care-to-eat dining facilities currently operating on the Athens, OH, campus of Ohio University, received a full makeover last year. The now-840-seat facility reopened last August with four new in-house concepts that are both unique to the location and provide students with additional destination dining options.

The Nelson Commons renovation is part of a master plan for foodservice at the school, which also included the addition of two nearby venues in the same complex—a 50-seat espresso bar and a 2,100-sq.ft. campus market. It also follows an earlier renovation of another on-campus AYCTE dining venue, Shively Court, three years ago. A third, Boyd Dining Hall, is scheduled to begin the planning phase for its own renovation next year.

That’s in addition to a recent upgrade to the Culinary Support Kitchen at the Central Food Facility, where centralized production operations will help drive increased efficiencies and quality for both the residential and retail dining outlets. There’s also a new catering facility, a part of the Nelson Commons complex that just opened this summer, that is expected to help boost the department’s catering revenues, currently around $1.2 million annually.

“Our multi-year capital renovations master plan is designed to elevate the dining experience for students as well as staff and visitors,” says Brian Thompson, director of auxiliaries.

“Our goal is to help the university with its recruitment and retention in support of Ohio’s overall mission and vision,” adds Richard Neumann, director of residential dining operations.

Ohio University, the oldest university in the Northwest Territory, was chartered by the state of Ohio in 1804 (the state itself was admitted to the Union only the previous year). It sits near the uptown area of the city of Athens along the shores of the Hocking River in southeastern Ohio. That uptown—so easily accessible to students and staff with only a short walk—poses the greatest challenge to Ohio University Culinary Services (OUCS).

It is a challenge that OUCS has continued to meet with creativity and efficiency. In fact, according to the annual “Operations Performance Benchmarking Survey” from the National Association of College & University Food Services (NACUFS), OUCS has ranked as one of the most efficiently-operated college dining services in the country for the past 13 years. 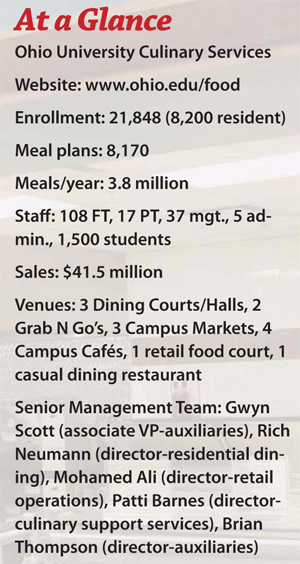 This designation, in part, reflects the OUCS team’s talents at financial management, which is characterized by departmental teamwork, vigilant procurement, effective use of labor and the efficiencies of scale made possible by a centralized production operation that recently received a $7 million upgrade to add cook-chill capabilities among other things.

“Campus Market procurement is also aided by participation in a retail product prime vendor agreement shared with other universities across the region,” says Kent Scott, associate director of retail operations.”

“We can now bulk produce items like soups and dressings and smoked meats and bakery items,” says Mary Jane Jones, associate director of the Culinary Support Center. “It also allows the department to use more local product by taking advantage of growing seasons.”

For instance, OUCS purchases Ohio-grown tomatoes in bulk when they are plentiful in late summer and uses the cook-chill capability to make sauces and soups for use later in the year.

This helps bolster OUCS’ green credentials, something also abetted by other locally sourced purchases, by the LEED Silver goal of the Nelson Commons renovations and by an extensive composting program that the school says includes the largest collegiate in-vessel composting system in the U.S.

Meanwhile, constant attention is paid to the demand side, a critical consideration given the competition from local commercial establishments. Ohio U. was an early adopter in using social media to engage with and market to its customers (it won an FM Best Concept Award for this in 2010). Such student input even helped to determine the concept mix for both the Shively and Nelson Court projects.

A Mix to Match Preferences

Four innovative concept additions to the campus dining universe illustrate the value of this hands-on approach:

Adding the “To-Go” component also allowed the department to scrap its grab-and-go section, which permitted the addition of around a hundred more seats.

The concept mix (and branded names, all created in-house) at Nelson Court differs from what the other dining halls offer. Shively Court features Mexican, home-style, deli, ice cream and vegetarian stations as well as uniquely branded grill and Italian stations with their own twist. The burger station (Brick Hill Grille), for example, features a build-your-own approach while the Italian station (Pomodoro Italian Experience) features a pasta bar among its offerings.

Nelson and Shively each attract nearly 19,000 customers a week.

The newly renovated dining venues seem to be making an impact on meal plan sales. The opening of the renovated Shively three years ago coincided with a doubling of off-campus meal plan sales in the period since, Neumann says.

Resident students can choose between Traditional and Flex 14 and 20 Meal Plans. The Flex plans allows users to purchase $6.25 worth of food in the retail markets in lieu of a meal at a board dining venue and has proven to be very popular as a result. Nearly two-thirds of residential meal plans purchased are Flex plans.

OUCS added a Faculty/Staff meal plan program a year ago to drive more sales from the university’s 4,600+ employees. The program has started slowly, but is displaying discernable growth, Neumann observes.

Also on the horizon is the implementation of the university’s 10-Year Housing Master Plan, unveiled just this spring.

The first phases will include the construction of four new residence halls, including an additional 900 beds, that are expected to open in 2015. These will be located near Nelson Court within the South Green area.

OUCS is also considering the benefits of an on-campus retail store operation that would offer retail grocery services to the apartment dwellers as well as to the many postgraduates and community members who reside near campus.