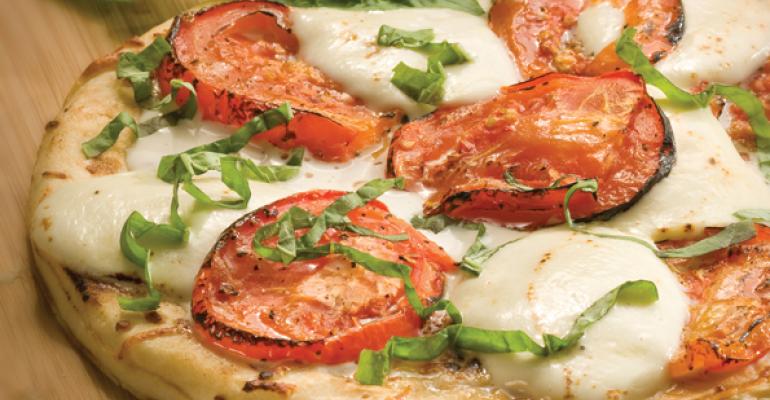 <p>Pizza pie is one of the world&rsquo;s oldest grab-and-go items. In this version, the ingredients are beautiful in their simplicity: pizza dough, olive oil, plum tomatoes, fresh mozzarella and basil.</p>
News & Trends>Colleges & Universities

Menu items marketed as distinctly Italian entice those grabbing a quick meal or snack on the run.

Only a quarter-century ago one of Americans’ favorite ethnic cuisines was known simply as “Italian.” For the masses, it shared the limelight with the other two ethnic biggies, Chinese and Mexican.

Just as Chinese of recent yesteryear is now included in today’s all-encompassing “Asian,” particularly in loftier dishes, so, too, has Italian been largely subsumed by the larger “Mediterranean.”

But lumping a truly great world cuisine with unique regional components into a vast geographic area representing cuisines as diverse as those of France’s Provence region, North Africa and the Levant cultures of the eastern Mediterranean Basin dishonors Italy’s culinary contributions to American cuisine.

Besides, Italian on its own still sells in this country. And at Colorado State University in Ft. Collins, it sells particularly well by the slice.

Indeed, sales of pizza slices are “huge” as a grab-and-go offering on campus, says Mark Petrino, senior associate director of residential dining, who adds that Italian still has cachet with student customers.

Colorado State made a big splash recently when it introduced 12 to 15 varieties of housemade gelato served daily from a newly opened C-store/grab-and-go combo outlet adjacent to Durell Dining Center. “I think it’s the mystique of a tie-in with premium ice cream,” Petrino says. “It’s overwhelmingly popular. The fact that we make it on campus helps.” At the outlet’s grand opening, the line for gelato was out the door.

Among to-go items sold in healthcare, B&I, higher education and other noncommercial operations, Italian as a cuisine identifier appeals to customers who yearn for either “old” Italian’s familiarity and nostalgia or “newer,” regional Italian’s emphasis on “fresh” coupled with an inherent perception of health that typifies Mediterranean cuisine.

“Italian often has a health halo thanks to the Mediterranean Diet,” says Kevin Dorr, senior corporate executive chef of Atlanta-based Morrison Healthcare, a member of Compass Group. “We take advantage of that with fresh herbs, olive oil, whole grains, vegetables, a seasoning or a spread. A tuna-salad sandwich made with vinaigrette instead of mayo, with black olive, fresh onion and herbs, becomes healthier and more appealing.”

Besides salads, sandwiches, soups and iced and hot beverages marketed with decidedly Italian bents, the fastest-growing grab-and-go category at Morrison accounts is snacks. “Maybe employees had another meal, but want a snack component, often a healthy one to get through the day,” Dorr says. “Or, they might not want to commit to a meal, but will check out your snacks for the savings—$2 to $3 dollars instead of $7.”