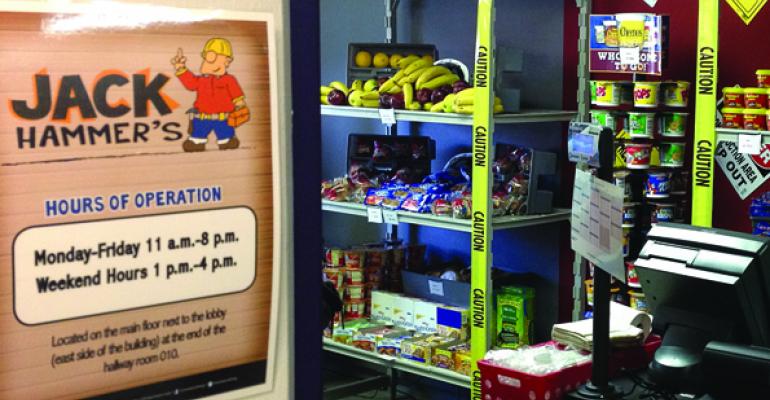 Jack’s Jumps Into the Breach

UM uses a "branded" renovation café to fill the gap while dining halls are temporarily closed.

The University of Missouri’s ongoing residence hall construction initiative has been gradually updating campus living facilities for a decade. As is typical, each time a hall is closed for renovation, it not only takes beds out of circulation but sometimes a dining venue as well.

To fill the resulting foodservice gap when the shuttered dining facility presents a hardship to students, UM deploys Jack Hammer’s, a dedicated brand (complete with its own hard-hatted mascot) that serves in place of a generic temporary facility. The concept is distinguished by touches such as the use of yellow “caution” tape festooning display racks, hard hats hanging from shelf corners and “Construction Zone” signs on the walls.

This décor fits in well with the spaces that Jack Hammer’s must operate from, which often look like construction zones.

For example, the current Jack Hammer’s operates in a miniscule 12-ft.-by10-ft. space that literally had been a dorm room inside McDavid Hall. It serves students who have temporarily lost the Mark Twain Market in the shuttered adjacent Mark Twain Hall.

Its menu includes soups and made-to-order sandwiches and salads augmented by sides, desserts, beverages, and grab-and-go options. Daily counts average 150 to 200 during the venue’s 11 a.m. to 8 p.m. weekday operating hours. (It is also open from one to four p.m. on weekends.)

Mark Twain Hall, part of Phase IV of UM's five-phase Residential Life Master Plan, is scheduled to reopen next fall with 372 beds and a brand new dining facility.  At that point, Jack Hammer’s will fade away until the next time it's needed…