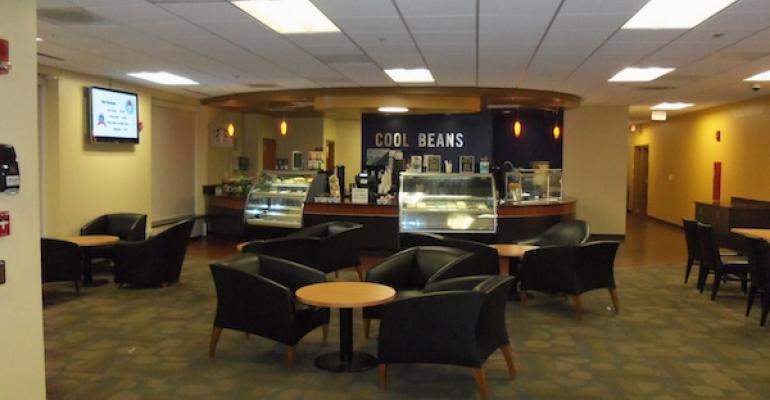 Livin’ for the Weekend…

The Cool Beans ice cream/coffee shop is now picking up business as a late night dining venue on weekends at the University of Maryland.

The Cool Beans ice cream/coffee shop used to have a hard time securing sufficient business, located as it was directly outside the 251 North all-you-care-to-eat dining hall on the campus of the University of Maryland in College Park. But business is now picking up even though the location is open fewer hours than before. The key is, what hours we’re talking about...

“We decided that instead of fighting for business at a time when so many of our other locations were open, we’d shift Cool Beans to a time when we had little else going on,” explains Colleen Wright-Riva, director of dining services at the school. “On Friday and Saturday nights, the only place open on campus is one of our c-stores, which is a 24-hour location, but it doesn’t serve any hot food.”

Wright-Riva figured that students coming back to campus after an evening of fun, or those who had a late-night craving for something tasty or filling, would provide a sufficient customer base for a more substantial dining outlet.

And so the nocternal version of Cool Beans was born. The location is now open only on Friday and Saturday nights from 9 p.m. to 3 a.m. To its existing menu of coffee drinks and ice cream was added a selection of fresh specialty panini sandwiches like honey mesquite, spicy Moroccan, pulled pork, three cheese and even peanut butter/chocolate/banana, along with milkshakes, jumbo cookies and other sweet treats.

The location helps market itself since “students have to go past it when returning to campus,” Wright-Riva says. She says counts have been growing quickly in the few weeks it has been open as awareness has increased, goosed along by promotion efforts like fliers, table tents and Facebook alerts.