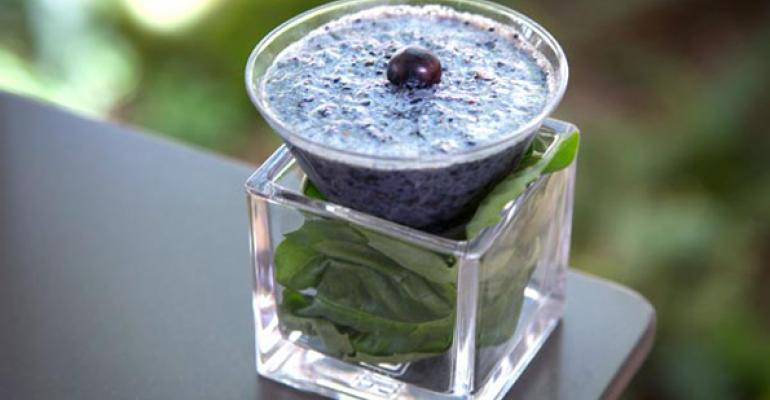 The almond-milk-berry smoothie makes use of almonds, not cow's milk. The blueberries are frozen from last season, not flown in from another continent.
News & Trends>Colleges & Universities

Reducing carbon footprint with earth-friendly menu items at 500 college and B&I cafes across the country.

A different kind of ‘low carb’ diet was the focus of Earth Day for thousands of college students and employees. In this case, low carb means low carbon, as in the carbon emissions associated with bringing food to the table.

Every year since 2008, Bon Appetit Management Co. has hosted Low Carbon Diet Day, using food as a vehicle for starting conversations about the environmental impact of crops such as corn, wheat, rice, fruit, dairy and coffee.

Edamame burgers, cheeseless pizzas and almond-milk-fruit smoothies were the climate-conscious stars of cooking demos at 500 accounts in 32 states.

Each item is an edible allegory of planet-conscious eating.

The topping on the edamame burger was a study in reducing food waste. Carrots were washed and then peeled. The peels were then dusted with sumac powder and oven dried, adding texture, Apthorpe says.

“It makes the point that we don’t have to throw away all this food,” he says.

The almond milk in the smoothie is a planet-friendly substitute for cow’s milk, Maisie Greenawalt, vice president of strategy, Bon Appetit, wrote in the Huffington Post.

“Cow’s milk…is a high-carbon product—of all food animals, cows produce the most methane, a greenhouse gas that is accelerating climate change,” Greenawalt writes. “Meanwhile, instead of using air-freighted berries from another continent, we can use berries that were flash-frozen last summer at the peak of ripeness, retaining all of their flavor and nutrients.”

A pizza with no cheese sounds…interesting. But the result was delicious, Apthorpe says. Instead of high-carbon cow’s milk cheese, a parsley-pecan pesto gave the pizza great texture and flavor.

“If we put our creativity to use, we can make these changes every day,” he says.