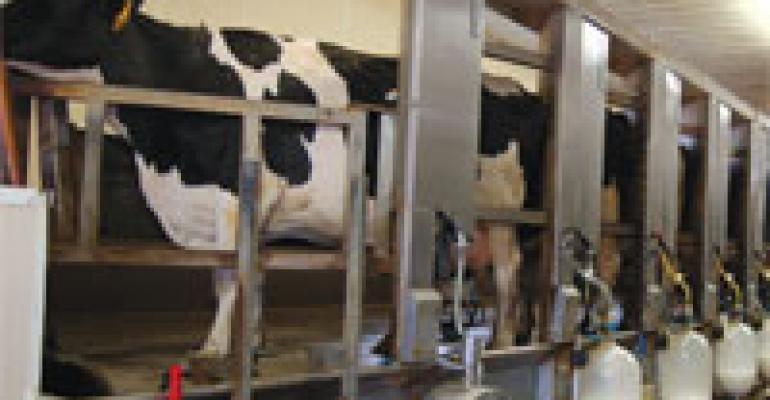 Middlebury College Dining Services currently buys about a quarter of its product from what it terms “local” suppliers, that is, suppliers based in or operating in the state of Vermont (and 40 percent of that, representing 10 percent of total purchases, is from Addison County, where the college is located). With food purchases of around $4 million annually, that's about a million dollars staying in-state.

It is an imperative that accords with the college's mission to be as sustainable as possible. Products sourced locally travel fewer food miles, reducing their carbon footprint, an important component in Middlebury College's goal of becoming carbon neutral by 2016.

(For a dramatic illustration of this, go the the school's Food Mapping Project website which traces the paths taken by the ingredients for a handful of representative meals to the campus on a Google Earth based map.)

The Dining Services works with locally based Burlington Food Service as its prime distributor, which in turn buys, consolidates and delivers product from Vermont-based suppliers. Of course, Burlington also carries national brands in categories for which there is no local supplier.

Middlebury Dining Services is actively seeking to increase its local purchasing, not just to meet its own local sourcing goals but to spur more localized production overall. “Our size and purchasing volume make us a key player in helping local producers,” says Dining Director Matthew Biette. Of course, he adds, the school also expects pricing commensurate with its volume commitments to keep its own financials in balance, especially in an era of tighter budgets.

To encourage smaller growers, Middlebury Dining is working with several groups like the Addison County Local Food Collaborative that are looking to aggregate and consolidate production from small farms that have no other realistic way to supply large institutional customers like Middlebury by themselves.

Some of the planned initiatives through these cooperatives include having Middlebury contract for specific crops with farmers, giving them a commitment that eases the financial risk of planting.

Even with Vermont's relatively short growing season, the yield can be significant. Between the bounty of late summer, an emphasis on hardier crops that thrive into the late fall and the use of effective storage, Middlebury can get locally grown produce onto its menus for a good part of the school year. Local root vegetables are available into January and local apples practically year round, to cite two examples.

In other categories that are less climate dependent, the college has made greater headway in securing local supply sources. These range from state specialties like cider, maple syrup, cheese and ice cream (this is the home state of Ben & Jerry's, after all) to some meats and baked goods.

The school is looking to increase its purchases of locally raised beef and locally grown grains. Currently, it buys only bulk ground beef from a local supplier.