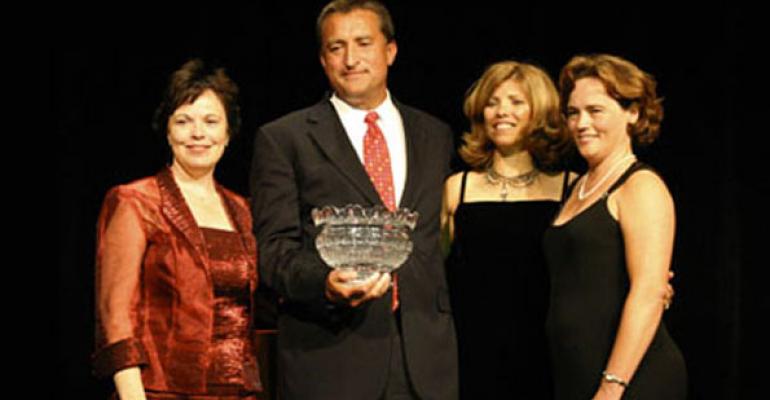 Long-tenured Notre Dame director of foodservices David Prentkowski left a legacy of achievement and influence on the campus dining segment.

David R. Prentkowski, Director of Dining Services at the University of Notre Dame, passed away suddenly on the evening of August 9 at his home in South Bend, IN. He was 55.

Prentkowski was diagnosed with pancreatic cancer in 2011 and had been undergoing aggressive treatment for it since then as he continued to oversee Notre Dame’s foodservice operations. During his illness, Prentkowski showed a courageous willingness to engage others in the issues related to coping with a terminal disease, openly sharing his personal experience and actively supporting fundraising initiatives such as Notre Dame’s 2012 Relay for Life, an annual event to raise funds for cancer research. He often mentioned his gratitude for the support of his colleagues, and particularly for that of Notre Dame’s emeritus president, Rev. Theodore M. Hesburgh, C.S.C., with whom he often visited.

A long-serving member of NACUFS (National Association of College and University Food Services), he held many volunteer and officer positions over the years. Among other recognitions, he was a past recipient of the IFMA Silver Plate award, (story here) as well as NACUF's top honor, the Theodore W. Minah award, in 2006.  He was referred to good-naturedly by many who knew him in the organization as its “By-Laws Committee Chair for Life.”

Prentkowski remained active in the association until his untimely death. At its annual conference in July, he participated in the presentation of its David R. Prentkowski Lifetime Distinguished Member award, which earlier this year was renamed in his honor (video here; and a slide show photographs taken of Prentkowski in the course of NACUFS activities here).

Prentkowski was born in South Bend and received his B.S. and M.S. degrees in Restaurant, Hotel and Institutional Management from Purdue University. Early in his career, he worked for a Stouffers hotel in St. Louis, Purdue’s Memorial Union, the University of Utah in Salt Lake, and the University of Michigan in Ann Arbor.  In an interview, he told Food Management his first foodservice job was as a grill cook at the Toasty Shop, a local, family-owned restaurant in his hometown. He assumed his position at the University of Notre Dame in 1990.

There, he oversaw an operation employing more than 500 employees and an 8,000-student residential dining program. It included 29 food service units and 25 campus buildings; a central food warehousing and production facility; campus catering operations; resident food services for the Congregation of Holy Cross (including two residences, a seminary and a nursing home); and food services for the campus student health center and child care center. For many years he also oversaw an exceptional athletic concessions program, one of which he was extremely proud.

Frank Gladu, associate vice president at Sewanee (The University of the South) and another long-time friend and colleage, adds, "Dave was a true professional, someone who always wanted to push the bar higher wanted the absolute best for the University of Notre Dame. At the same time, he always had the time to collaborate. It didn’t matter how small or large the project, he wanted to serve with distinction. His passion spilled over to the entire NACUFS community. He was always engaged and pushing forward and wanted to improve everything he touched…"

“The program that David led at Notre Dame was a benchmark for many,” observes Gary Goldberg, formerly director of foodservice at Purdue and now director of dining services and administration at University of AkronThe two had come to know each other through years of mutual involvement with Prentkowski's alma mater. “The quality of culinary expertise there is a tribute to his belief in the importance of ensuring quality dining opportunities for his community, a and was especially manifested in his department’s catering services. Professionally, he was most proud of the Legends venue, which he created. Personally, he was most proud of his family. On a personal level, while Dave was a peer, he was also a mentor. His continuing influence over the years remains a testament to his vision, leadership and ability to create change at a profoundly traditional University.”

Dean Wright, director of foodservices at Brigham Young University, summed up the sentiments of many. "David was always the first to reach out to others and his life mirrored the teaching that serving others is the highest calling one can have.  He is a great personal friend and will be deeply missed by our industry."

Asked once in an FM interview if he would do anything differently in preparing for his career as a foodservice director, Prentkowski said, “I would have obtained some more advanced culinary training early on. That would have helped later, when I needed to oversee campus dining programs as they have developed in the intervening years.” He said that one of his strongest early role models was Charlie Dunn, the foodservice director at Purdue’s Memorial Union. “He took me under his wing, treated me like a son, gave me good advice, and set a good example in dealing with people.”

On a personal note, Prentkowski said his most prized material possession was a set of hand carpenter tools that belonged to his grandfather. A long-time runner, he added that “If I weren’t in foodservice, I’d probably be in management with some athletic or sports program.” Asked what he would say if writing his own epitaph, he offered: “He made a difference and had fun while he did it.”

During his 1996-1997 tenure as President of NACUFS, Prentkowski focused on efforts to upgrade the image of campus dining to college administrators and to helping NACUFS eliminate the duplication of efforts between its national organization and regional chapters.

A visitation/reception will be held between 5:00-8:00 PM on Monday, August 12 at the Palmer Funeral Home, Hickey Chapel (palmerfuneralhomes.com)  at 17131 Cleveland Rd, South Bend, IN. A funeral mass will be held at 9:30 a.m. on Tuesday morning at the Basilica of the Sacred Heart on the University of Notre Dame campus. Contributions in his memory may be offered to American Cancer Society, 130 Red Coach Drive, Mishawaka, IN 46545 or to the Center for Hospice Care, 111 Sunnybrook Court, South Bend, IN 46637.