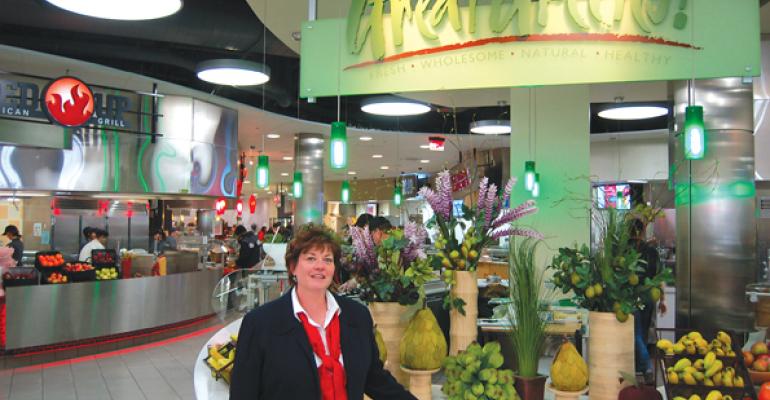 The University of Wisconsin at Madison is nearing completion of a complete overhaul of its residential dining program.

Befitting its heartland location, the University of Wisconsin at Madison had historically maintained a very traditional approach to campus dining.

The school is nearing completion of a complete overhaul of its residential dining program, one that has so far produced three modern marketplace style dining halls to replace UW-Madison’s traditional cafeterias. The marketplaces sparkle with freshly made dishes, many made in front of customers, exotic food choices served from commercial style branded stations and plenty of variety at each meal period.

The upgrade is needed because campus dining at UWM is all a la carte, so dining outlets need to be attractive to draw patrons. There is competition not just from off-campus eateries but internally. Residential dining, operated by the Dining & Culinary Services unit of the Division of University Housing, is only one of three campus dining operations.

There is also the Wisconsin Union, which operates major food courts in its Memorial Union and Union South buildings, and the foodservice arm of the athletics department, which oversees concessions and catering at campus sports facilities.

The new marketplaces have boosted customer counts and revenues significantly for Dining & Culinary Services, says Joie Schoonover, who is director of the unit as well as assistant director of housing. The two new marketplaces that opened this past fall have boosted resident student sales by 52% and 20%, respectively, and non-resident sales by 167%(!) and 68%, respectively.

About a decade ago, UW-Madison’s Div. of University Housing developed an ambitious Master Plan that envisioned a whole new way of doing business that emphasized customer experience and a high level of culinary sophistication (reinforced five years ago by a change in the department name to “Dining & Culinary Services”).

This would be offered not from the department’s traditional venues but from a network of new marketplace style dining sites strategically located around the campus where customers could see their food being prepared, get customized meal choices and have plenty of options. The department would also develop brands to distinguish its offerings in customers’ minds.

Today, these brands are found both on individual food stations in the marketplaces and on standalone operations such as coffee shops (Bean & Creamery), c-stores (Flamingo Run) and pizza shops (Capital City Pizza).

“As we planned for the Marketplace operations, we utilized the services of the Culinary Institute of America to increase the culinary expertise of our staff,” says Schoonover. “Staff worked with the CIA to learn new techniques for food preparation and service in front of the customer. This was the beginning of our made-to-order stations.”

The first marketplace, Rheta’s, opened in 2007 and served as a pilot site yielding important real-world lessons that were incorporated into subsequent projects. The dining team also looked at retail environments outside the college dining universe for models.

“We looked at a museum, a grocery store, a dining operation in a bank, as well as other quick service restaurants in the Chicago Land area,” Schoonover says. “We were looking for operations having functionality and efficiency that would continue to attract customers for years to come."

Rheta’s was followed by two more marketplace openings last fall, Gordon Avenue Market (located in Gordon Dining and Event Center)  and Four Lakes Market. A fourth, Carson’s Market, is slated to debut this summer. One traditional old-style dining hall—Elizabeth Waters—remains open but is scheduled for conversion to a marketplace operating model (opening in January 2015) in the next couple years as well.

Each marketplace location also includes separate Bean & Creamery coffee shop and Flamingo Run c-store outlets (one more of each will open this fall following a renovation at the Holt Commons location-Holt has a Bean and Creamery, Carson’s has the Flamingo Run). They can maintain their own operating hours distinct from the adjacent marketplace in some instances, providing foodservice earlier in the morning or later into the evening.

Dining & Culinary Services also operates Newell’s Deli, a standalone deli that functions as a kind of mini marketplace in that its menu encompasses breakfast bakery items, pizza, burgers and fries and even a few hot entrees in addition to freshly made sandwiches and a salad bar.

Each marketplace has a distinct mix of concepts and its own menu. Each also offers something unique, whether it’s a station concept or a particular kind of dish.

“They are more like destination restaurants,” explains Schoonover. “You can choose which one to go to depending on what you’re in the mood for in the same way you would choose a restaurant.”

Carson’s will specialize in Mediterranean dishes from its Global Kitchen station.

UMD Chefs Strut Their Stuff at Farmers Market
May 07, 2013
CSU to Use Food Trucks to Bridge Renovation Dining Gap
May 10, 2013