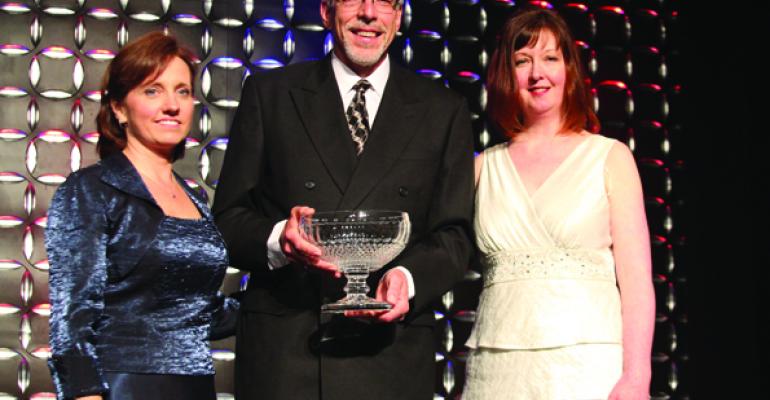 NACUFS Looks to a Year of Transition

Members of the National Association of College and University Foodservices gathered in Boston on July 10-14 for the organization's annual conference, all looking to take full advantage of campus dining's premier educational and networking event.

The event was record-breaking in several respects, with more than 747 operator members attending, 230 of them first-timers, and with 235 institutional member organizations represented. It also served as a key transitionary event, with members bidding a fond and public farewell to retiring executive director Joe Spina. At the same time,  officers, board members and staff worked behind the scenes to facilitate the group's succession plans. (A formal announcement introducing the new, incoming executive director, Gretchen Couraud, CAE, CFRE, was made two weeks later in late July).

The top medal in NACUFS' annual Culinary Competition went to Notre Dame's Laura Marie Strunk, interviewed after her win here. You can view an animated slide show of the competition here and read other coverage of the culinary event here: "Fear the Ear: How a Last Minute Substitute Took Home the Silver".

In farewell remarks, Spina thanked members for their support and friendship over his 22-year tenure and suggested the group will face three major challenges in coming years.

The first, he said, is to groom a new generation of leaders to replace the wave of baby boomers beginning to retire now; the second is to provide continued high levels of value and member service to retain member loyalty and volunteerism; the third will be to establish a long term and sustainable model for the size and reach of the association, a key  job "for the leaders of tomorrow.

"I can tell you I have learned to deeply appreciate how hard you work and how much you do to build your campus cultures and organizations," Spina said. I leave with tremendous respect for you."

Top College Chefs Compete Against the Clock, Other Regions
Jul 25, 2012

Fear the Ear: How a Last-Minute Substitute Took Home the Silver
Jul 25, 2012