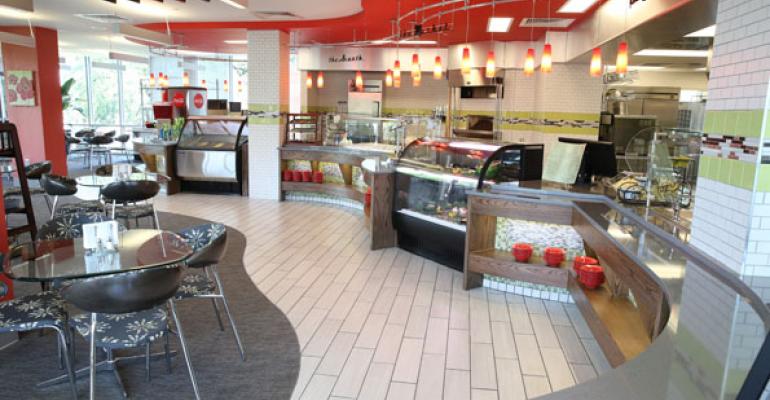 The Niche, a new dining commons at UGA is a sleek space with a grill, a pizza oven, gourmet prepared meals, gelato and more.
News & Trends>Colleges & Universities

Faced with limitations in terms of space for production, UGA Food Services nevertheless wanted to make sure a new dining commons would find its ‘niche.’

The location is on UGA’s Health Science Campus, apart from the main campus. A former Navy training center was acquired by UGA and converted into a medical/science center that houses the schools of Health Science and Public Health.

Classes began there last year, but this year the rest of the center has been converted into housing, which meant about 100 students would need residential foodservice.

Seating and servery stations took up most of the available space, "so there was no room for a production kitchen,” says Jeanne Fry, director of food services. Instead, the operation specializes in cook-to-order offerings with a grill and a pizza oven and items finished off from product made in other UGA campus kitchens.

“We knew we couldn’t offer all the variety that we do at the other dining commons,” Fry says. “But we wanted the menu to be something special that you can’t find anywhere else.” 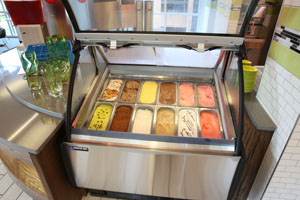 “The most exciting thing about the Niche is cooking to order and plating to order,” Varin says. “We’re focusing not only on the quality of the food but also the plating, which customers really appreciate.”

The Niche serves not only students who live in the new residence facilities but also students who cross campus to take classes there, plus faculty/staff and guests. Meal plan participants can use their plan and guests pay cash. It's open Monday through Friday between 7 am and 2:30 pm. So far, the operation has been ringing up about 350 transactions  a day.

Three concepts serve to offer variety throughout the day: The Grill, the Market and the Hearth each play a different role, coming together with many great dining options for the medical and health students.

There’s a grill concept that works hard in the small space. At breakfast, diners can find basics like eggs, pancakes and bacon. At 10:30 a.m. the grill becomes one of the lunch features.

Signature lunch items from the grill include hand-formed hamburger patties on a pretzel bun, a ribeye sandwich with a sweet Vidalia onion relish and cold deli sandwiches. 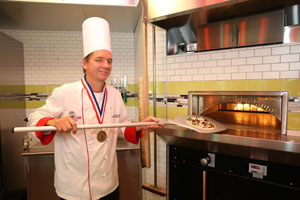 At the Hearth concept, cooked-to-order pizzas reign supreme. There is a stone hearth oven blazing away, and individuals go up to the counter to choose their sauce and toppings. About 5 minutes later, they walk away with a hot pizza that’s personalized.

There is also a gelato bar, with 12 flavors of gelato and three sorbets, that has been very popular, Varin says.

The third concept at the Niche is the Market, an upscale eatery with a bistro feel. Jittery Joe’s Coffee, a local coffee roaster, is offered and brand recognition means a lot to the java heads who have been frequenting it, Varin says. “It gives total perceived value.”

“The Market is really different than anything we’ve done before in terms of very upscale entrees, sides and prepared salads,” Varin says, adding that it’s inspired by the prepared entrée section of Whole Foods. Items include fish en papillote, asparagus with prosciutto, quinoa salads with pine nuts and artichoke hearts, and even Beef Wellington.

The dinner rolls at the Market have a special story behind them: They’re made at Bread for Life, a local nonprofit that helps disadvantaged adults learn a skill and find work.

Branding has also been a focus at the Niche, making it stand out from the other venues at the main campus, Fry says.