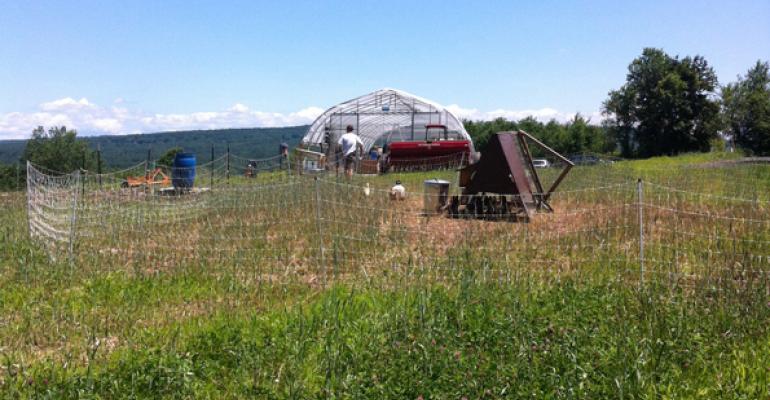 On the bucolic Massachusetts campus of Amherst College, four acres of land have become fertile ground for not only fresh local produce, but also an enriching collaboration between farmers, students, professors and the land.

Four acres of farm land, a 10-minute walk up a hill from campus, has belonged to the college for years, and until recently, had been leased out to local farmers. About a year ago, stakeholders in the college, including Food Service Director Charlie Thompson, started thinking about how the land could be used in a way that would build a stronger connection between farm and college.

“A farm on campus lined up with our mission as a department, which is moving towards more whole, fresh food,” Thompson says. “And here we have a farm, a quarter mile from the dining hall. The time was right to do more.”

Jim Brassord, director of facilities and associate treasurer at Amherst, was on board.

“A committee had been formed a couple years ago proposing that the college would oversee the development of the farm, but it had trouble getting off the ground,” Brassord says. Finally, with a new administration in place, the committee got the go-ahead.

A request went out to local farmers, and more than 20 proposals came back. They submitted business plans on how they would develop the land and also engage with the college in terms of education, curriculum and volunteer opportunities. Also, the college would be the main customer, in other words, having the largest share in a CSA (community supported agriculture).

Two farmers stood apart from the crop of applicants.  Tobin Porter-Brown and Peter McClain (pictured, l-r) proposed to change the business model: they would develop the four acres as the “core field” where students could walk from campus, but they would also add a “production field,” just down the road: 20 more acres, about a mile to the south, also owned by the school. This would ensure that enough produce would be provided.

“Peter and Tobin both come to this not only with a farming perspective, but they also know what it means to work in an educational setting,” Brassord says.

A five-year lease was drawn up for the farm, now known as the Book & Plow Farm, a greenhouse was built, a few chickens and pigs moved in, and a blowout farm-to-table dinner event in the spring was huge. About 300 people were anticipated, but more than 1,200 showed up. Excitement was in bloom.

As summer began, so did the intensive collaboration between the farm and dining services. The farmers developed the land, planting and studying the soil, considering irrigation and hoping for rain (which they got).

Seasonal menus that are in tune with different crop cycles were planned, taking into account that most students aren’t there when the beginning of harvest occurs.

Executive Chef Jeremy Roush began writing recipes and planning menus with fresh local produce in mind. He anticipates getting about 40,000 lbs. of produce annually, but there is guesswork involved, especially in the farm’s infancy.

“This year is experimental in determining the farm yield vs. how much we’ll incorporate onto menus and how much we’ll process and maybe preserve,” Roush says. “For example, when we’re blessed with a bumper crop of zucchini, how do we handle that?”

Getting so much fresh produce means thinking about how training processes for kitchen staff will need to change to address that, since many produce items have been pre-washed or pre-cut in the past.

“The variety of what we’re going to be getting means redevelopment of our staff, going back to washing and knife skills and the safe way to hold produce,” Roush says. “But it’s exciting, because that means going back to our culinary roots.”

“We’ve had a lot of conversations about not only what would be grown, but addressing the man power needed, for instance, to peel garlic when we had been using pre-peeled garlic before, or to dice winter squash when we would get pre-diced,” Thompson says.

So far, choosing things that are easy to process has been a good answer: instead of a labor-intensive squash like Butternut, with its hard skin, dining services orders more spaghetti squash or acorn squash (easier to work with).

Also, dining services is thinking about partnering with a local production co-op to help with abundant produce.

Near the end of the summer, before students arrived on campus, 100 lbs. of basil found their way to the kitchen, so Roush made pesto that can be used to zest up pasta dishes or grilled vegetables throughout the school year. Tomato purees have also been frozen—farm-fresh flavor will be present on winter pasta dishes.

As students arrived on campus, they were greeted with a luncheon that featured lettuce, watermelon and more from the Book & Plow Farm, which was also noted in orientation packets. Signage in the dining hall will always denote the super fresh, super local produce as well, Thompson says.

Dining services is planning several “Select Dinners,” in which about 50 students’ names are drawn to participate in a luxury seasonal four-course meal made with produce from the farm.

The farm is growing on the academic side as well. Over the summer, five paid student interns worked at the farm, learning about the business principles of farming and also the specifics of organic farming.

“It’s been a really fun process, showing them what it’s like to be on a farm, and then seeing the production that goes on in the dining hall just takes it one step further,” Porter-Brown says.

Faculty members have been conducting biology research on the farm, and bringing classes out for hands-on learning opportunities on soil composition and more. An academic from a nearby college working on her senior project about bees has constructed a few apiaries along the edge of the land, keeping things buzzing.

Everyone involved hopes the farm will be a resource for the college and community as it nears maturity in a few years and all the hard work really pays off.

“We’ve been working really hard to move in this direction,” Thompson says.

To learn more, check out the farm's blog.