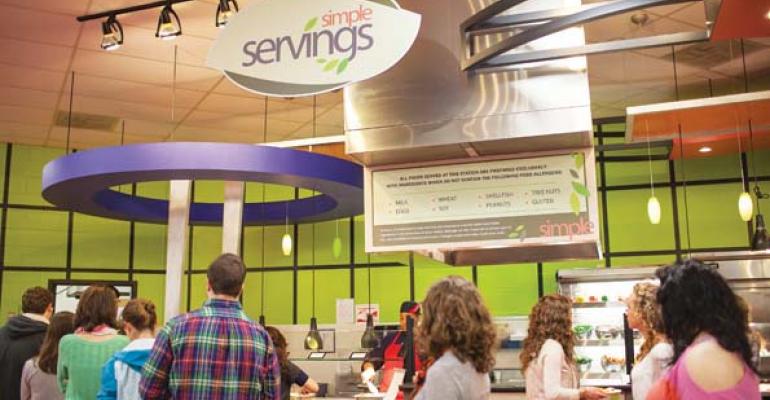 That destination, Simple Servings, was originally developed at Sodexo’s operation at the University of Northern Arizona, and has been expanded to nine other sites in the current school year. The company has plans to implement it in up to 30 more next fall.

Designed to be part of an all-you-care-to-eat dining hall mix (though a standalone retail version may be developed in the future), Simple Servings menus meal options guaranteed not to contain even traces of seven of the eight most common food allergens: milk, eggs, soy, tree nuts, peanuts, shellfish, and wheat. (The eighth is fin fish, which the company decided was too difficult to eliminate without unduly hampering menu flexibility.)

The foods are prepared simply and with few ingredients, says Beth Winthrop, product development director for wellness for Sodexo Education-Campus. “You can look at the dish and pretty much see everything in it,” she says.

The menu consists of one main dish, one or two sides and two or three vegetables per meal period. They change from lunch to dinner to provide variety (it is not open for breakfast).

The recipes are heavy on meat as a central ingredient. The sides are gluten-free starches like quinoa, sweet potato, corn and “interesting rices.”

“We try to stay with ingredients you can readily buy rather than specialty items like gluten-free products that can be expensive,” says Winthrop. Sodexo has developed a central database for Simple servings consisting at present of nearly 800 recipes.

The station at each account has its own prep equipment, pots and pans and utensils to avoid any accidental contamination.