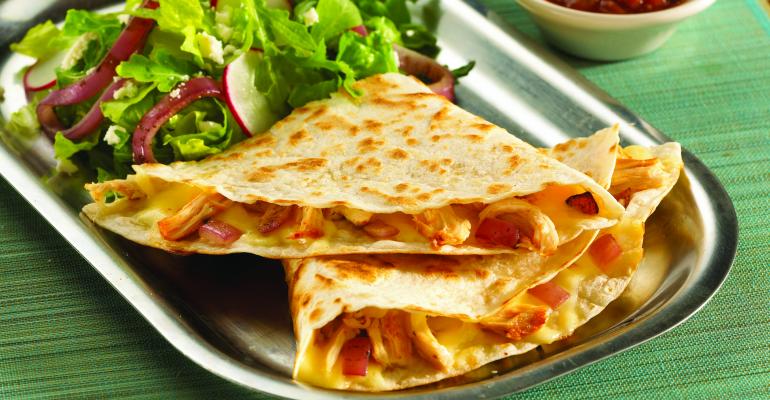 This quesedilla dish is one of the menu items featured at the new Frontera Fresco concept from Rick Bayless at Northwestern University.
News & Trends>Colleges & Universities

“We’re thrilled to partner with Rick on his campus dining concept for Frontera Fresco,” says Steve Mangan, resident district manager for nuCuisine, a collaborative partnership run by Northwestern and Sodexo whose executive chefs provide the campus with international cuisines, made-to-order entrées and attractive “destination dining” experiences. “Northwestern is a community of dynamic cultures from across the globe. Rick’s fresh twist on Mexican cuisine is an ideal fit for the Northwestern University community.”

“Frontera Fresco is a great addition to our retail offering at Northwestern," Mangan adds. "It will strengthen our commitment to expansion of fresh, seasonal, and local products. At the same time it adds to our focus on culinary expertise and staff development campus wide as we work to become an integral part of the Chicago food scene.”

Instead of relying on larger food distributors, Bayless is committed to using local food and produce from farmers within a 100-mile radius of his restaurants.  “We will continue using local products at the Norris location,” Mangan emphasizes.

“The produce, the cheeses, and the meats, will be from farmers who are supported by the Frontera Farmer Foundation, which gives grant money directly to small farms to build greenhouses and buy supplies that in turn go into making the produce that is plated at the restaurants,” adds Stacy Dixon, Frontera’s director of development and marketing.

TAGS: Sodexo News & Trends
0 comments
Hide comments
Recommended Reading
Northwestern University has been named the most vegetarian friendly college in the nation by peta2, the youth division of the People For The Ethical Treatment of Animals (PETA) vegetarian advocacy group
Nov 14, 2007