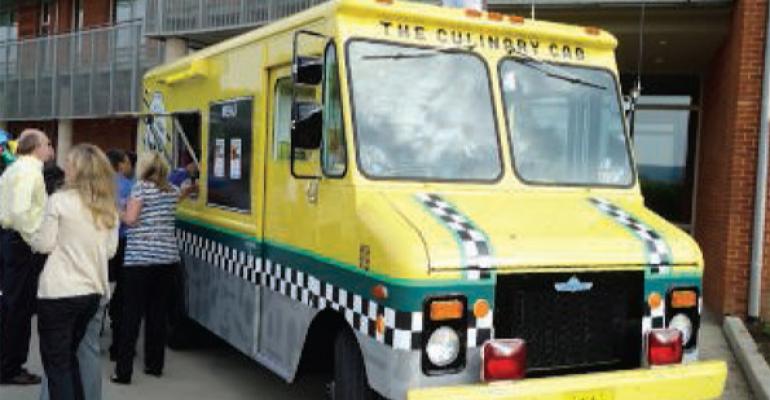 Someone Call a Cab?

Parkhurst Dining Services is rolling a mobile restaurant called the Culinary Cab at Mercyhurst University in Erie, PA, that offers a variety of menu items to the campus community and beyond. Starting in August, the truck will offer late-night on-campus fare on Tursday, Friday and Saturday nights from 11 p.m. to 2 a.m. It will also make visits to Mercyhurst’s North East campus and at local events.

“Food trucks are really hot right now and they are growing in popular- ity on college campuses,” says Kim Novak, general manager for Parkhurst’s Mercyhurst operation. “We want to be cutting-edge in what we do at Mercy- hurst and we thought this would be a great opportunity.”

The menu currently includes a Strawberry Shortcake made the old-fashioned way with biscuits. Priced at $3.50, it was a big hit when e Culinary Cab made its downtown debut in mid June. Other menu items included a Hog Heaven Pulled Pork Sandwich “curbed with coleslaw and chips” and a Walk ing Fresca Wrap with a choice of pork, chicken or beans. both for $5.

For salad lovers, there was the Chopped Fresca Salad for $5 that featured crisp greens made with a choice of pork, chicken or beans “riding with Pico de Gallo and Cilantro Lime Dressing.”

Novak said the menu will change, but will always include healthy options, including produce from the university’s West campus garden. Until the fall term begins, Culinary Cab has been operating on the streets of downtown Erie during lunchtime, gathering experience in preparation for its campus duties.

Its location and times of operation are communicated through Twitter (@TheCulinaryCab) and the Mercyhurst University Dining Services.