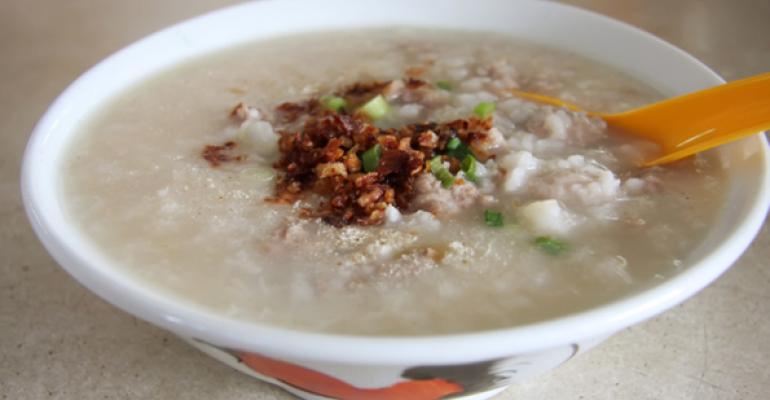 A few months ago, the dining staff at the University of New Hampshire noticed that the Chinese students from Navitas, an international study abroad program, didn’t like the food.

“The first thing we noticed is that they would use the hot water provided for tea to put into noodle bowls that weren’t hot enough,” says Jon Plodzik, director of dining services at UNH. “They kept telling us, ‘Hotter, hotter, hotter.’”

The students also communicated with their actions: bypassing the dining halls entirely and heading to the Asian markets and Chinese restaurants that are thriving nearby in the town of Durham, NC.

Clearly, a different focus was needed if Plodzik and his team wanted to effectively serve this segment of the community.

“We decided, ‘We’re really going to try and get in tune with what these students want,’” he says.

The first stop was Nei Wei, a popular Chinese restaurant in town.

“As soon as we walked in, we saw a bunch of our Navitas students eating at a table there,” says Todd Sweet, executive chef.

Having clearly found the right place, the group sat down in a back room, where they ordered a big selection from the menu, asking questions as they went.

“We asked if there were any dishes that weren’t on the menu, that people from China might like, but Westerners may not order,” Sweet says.

Sure enough, out came book tripe (the third compartment of a cow’s stomach) with fermented black bean paste. While tripe may not make it onto the UNH menu, the flavor profile certainly could.

“That’s what I was looking for—the flavor profile. I could use that with chicken tenders,” Sweet says. “I probably won’t offer tripe on the buffet, but I could see this as a dish for a special meal.”

“That stands for ‘ginger, garlic and scallions,’” he says. Much like the mirepoix in classical French cooking or the Trinity in Cajun/Creole kitchens, “GGS” is the doorway to flavor in Asian cuisine.

“Also, just talking to the students provided us with some great ideas; just asking them, ‘What do you want?’” Sweet says. One thing that they wanted was congee, a savory breakfast porridge.

“Breakfast is a tough mealtime to shift cultures,” he adds. Now rice porridge is kept in hot wells, and all of the garnishes are available: pork sung (dried, shredded soy-braised pork), pickled vegetables, peanuts, cilantro and soy braised eggs (hard boiled eggs, taken out of the shell and simmered in soy sauce that’s been reduced by half).

Will American students want to try the congee?

“I think when the semester starts they definitely will,” Sweet says. “No matter what the culture, if it’s done right, people will like it.”

Another component was an expanded noodle bar, overseen by Executive Chef Chris Kaschak at UNH’s biggest dining hall, Holloway Commons. Several types of noodles, cooked protein, garnishes and broth that’s finally hot enough, thanks to induction burners, have all been a big hit.

Finally, regular rice was replaced with jasmine rice for a simple reason—you can pick it up with chopsticks.

The changes have been easy enough to implement, and the students have been very appreciative, Sweet says. He heard from the owner of Happy Market that the students are thrilled about the congee for breakfast especially.

“We really didn’t like to see a group of students who were isolated or didn’t feel like they were connected,” says Rick McDonald, director of business affairs. “It fits the mission of our university to really make an effort to include everyone.”

McDonald says he can relate to the international students’ wishes for a taste of home.

“When I was younger, I studied abroad in Austria,” he says. “Even though I’m really not a big McDonald’s fan, when I would see one, it would instantly connect me back to home.”

That connection is what the Navitas students are craving. Many students eat their meals with the company of an iPad or smart phone, Facetiming with their parents back home as they eat.

Lately, those who sometimes dine with their iPads have started to introduce moms in China to their “American moms,” staff at the dining hall. The way comfort food was meant to be.