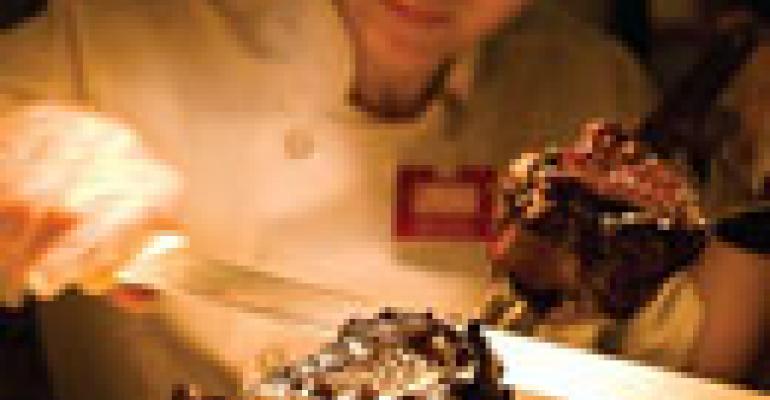 When a 26,000-student state university from the culinary byways of Southwest Virginia laps the field in the prestigious Princeton Review Best Campus Food competition, you know something is up. After all, the upper reaches of the Review's annual listing tend to be populated by small private schools with boutique foodservices, not big public institutions with “volume feeding” responsibilities.

Yet it was Virginia Polytechnic Institute and State University — better known as Virginia Tech — that came out on top of the 2007 Best Campus Food list. And that's after placing second in 2006 and ninth in 2005.

Three years in the Top 10 is no flash in the pan. Virginia Tech obviously has some major food mojo going.

The architect of the school's rise to culinary pre-eminence is longtime director Richard (Rick) Johnson, who took over in 1993 when the school's campus dining was considerably more utilitarian: traditional meat-and-potatoes board dining halls complemented by a few limited-menu snack bars.

“I came here to change it,” Johnson recalls. “We had great employees and a huge customer base — 9,000 board plan students! That was something only a handful of schools in the United States had at the time. With that board plan base, plus a good employee and management base, you could do great things. So I saw the program on the verge of something great, a diamond in the rough.”

The diamond has been polished to a fine sparkle over the intervening years, thanks in no small part, Johnson emphasizes, to a highly capable management and staff, especially the senior leadership team of Robert Coffey, Ted Faulkner and Brian Grove.

Structurally, the key move was the adoption in 1996 of a universal flex meal plan. It lets students eat at any campus dining location, either the all-you-care-to-eat dining halls or a la carte outlets, including nationally branded units, but is structured to fully fund the department's broad overhead costs (see sidebar on p. 34). It is so popular that more than 8,000 off-campus students purchased meal plans last year even though they are not required to.

It was also the flex plan that made possible what has become — at least so far — Tech Dining's signature achievement: West End Market, the pioneering dining hall marketplace concept that opened to oohs and aahs and a slew of awards — including an FM Best Concept Award — in 1999.

At West End, students can choose from a range of made-to-order dining options up to and including various cuts of steak and live Maine lobster. More traditional college food choices like burgers, wraps and pizzas (from a real wood-burning — not gas fired — oven that goes through some 50 pallets of hardwood a year) are also offered from West End's seven stations.

In addition, Tech Dining operates Personal Touch Catering, which services some 1,800 events a year campus-wide, and recently renovated its primary facility, the Owens Banquet Room. Personal Touch also handles catering for the 48 suites at the school's football stadium from an onsite kitchen.

When Johnson started, the meal plan base was impressive only because it was required for thousands of resident students. But since it was restricted to the all-you-care-to-eat dining halls, buying a meal plan was something you only did if you were required to.

Johnson credits the move to the flex meal plan in 1996 as the foundation stone of the reinvention of the program. “It set the stage for everything,” he says. “It allowed us to go a la carte. Once the flex plans were in place, we had a medium to do national brands.”

The first national brands at Virginia Tech, Chick-fil-A and Pizza Hut, debuted in the Hokie Grill food court in 1997 with spectacular success. The Chick-fil-A soon became the chain's top grossing outlet in the country, and the Pizza Hut was number one nationwide among that chain's campus units.

The success of those venues proved that flex plans in a la carte environments was not only viable but desirable. It also gave Johnson credibility with the university, credibility that his next major project proposal stretched to the limit. Simply put, he proposed to close down the most popular dining hall on campus and replace it with a concept completely untried in a college environment — or almost anywhere else, for that matter.

This was the marketplace café inspired by Richard Melman's Foodlife concept. Foodlife had debuted in downtown Chicago's Water Tower Place in 1993, offering self-contained display cooking stations serving upscale, to-order dishes. Johnson had seen it when he was in Chicago for the NRA Show in 1995 and was bowled over.

“I fell in love with it,” he admits. “I thought, ‘This is the neatest cafeteria I've ever seen in my life, and there's absolutely no reason we couldn't do it on our campus.’ After we put the flex meal plan in place we had a medium. You couldn't serve lobster with an all-you-care-to-eat plan, but now we were playing in the a la carte arena, and I knew we could.”

That Johnson chose to eliminate Cochrane Dining Hall to make way for his experiment seemed gratuitously truculent, though. Why not replace a less popular venue instead? (Cochrane's popularity rested on a reputation for having the best food on campus and for its “intimate” atmosphere, which was simply a function of its being smaller than the other venues.)

But the reasoning was sound. As the smallest dining hall, Cochrane would leave a smaller void while it was closed for the several years that it would take to design and build West End Market.

West End finally opened in January 1999, three and a half years after Johnson's Chicago epiphany, but it was well worth the wait. Some 3,000 students showed up the first day and the crowds never let up.

Those crowds drove the next major project: a complete renovation of another all-you-care-to-eat venue, Dietrick Dining Hall. “We renovated Dietrick basically to take pressure off West End,” Johnson recalls, “but its opening coincided with the addition of 2,000 more off campus meal plans, so that lessened the impact.”

The reinvented Dietrick debuted in the fall of 2004 as D2. It offers an all-you-care-to-eat alternative to West End that emphasizes internationally themed food stations, most prominently a Brazilian churrascaria grill, but also vegetarian/vegan, Asian, Mexican, Italian and New York deli options capped by a European dessert spread.

West End and D2 are kind of the a la carte and all-you-care-to-eat poles of the Virginia Tech dining world. There is one other all-you-care-to-eat facility currently, though that will eventually close (see below). The rest of the dining options are various iterations of a la carte venues, giving students maximum flex in their meal plans.

You Have to Spend Money to Make Money

The D2 ($6.5 million), West End ($5 million) and Owens Banquet Room ($1.4 million) projects convincingly demonstrate that the right investment can prime the revenue pump, and that Johnson is not afraid of making those kinds of investments — and very good at selling them to administrators. This ability is especially valuable in large public institutions, where major spending proposals can be hard to keep on the priority list.

Johnson credits his success to a “capacity for perseverance.”

“In a state system you just have to be able to persevere,” he says. “No matter how great your ideas are, how good your plans are, or how self-evident what you're trying to do is, there's a system you have to work through.”

Next up, a major new dining operation, scheduled to open in 2011 as part of a new administrative center. Foodservice will have three of the five floors of the new building, some 35,000 sq.ft. altogether, with as much as a thousand seats inside and outside. The rest of the building will house academic offices.

“This will provide a major dining facility on the academic side of campus,” Johnson says, noting that there currently are no easily reachable department-run dining options in this section of campus. So a heretofore almost untapped population of some 4,000 university staffers soon could become regular customers.

The new facility will also be located next to the major commuter parking area. Johnson expects a bump up in off-campus meal plan purchases once it opens, expanding an already impressive voluntary meal plan purchase total (half of non-residents already purchase plans).

While the specific concepts have yet to be finalized, Johnson says the new dining venue will have 10 separate serving stations offering a mix of nationally branded and in-house concepts. He projects the customer mix to be about 65 percent students and 35 percent staff.

The new facility will replace one of the current all-you-care-to-eat dining halls (Shultz), leaving its thousand-some daily transactions to filter to the other venues. Shultz is in a lightly populated corner of the campus anyway. Its building will become part of a new performing arts center that will itself represent more catering opportunities.

With the new venue, and a modest expansion of West End scheduled for 2010, it sounds like Tech Dining may not be finished with either the awards or the accolades.

5 tech things: Robots and drones debut at sporting events
May 11, 2022