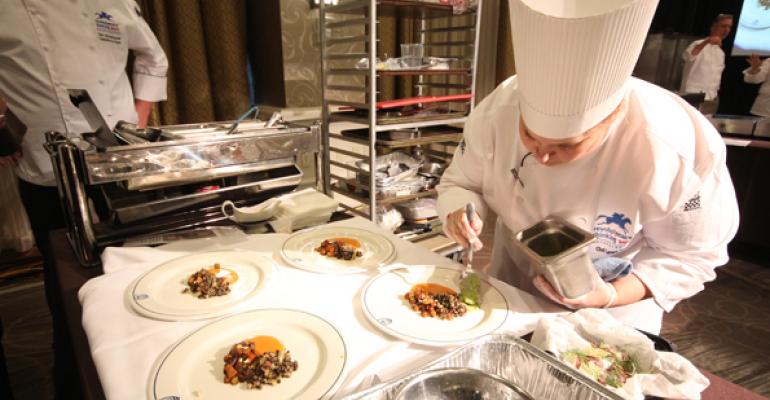 Top College Chefs Compete Against the Clock, Other Regions

Behind the scenes at the annual NACUFS Culinary Challenge

This being Boston, the featured ingredient (always based on the conference location) was fresh from the sea: flounder. And an engaged campus dining crowd got to see six highly creative, complex—and delicious—interpretations by six NACUFS regional chefs. They brought their equipment, game faces and fans to the challenge, held on Thursday, July 12, during the conference.

Four ACF-credentialed judges critically evaluated each chef on creativity, presentation, taste of the finished product, demonstration of cooking and knife skills, nutritional balance, organizational skills and sanitation practices. (You can view an animated slide show of the competition here)

And the winner was…(we’ll get to that in a minute).

“It’s amazing when you look at the recipes as prepared by the six chefs, at how many different ways there are to prepare that fish,” says Jonna Anne, director of culinary operations and executive chef at SUNY Geneseo, who chaired the event. “Now, consider all the other recipes and presentations already eliminated in regional competitions earlier this year. You are really seeing the cream of the crop.”

“The judges all wanted more of the oyster,” Anne says. “Not because the dish needed it, but because it was so good!”

For Strunk, preparation was the key.

“When I compete, I like to practice the entire execution at least ten times, so by the time I get up there in front of 280 people, it is just routine,” she says. “If I got nervous, I might forget the next step. I didn’t want any question in my mind as to what I needed do next. You’ve got to set yourself up to succeed.”

The judges remarked on how the vanilla in Strunk’s creation gave it a nice sweetness that balanced incredibly well with the other flavors in the dish, Anne says. “All of the flavors came together and really blended to give a full layering effect in your mouth. None of the flavors overpowered any others—they just played together really, really well.”

There was an element of molecular gastronomy in Strunk’s dish as well. The citrus pearls were created with a process that incorporated frozen canola oil, gelatin, grapefruit juice and dry ice. The result: little pearls that perched on top of the crispy oyster.

“When the judges bit into it, the pearl popped, releasing a burst of grapefruit flavor, but it never got the oysters soggy,” Strunk explains. She went to a class at NACUFS about molecular gastronomy and is interested to learn more about the techniques.

“I’m not quite sure how it will fit in here in Indiana, but it’s interesting, and maybe in a couple of years, and I’d like to try some of the things for higher-end catered events for sure,” she says, adding that the showy cocktail tricks she learned at NACUFS (a freeze-dried Bloody Mary) will be sure to make her the hit of parties at home.

Another competitor also turned to molecular gastronomy for inspiration. Nery Trigueros of Cornell University prepared his Flounder Two Ways using a “sous vide style” of cooking. It wasn’t true sous vide, because that would have required another heat source, and each chef is only allowed to use an induction burner, Anne says. At the same time, that constraint helps keep the competition interesting, she adds.

Other elements that intensify competition include the need to work at a demonstration table rather than a kitchen and the requirement that three classical cuts (such as julienne or tourne) be used to demonstrate knife skills.

But the biggest challenge could be the fact that each chef has only 60 minutes to create four dishes—the main course and three sides.

“The atmosphere is always tense, with a lot of excitement,” Anne says. “The chefs want to give it their all. They are bursting with energy, but it’s a positive energy. They were all supporting each other. If someone needed something, the others would give it to them.”

Other competitors included Mary Y. Ferrer of the University of California-Berkeley, with “Duo of Flounder,” pistachio-crusted flounder with potato and fennel hash with fresh tomato and blood orange sauce; flounder paupiette with blood orange buerre blanc on a bed of julienned vegetables; and Cesar Tovar of Rice University with pan seared flounder with sherry tomato ragout with lemon beurre blanc.

Manfred Werner Edler of Villanova University, representing the Mid-Atlantic Region with Flounder fillet topped with flounder mousseline (a forced-meat component which involves pureed flounder with cream that is poached) and butternut squash crust. Elder took home an ACF Gold Medal—he had enough points to qualify for a gold, so in the competition, there were two gold medals and one silver awarded to Phillip Edwards, culinary manager of Concordia College, Moorhead, MN, a surprise competitor.

Overall, Strunk says attending NACUFS is just a great way to get new ideas, meet new people and “sharpen your thinking, something that can be hard to do during the day-to-day rush of foodservice.”