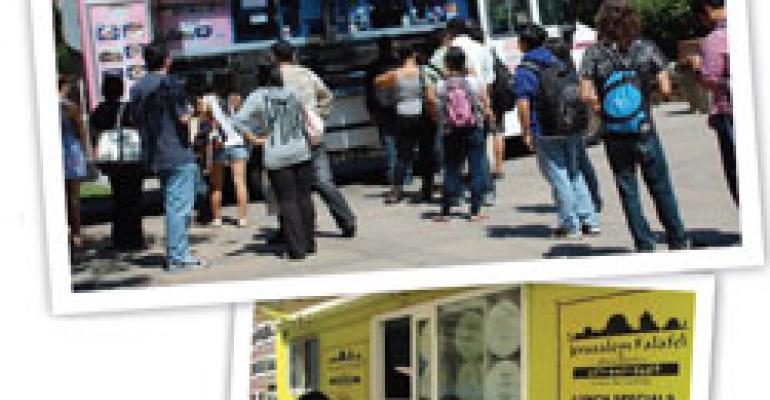 Some colleges are using those dreaded food trucks as an added component to the campus dining mix.

When UCLA closed down its venerable Bombshelter food court last December, the Associated Students of UCLA (ASUCLA), which manages onsite dining at the school, had to make a decision on how to provide dining to students on that part of campus. Their solution: invite independent food truck operators onto the grounds to become, in effect, licensed campus food stations having the blessing of the dining department.

So far the gambit has paid off as students have taken to the array of food served by more than 30 trucks that rotate through the space on the South Campus near the under-construction Court of Sciences Student Center where the Bombshelter was located. There is one each weekday morning to serve breakfast and two others for the lunchtime crowd. Each is inspected and certified by ASUCLA before being allowed on campus.

UCLA is hardly unique as a number of universities have either made peace with the trucks that hover around campus by legitimating them in some way, or they have decided to enter the food truck business themselves.

One of the oldest such programs is at the Massachusetts Institute of Technology (MIT), which has been accommodating outside vendor food trucks for over a decade. Currently, four operate on campus: Goosebeary's, which has been serving its Asian favorites at MIT since the 1990s; Jerusalem Café and its Middle Eastern menu; Jose's Mexican; and the newest entry, Clover, which specializes in sustainable and organic dishes made with local ingredients.

“We have a large graduate student community who live on stipends and want inexpensive but diverse meal choices,” says Richard Berlin, director of MIT Campus Dining. “The trucks add a layer of complexity and interest to what we offer in terms of a menu mix,” Berlin notes that his department approves menus and prices and ensures that the trucks meet sanitary codes before being allowed to operate on campus.

The trucks only take cash and park in the same spot every day. They generally operate weekdays for lunch though they have permission to be on campus between 10 am and 3 am.

Some schools are looking at managing their own trucks. At California Polytechnic State University at San Luis Obispo, a truck named the Curbside Grill has been operating for about a year, serving a menu based around tacos and similar street foods.

The idea of a mobile foodservice was prompted by the changing traffic patterns on campus dictated by new construction of roads and buildings, says Marketing Manager Yukie Nishinaga. “We were also watching the trends, which showed how taco trucks were becoming ever more popular, especially with our target audience of college age young adults,” she says. “We also wanted something mobile that can move around campus to take advantage of customer traffic.”

Curbside Grill also serves as a mobile catering platform and an additional concession outlet during sports events. The menu is unique with specialties like Korean tacos and burritos, sweet potato fries and fish tacos.

The department uses social networking platforms like Facebook and Twitter to communicate with students, who can download text coupons that encourage sales. The department also is working with the school's art design classes to develop advertising for the truck.

The trend is catching on. At the University of the Pacific, Sia Mohsenzadegan, the general manager for campus dining services provider Bon Appetit Management Co., plans to roll out the department's own truck later this fall in the school's south campus area, where dining outlets currently don't exist. Mohsenzadegan says the reason he decided on a truck solution rather than a more traditional kiosk was “fresh food. The food can be prepared on the truck and served to customers immediately, rather than the alternative, which was to make it in a commissary and then transport it over.”

Pacific's yet-to-be-named truck (there is a student contest underway to determine its logo and outward design) will include various pieces of production equipment, including a grill, and will be manned by a four-person staff. The menu will be unique on the campus, with daily specials and seasonal changes. It will serve breakfast and lunch during the week. Mohsenzadegan says he is projecting about 250 transactions a day.