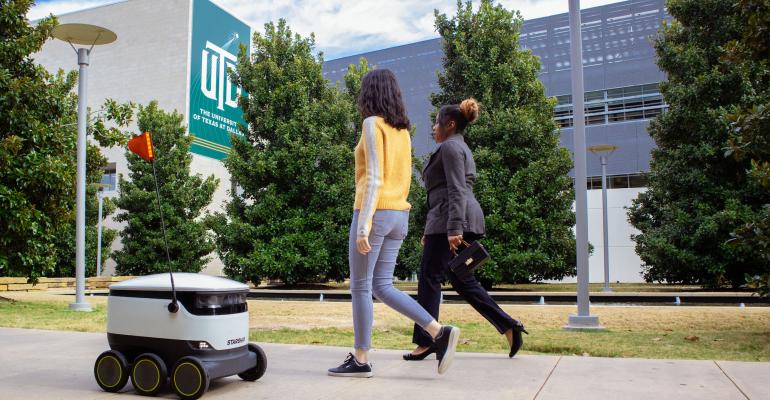 Chartwells Higher Education and Starship Technologies have partnered to bring robotic delivery services from campus restaurants like Papa John’s, Panda Express, SMASH’D, Firehouse Subs, The Halal Shack and Einstein Bros. Bagels to students and staff across the campus of the University of Texas at Dallas (UTD). The program, launched on Dec. 3, involves 30 robotic units that carry food all over campus from 10 different campus dining outlets.

Customers place orders through the Starship Deliveries mobile app—there is no minimum—then select a drop-off location by dropping a pin on the campus map and pay by credit or debit card (more payment methods are expected to be introduced in the new year). Drop-offs can only take place out of doors as the robots cannot enter buildings. 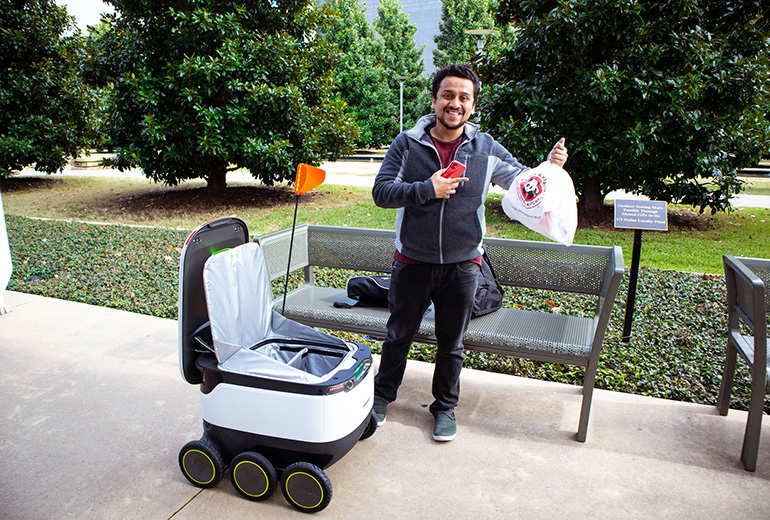 The robots currently are a minor sensation on the UDT campus but are on their way to becoming a routine sight, which is fine with Chartwells and Starship Technologies.

The app also lets the customer see the robot’s journey in real time through an interactive map and transmits an alert when it arrives. The food is locked inside the robot and can only be accessed by the customer through the app.

“Though it obviously varies, [in general] we do hundreds of deliveries a day,” says Henry Harris-Burland, vice president of marketing for Starship Technologies. He expects that to grow in the new year as most of the time the service was available in December was during the pre-holiday exam period when not all students were on campus consistently.

Nevertheless, the robot delivery service coincided with a 3.5% to 4% bump in sales at the units where it was an option, and led to about a dozen more student jobs, observes Charlie Dorsa, resident district manager for Chartwells at UTD.

“I would say that at that point [when the robot delivery service debuted], about 20% of the campus was gone and the next week about 40% was gone because of the Christmas break, so when we relaunch in January, all of campus will be here and we expect that [sales increase] to almost double,” Dorsa says.

Harris-Burland suggests that he expects double-digit increases, which has been the norm at other campuses where the robots were introduced. He also notes that even in the early going the robots have generated buzz and become kind of campus celebrities.

“Kids are drawing pictures and posting all over social media [about them],” he says. “It’s amazing to see what they come up with. They’ve even designed T-shirts, hoodies, jumpers and sweaters” featuring the robots. 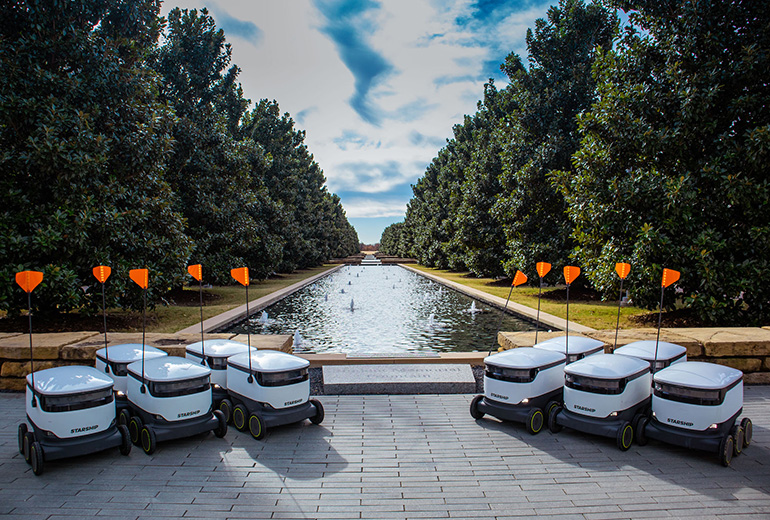 UTD Dining has 30 of the robot units available to make deliveries from 10 different campus restaurants, and perhaps even more in the near future.

Of course, the novelty will soon wear off, and that’s not just OK but desirable, Harris-Burland explains. “When we first launch it [on a campus], there’s [always] a massive buzz around it and lots of students are using it for the first time to see if it’s any good and how it works, but the real value comes when we see students ordering for the fifth time and the 10th time and even the 50th time. That’s when it stops being a novelty and becomes a real benefit and a real value.”

The robots carry only a single order at a time even though they are capable of handling as much as 20 pounds at a time, because the whole point of the robots is to provide quick, convenient service.

“When you start bundling orders, you start messing with the ETAs for the customers,” Harris-Burland explains. “Part of what we do here is [provide] really accurate, really convenient service for students, faculty and staff, and in order to do that, one delivery at a time is the best way.”

Currently, most deliveries are completed within 15 to 30 minutes, though there is no guarantee.

“For lunch, Panda Express is super popular because, well, Panda’s popular [generally] but also because we can execute [orders from] it relatively quickly. The same for Halal Shack and we also have a concept called The Pub that has done much better with the deliveries than we anticipated.”

The campus Papa John’s is open until 1 a.m., the latest of any of the UTD restaurants, but there’s no reason the robots couldn’t deliver later into the night if a venue to produce orders remained open that long, Harris-Burland adds, noting that at other colleges where Starship robots operate, service can sometimes extend to as late as 3 a.m.

Delivery requests fluctuate over the day, peaking in the morning, noon and evening with relative lulls in between, but one thing Harris-Burland says he’s noticed at both UTD and other schools is the impact on breakfast sales.

“We’ve found that when students can get their breakfasts delivered to them, they actually increase their consumption of breakfast,” he observes.

Security isn’t really an issue. The robots are equipped with cameras to identify anyone trying to interfere with them, as well as a siren that goes off if any attempt is made to break into it without the proper access code.

As for students who only want to obstruct a robot just to see what it would do without meaning any particular harm, “we’ve found that the robots have a lot more patience than the students,” Harris-Burland laughs.