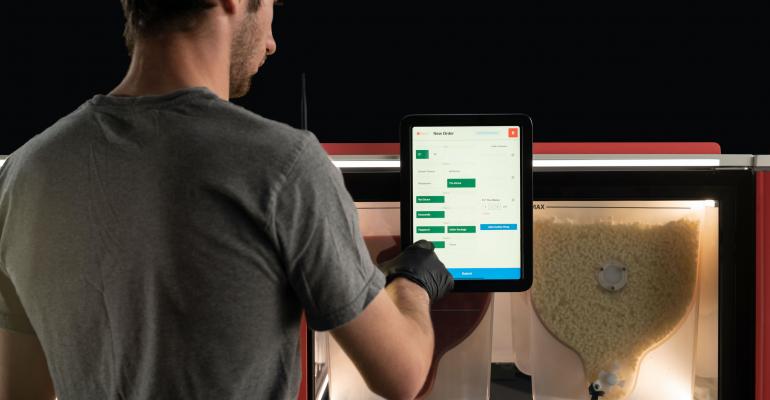 This and Bon Appetit’s updated sustainability tracking tool are some of the tech-related developments you may have missed recently.

Chartwells Higher Education in partnership with food automation company Picnic are bringing what they say is the world’s first pizza assembly station to a college campus dining facility at Texas A&M. The Picnic Pizza Station—autonomous and completely customizable for each order—loads the dough, then applies the sauce, cheese, fresh-cut pepperoni and additional toppings and loads it into the kitchen’s ovens for cooking. The station can assemble up to 100 pizzas an hour while saving labor, increasing productivity, reducing food waste and improving food handling and safety.

"We've seen a significant increase in efficiency with the Picnic Pizza Station," says Marc Cruz, Chartwells Higher Education’s district executive chef. "What used to take three people now only requires one which allows us to free people up to do other critical duties in the kitchen."

Bon Appétit Management Co. has announced the launch of the second generation of its proprietary Food Standards Dashboard, a sustainability and wellness data tracking and reporting tool developed in house that is designed to give chefs and general managers easy-to-understand, actionable data that helps them make their operations and menus more sustainable for the planet and healthier for guests. Pulling data from multiple purchasing, finance, and menu management systems, the Dashboard tracks each operation’s progress in alignment with the company’s standards for local purchasing, amount of plant-and animal-based foods on menus, compliance of seafood purchases with Seafood Watch criteria and alignment with its Low Carbon Lifestyle program to decrease deforestation, trim transportation and reduce waste.

New York based automated dumpling restaurant Brooklyn Dumpling Shop is opening its first Connecticut location Feb. 15 near the University of Connecticut campus. Its fully automated experience lets guests order ahead online or on site at an electronic kiosk, then receive a text notification to pick the completed order up from a marked, temperature-controlled locker that opens automatically once the customer scans a provided barcode.

Los Angeles-based remotely piloted delivery service Coco has invaded Texas, officially hitting the streets of Austin with plans targeting Dallas and Houston, followed by penetration of the Florida market in Miami slated for the next few months. Coco launched in Austin with 10 restaurant partners, including several pizzerias as well as other types of cuisine concepts such as Tuk Tuk Thai. "Tuk Tuk Thai Cafe is super excited to be part of the first launch of Coco robot delivery in Austin," said co-owner Nam Noieam. "We believe this innovation will provide a faster and more reliable delivery service to our customers."

As part of its Taste the Future recruitment campaign, furniture retailer IKEA is inviting candidates for job interviews where they are invited to try some experimental plant-based meatballs prepared with a 3D printer. “IKEA is at the start of a journey to embrace data and technology to become more affordable, accessible and sustainable in an omnichannel environment," explains Inter IKEA Group CIO Pascal Pauwels. "Naturally people with imagination will play a big role in that quest. So here we’re looking for people who want to create a better everyday life with us. This campaign is a great way to start the conversation.”