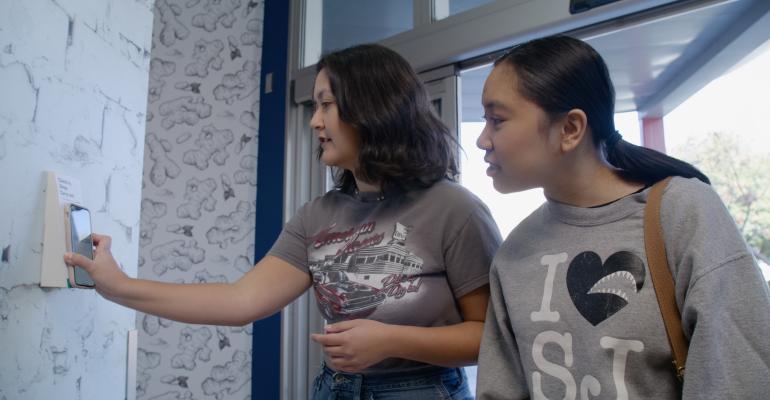 Chartwells Higher Ed
The autonomous Ginger Market retail store at San Jose State University was opened recently by Chartwells as part of a planned expansion of the technology to other campuses.
News & Trends>Colleges & Universities

This and the first Amazon Just Walk Out store set to open in an NFL stadium are some of the tech-related developments you may have missed recently.

Autonomous retail company Standard AI is expanding its partnership with contract food service management firm Chartwells Higher Education to bring 100 autonomous retail stores to several U.S. universities after two years of collaboration. The two firms teamed in 2020 when Chartwells retrofitted an existing retail space at the University of Houston using Standard AI’s autonomous platform to enable students to walk in, select their items and walk out. Chartwells and Standard AI recently collaborated on six new and revamped markets, with the store at The University of Texas at Dallas opening soon, while the first fully-autonomous store in Silicon Valley was opened last year at San Jose State University’s Ginger Market.

The NFL's Seattle Seahawks and Lumen Field announced plans to modernize the stadium's concessions experience with a new store powered by Amazon's Just Walk Out technology for checkout-free shopping, and Amazon One for entry and payment with palm recognition, thanks to a collaboration with Lumen Field hospitality partner Levy and Levy’s DBK Studio innovation studio. Lumen Field will become the first NFL stadium to implement both technologies in a single store, with the venue scheduled to open in time for the 2022 Seahawks regular season.

Read more: Seattle Seahawks and Lumen Field to Become First NFL Venue to Open a Food and Beverage Store Powered by Amazon's Just Walk Out Technology and Amazon One

The U.S. robotics industry is booming, partly thanks to the nation’s record labor shortage. For the third consecutive quarter, U.S. robotics sales numbers have hit a record high, according to figures from the Association for Advancing Automation (A3) trade group. Businesses like restaurants and food delivery operators have turned to robotics in droves since the pandemic began, which may have accelerated a trend that was seeing businesses already move toward automation. Last year, one-third of firms were already “implementing or exploring automation to replace workers,” a survey of chief financial officers by Duke University found.

Applebees, Chipotle and Red Lobster are among a number of restaurant chains accused of violating biometric privacy law by allegedly using automated voice ordering technology that captures consumers’ voiceprints without their consent. A group of customers are claiming that the restaurants are in violation of the Illinois Biometric Information Privacy Act (BIPA) by allegedly collecting and storing their biometric identifiers without obtaining prior informed written consent. The customers argue the restaurants—which also include Blaze Pizza, Noodles & Co., and Portillo’s—and the companies behind the automated voice ordering systems failed to disclose they were collecting biometric data or to provide data retention and destruction policies.

Green Spring Farm in Stockton, Calif., where pesky birds used to damage more than 8% of the production, is now seeing that damage reduced by more than 70% thanks to the laser bird deterrent AVIX Autonomic Mark II from vendor Cypress AgriTech. The high-tech scarecrow can be programmed via a user-friendly app to shine a laser beam across predetermined paths, and since birds perceive green laser frequencies as solid object, they flee immediately when the beam moves toward them without getting harmed.