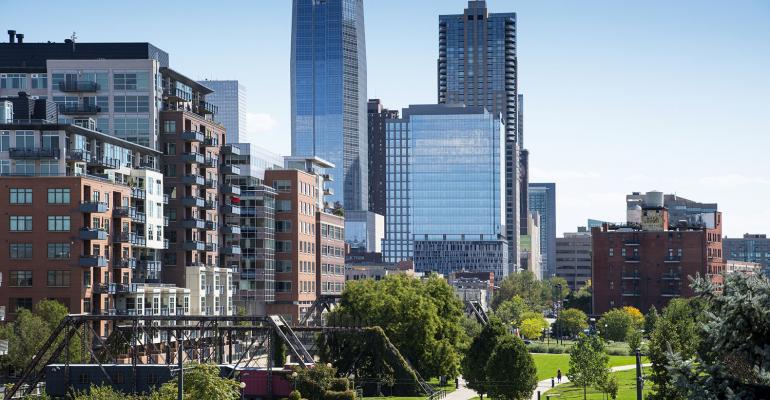 John Coletti / The Image Bank
Two new Eat Now Corner Stores autonomous grocery stores at the University of Denver (UD) allow students to scan the QR code on their app, grab what they want and walk out.
News & Trends>Colleges & Universities

This and two Texas Chick-fil-A units deploying energy-efficient delivery robots are some of the tech-related developments you may have missed recently.

Two new Eat Now Corner Stores autonomous grocery stores at the University of Denver (UD) allow students to scan the QR code on their app, grab what they want and walk out. The first checkout-less markets on college campuses in Colorado and some of the first in the country, the outlets—run by UD's campus dining partner Sodexo—use both cameras and sensors to track shoppers as they move throughout the store but don’t need sensors or scales on the shelf because cameras are pointed from multiple angles at the jars of pickles, fresh produce and Starbucks coffee machines. The stores, which replaced two traditional c-stores at other locations on campus and occupy former small dining hall spaces, have seen sales increase 30% in the first three months of the year from what was generated by the stores they replaced.

Read more: Grocery stores where you don’t have to check out? The University of Denver just got them

Last-mile autonomous robot delivery company Refraction AI has deployed a fleet of its self-driving vehicles to provide meal deliveries at two Chick-fil-A restaurants in downtown Austin, Texas with what it says is 90% lower carbon emissions, 80% less energy consumption and a fraction of the cost of conventional delivery. "Autonomous delivery using Refraction's robots creates an exciting new opportunity to extend the Chick-fil-A experience to a growing number of delivery guests," said Luke Steigmeyer, operator of one of the Chick-fil-A units involved in the pilot program. "The platform will allow us to provide fast, high quality, and cost-effective meal delivery within a mile radius of our restaurant all while helping to keep the community we serve environmentally clean and safe."

Technology demonstrated by in-location experience management platform Raydiant at the recent National Restaurant Association Show in Chicago uses cameras that can detect the gender, age, attention level and mood of incoming customers and uses artificial intelligence to match each person with menu items they might find most appealing during that time. A recent report incorrectly stated that the Wahlburgers casual dining chain was using the product, but the only connection Wahlburgers currently has with Raydiant is the use of its technology in digital menu boards, which currently have no artificial intelligence or facial analysis component.

Read more: Mark Wahlberg Is Using AI To Decide What You Eat

Drone maker Flytrex recently announced that its customers in Holly Springs in North Carolina will now be able to get deliveries of Ben & Jerry’s, Good Humor and other ice cream brands made by Unilever. This comes a few weeks after a Jersey Mike’s Subs shop joined the restaurants and retailers in the community's Holly Springs Towne Center that now deliver products by air. Israeli firm Flytrex and North Carolina-based Causey Aviation began making drone deliveries in Holly Springs last fall with chicken wings from It’s Just Wings to a single nearby subdivision but now they’ll deliver a mile in any direction from Holly Springs Towne Center with offerings that have grown to include Starbucks, Taco Bell, Papa John’s and Target.

After testing the Bartesian Professional automated cocktail program in Cincinnati’s Paul Brown Stadium during the 2021 NFL season, Aramark is expanding its use to five Major League Baseball accounts this season, while Delaware North, which tested the Bartesian Professional unit in suites during the 2019 MLB season and has steadily grown the partnership, is rolling out programs across all of its MLB, NFL & NBA venues in 2022. "Consumer demand for cocktails is at an all time high, yet venues have been challenged by the labor, ingredients and the time required to deliver consistent, premium cocktails," said Bartesian Founder/CEO Ryan Close. "With our commercial unit, we're able to offer the hospitality and entertainment industry a solution that exceeds their high standards."