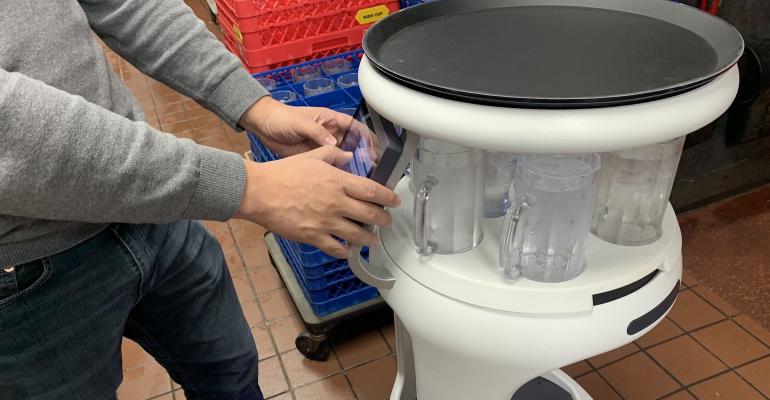 This and a video feed designed to reduce a college’s dining hall lines are some of the tech-related developments you may have missed recently.

Chili’s Grill & Bar is expanding its test of the hosting, toting and singing Rita the Robot to 51 more restaurants after a test in 10 restaurants since October 2020 helped the brand determine which roles the robot does best, the company announced. Rita performs tasks such as leading customers to tables, running food, clearing tables  and even singing Happy Birthday with a 99% success rate, says Wade Allen, Brinker's senior vice president of innovation. "Each restaurant is different though, and they utilize her in the ways that are most helpful to them," he said. "She’s most used right now for food running and hosting duties."

In an effort to curb its notoriously long lines, the Campus Center Dining Hall at Ithaca College in New York now has a camera perched by the front exit that provides a constant video feed of the inside of the Campus Center, allowing students to see how crowded the dining hall is at any given time by logging in with their Netpass credentials through the Ithaca College website. “This is a pilot to see if putting a camera in there helps influence people’s behaviors,” says David Prunty, executive director of Auxiliary Services. “You can tell people over and over again that during certain times of the day there’s gonna be a lot of lines down there, but maybe it would help to actually show [that].”

The Chipotle fast-casual restaurant chain has announced a $50 million venture fund that will target tech start-ups in the early "seed to Series B" stages of their life cycles, and could touch every piece of the burrito pipeline, from agriculture to ingredient tracing and tracking to point-of-sale systems. The company has been a leader in the deployment of technology solutions to the foodservice industry, from testing a tortilla chip-producing AI-driven kitchen assistant and investing in delivery robot start-up Nuro to beefing up its app and online order capabilities that now routinely accounts for roughly half of all sales, and opening its first takeout-only digital ghost kitchen.

The Ohio State University said new food delivery robots will be returning to campus in the next few weeks after teams from GrubHub and the university’s dining services set up and test the new units, though not all areas of campus will be included in the delivery zone during the test phase at the end of the semester. Food delivery robots were pulled from Ohio State's campus in March when GrubHub ended its partnership with Russian tech company Yandex.

A Japanese start-up called Pecofree has developed a boxed lunch ordering system targeted specifically for primary/secondary school students that allows them to order and pay for a lunch from an online menu via smartphone by 9 a.m., which is then prepared by a local lunchbox vendor and delivered to their schools. The system was developed and launched by Tatsuo Kawanami, who had previously been involved in school cafeteria operations with a local foodservice company and saw first-hand how difficult it was to estimate the amount of food needed at school cafeterias and how profits could be squeezed due to food waste. The business model is structured so that the company concludes contracts with individual schools, which do not bear any of the operating costs, and receives a commission from the lunchbox vendors.