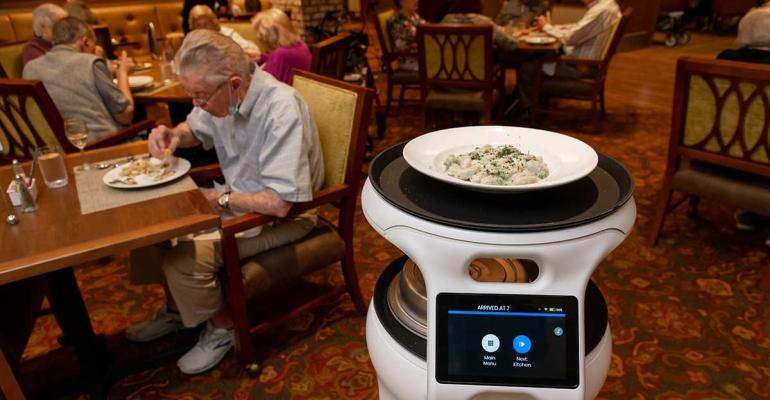 Max Franz for Culinary Services Group
A service robot delivers food to a table at The Homestead, a dining venue at Springwell Senior Living Community in Baltimore.
News & Trends>Colleges & Universities

This and a major grocer discontinuing a self-checkout app due to losses are some of the tech-related developments you may have missed recently.

A new report from software reviews and selection platform Capterra has found that more than half of restaurant leaders say front-of-house restaurant workers like hosts, baristas and drive-through operators can easily be automated with today’s technology, while roles like chefs and cooks are the least-automatable jobs, followed by managers, waitstaff and bartenders. It also found that over three quarters (76%) are currently using automation in three or more areas of operation, and nearly all (96%) use automation tools in their back-of-house operations, including day-to-day kitchen functions like inventory management, food prep, food safety monitoring, and order capacity, as well as administrative areas like employee management and performance analytics. Front-of-house automation tools also provide value through mobile ordering apps, digital loyalty programs, and online reservation software. In addition, over three-quarters of the leaders say their employees find it easy to use their restaurant’s automation tools and over half say revenue has increased since implementing the tools.

Citing losses, the supermarket chain Wegmans has announced that it had halted the use of its self-checkout SCAN app in which customers scanned their groceries as they shopped. The company did not specify the amount of losses or indicate whether they were from thefts or from customers who forgot to scan certain items, but it said in a statement that it was discontinuing the app’s use until it could make improvements “that will meet the needs of our customers and business.” The app allowed customers to scan each grocery item they picked up as they moved through a store, then pay by scanning a bar code at the self-checkout register.

At the beginning of the current academic year, Mott Community College in Michigan became the fourth college campus in the country to install a 24/7 fully-automated artisan pizza vending machine from PizzaForno. The machine is loaded with up to 70 pizzas, including favorite options like Meat Lovers, Cheeseburger, Pepperoni, BBQ Chicken, Hawaiian, Four Cheese Blend, Vegetarian and Honey ChèvrePizzas, all for $9 plus tax, and customers can also order and reserve their pizzas in advance through the PizzaForno app.

Some fans attending the recent NFL game between the Chicago Bears and Green Bay Packers at the latter's Lambeau Field home stadium experienced duplicate charges on their credit or debit cards after paying for food and drink through the FreedomPay payment processing system. The Packers subsequently released a statement informing fans that the duplicate charges are due to a worldwide FreedomPay issue and that the pending duplicate charges will not be completed.

Not sure about rain, snow, sleet or gloom of night, but apparently police tape isn't enough to keep food delivery robots from their appointed rounds as video shot by a bystander shows a Serve Robotics food delivery robot crashing the scene of a suspected shooting at Hollywood High School in Los Angeles (the shooting was later found to be a hoax). In response to the strange occurrence, Serve Robotics said that "Serve's standard operating procedure is to reroute and not cross barrier tapes; however in this instance the robot supervisor believed they were being waved through. We're taking steps to ensure our operating procedures are followed in future.”