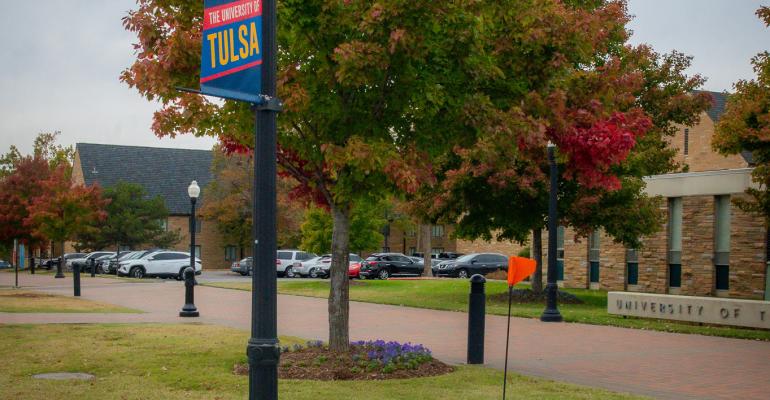 This and researchers developing bacteria-eating viruses as a safe food decontaminant are some of the tech-related developments you may have missed recently.

In partnership with Starship Technologies, the University of Tulsa (TU) is the latest university, and the first in Oklahoma, to roll out robotic food delivery units, starting with 15 robots, but with space available for up to 40. The service is currently restricted to campus eateries but as the robots have a potential range of up to two miles, TU officials hope to take advantage of that. “We are looking at a phase two where we’d be looping in neighboring eateries, so our students could order from them and have their order delivered via robot to campus,” said TU Vice President Matt Warren.

Related: 5 things: University of Michigan commits to 55% plant-based by 2025

Researchers at McMaster University in Canada have developed a way to coax bacteriophages—harmless viruses that eat bacteria—into linking together and forming microscopic beads that can safely be applied to food and other materials to rid them of harmful pathogens such as E. coli 0157. Each bead is about 20 microns, (one 50th of a millimeter) in diameter and is loaded with millions of phages. The researchers say the same approach can readily be used against other bacteria which cause food poisoning, such as Salmonella and Listeria—individually or in combination and that phage sprays could be used in food processing, packaging and cleaning, and even as a treatment for irrigation water and equipment, stopping contamination at the source.

The University of Houston (UH) is expanding its robot population on campus with the addition of new robot servers at the UH Conrad N. Hilton College of Global Hospitality Leadership restaurant. In an effort to stand out from other schools, the college dean, Dennis Reynolds, debuted Servi, the new service robot, to Eric's Restaurant in the Hilton hotel to introduce a factor that he says could alter the industry and give an opportunity for students to observe. According to the Hilton College, UH is not just the only college in the country to use Servi, but it's also the only restaurant in Houston to employ a robot server, with the goal of research and development in the food service industry.

The Compton Public School District in California has replaced its aging water pipes with a new system that literally makes water out of thin air, and students are using it to irrigate their campus garden, part of the “Farm of the Future” program set up by a Santa Monica based company named Skywell. Skywell partnered with the Compton Public School System to teach students about science and sustainable solutions to California’s drought by irrigating the entire garden using a unique system that extracts water from the air and funnels it through a special tank.

Kansas City grocery store Community Groceries has collaborated with Amazon to equip Just Walk Out technology and Amazon One in one of its stores for the first time when it re-opens with the new retail technology on Dec. 16. It’s also the first time Amazon has expanded both technologies to a third-party customer’s grocery store in the US.