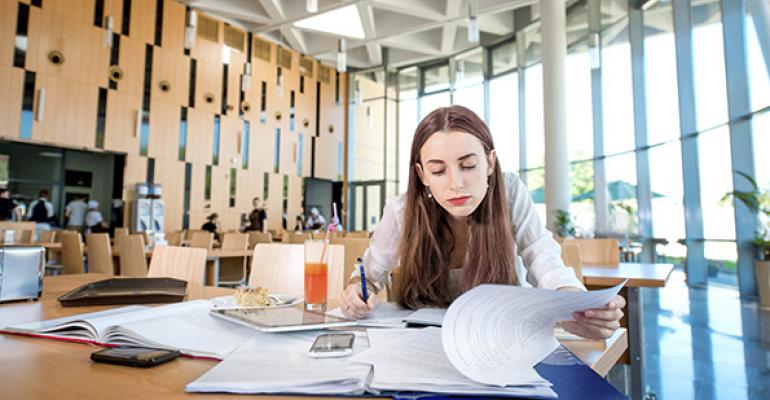 This and more are the things you missed for the week of Nov. 2.

1.    Ranking the colleges with the best dining halls
Business Insider has released its list of the 20 colleges with the best dining halls, and some familiar faces are at the top—Bowdoin College, the University of Massachusetts and James Madison are the top three. To come up with its list, Business Insider looked at rankings from The Daily Meal, The Princeton Review and Niche to compile its list.

Read more: The 20 colleges with the best dining halls

2.    District, USDA reach agreement on school meal processing
Londonderry school district in New Hampshire and the USDA have reached an agreement that allows the district to continue its meal service. The high school opted out of the National School Lunch Program, but it was being used to produce meals for schools that were still on the program. The USDA had initially reported that the high school would be classified as a processing facility, putting it under new regulations. That was reversed this week as USDA officials met with the district and came to an agreement that would allow the process to continue, with safeguards against any of the federally subsidized food received from the NSLP not going into the high school.

Last week a group of well-known chefs, including Tom Colicchio, lobbied Congress urging its members to reauthorize the Child Nutrition Bill without any changes to the legislation. The chefs were part of a group called Chef Action Network, a nonprofit that teaches chefs how to advocate for changes in the food system. The idea is that chefs are helping to make changes to the way we eat and source food—think local, sustainable, healthy—and that because of that they are perfectly positioned to help educate lawmakers on needed changes to food policy laws.

Colicchio’s advice to those advocating last week was to be passionate about the message of taking care of children, adding, “We’re the adults. The idea that kids don’t like this—well, what kid actually did like school lunch,” according to an article on NPR. I’m pretty sure that’s not the message school nutrition professionals are hoping makes the rounds in the halls of Congress.

4. McDonald’s school ambassador drawing fire from parents/nutritionists
John Cisna, a science teacher in Iowa, watched the “Super Size Me” documentary and decided to do his own experiment. In it he ate only McDonald’s for six months, limiting his caloric intake to 2,000 calories a day and exercising regularly. Cisna, who weighed 280 pounds at the start of the experiment, lost 56 pounds and lowered his cholesterol about a third. His message: “"I'm not endorsing fast foods,'' Cisna told NBC's Today show Tuesday. "I'm endorsing that kids need to start using critical thinking skills when it comes to making the right choices of what they eat."

Cisna has visited more than 90 colleges and high schools telling his story. And it’s not going over well with many.

"Our schools should not be places where corporations market their brands to children, and particularly not McDonald's, given its role in driving an epidemic of obesity," corporate accountability organizer Sriram Madhusoodanan told CBS News. "At the end of the day, this is one big infomercial for McDonald's masquerading as education."

With all the fighting over Child Nutrition Reauthorization and creating a healthy school dining atmosphere, this is surely not welcome news for child nutrition professionals.

Read more: Why is a former teacher promoting his 'McDonald's diet' to students?

5. Senators boycott cafeteria over higher wages
There’s once again unrest in the Senate. This time it’s not over a filibuster but the cafeteria—more specifically increasing the minimum wage to $15 and allowing workers to unionize. Led by Democrats including Senate Minority Leader Harry Reid (D-Nev.), the Wednesday-only boycott is in its second week, with promises of continuation.