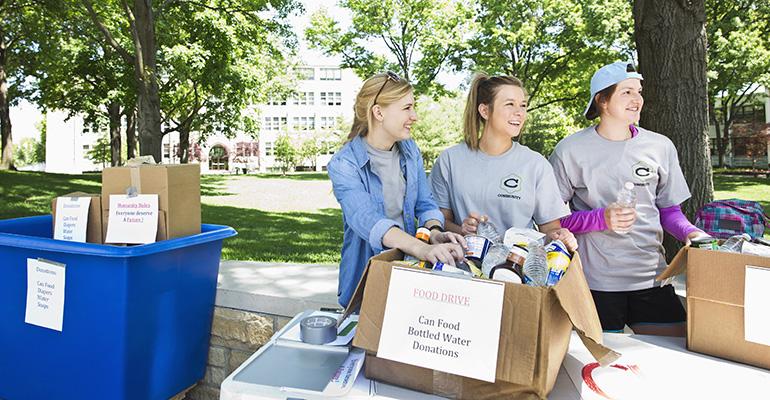 This and how subsidized workplace food is luring employees back in several international markets are some of the stories you may have missed recently.

Lafayette College’s Food Recovery Network (FRN) chapter has historically donated 4,660.5 pounds of food from the school's dining halls to Safe Harbor Easton, a transitional shelter for unhoused people, but not a single pound since spring 2020. Because of “food safety standards on top of COVID concerns, [the chapter] never picked back up with anything after leaving campus in March 2020,” Amanda Crocker ‘23, the previous secretary of the chapter, wrote in an email, adding that the students who had cars to distribute the food and worked with the group had graduated, so they weren’t able to rebuild the club and without the help of student volunteers to transport food from the dining halls, Dining Services became much more limited in its ability to donate to local organizations.

London’s employers are using the lure of subsidized food to coax workers back into the office, according to the Compass Group CEO Dominic Blakemore. Compass, which operates dining at thousands of client locations around the world, has seen an uptick in employers offering subsidized meals as “one of the levers to bring people back to the office,” Blakemore said, while noting his firm’s customers are embracing a shift towards cheaper food items.

In a related development, a growing number of employees in South Korea are flocking to company cafeterias to minimize spending on food, with food service company Ourhome Ltd.’s October sales for office cafeterias in Seoul jumping by 34.7% from last year while office cafeterias run by food distribution and catering concern CJ Freshway Corp. saw sales grow by 46% in October and by 36% in September compared to last year.

West Virginia University (WVU) Dining Services has announced a new partnership with award-winning chef, author and TV personality Aarón Sánchez, who will lend his expertise and recipes to Adobo Cantina, a new Mexican food dining station at WVU’s Café Evansdale that will open in the spring semester. Sánchez has starred in multiple Food Network shows, most notably Chopped and Chopped Junior, and currently serves as a judge on FOX's hit culinary competition series MasterChef and MasterChef Junior. He is also the chef and owner of Johnny Sánchez restaurant in New Orleans.

In a first, the United States Food and Drug Administration (FDA) has decided that a meat product grown in a lab is safe to eat. “This is huge for the industry,” Liz Specht, the vice president of science and technology at the Good Food Institute, a nonprofit promoting alternatives to animal products, told the New York Times’ Clare Toeniskoetter. “For the very first time, this is the FDA giving the green light to a cultivated meat product.”