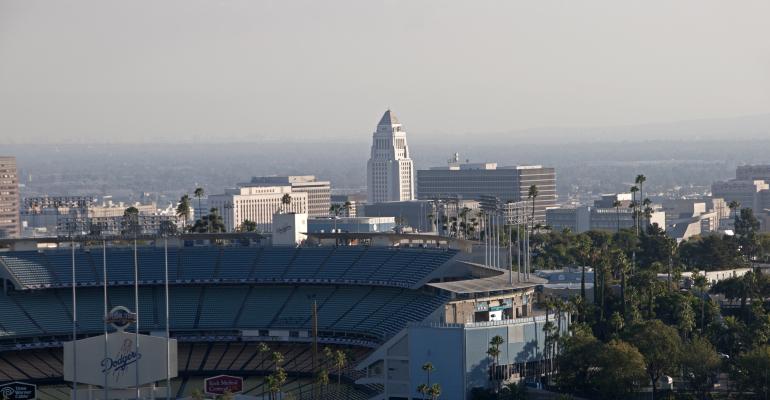 Mitch Diamond / The Image Bank
Dodger Stadium workers in Los Angeles have voted to ratify a new contract with Compass Group and Levy Restaurants that amounts to 75% of the workers being in position to earn more than $30 per hour by the end of the contract in January 2025.
News & Trends>Colleges & Universities

This and the University of Arizona making meal plans mandatory for freshmen living on campus next year are some of the stories you may have missed recently.

Dodger Stadium workers in Los Angeles have voted to ratify a new contract with Compass Group and Levy Restaurants that amounts to 75% of the workers being in position to earn more than $30 per hour by the end of the contract in January 2025, with some employees seeing increases of more than $13 an hour. Meanwhile, at the other end of the country, cafeteria workers at the U.S. Senate have ratified their first contract, securing a $20 per hour minimum wage and benefits like pension contributions and affordable platinum-level health insurance with coverage for family members.

Related: 5 things: Universal use of medically tailored meals could avoid 1.6M hospitalizations, save $13.6B, study finds

Starting in fall 2023, all first-year students living on the University of Arizona campus will be required to purchase a meal plan costing between $3,880 and $6,510 annually that includes nine to 18 meals, dining dollars, Cat Ca$h and guest meal passes. University officials said the requirement is intended to better support bringing healthier dining options that people hope to see on campus. “Having a mandatory meal plan requirement will allow the university to act on changes,” Marites John, assistant director of the Student Unions’ Retail & Contract Management, said. “With the support of meal plans, it provides a structure to quickly change dining options for what students need.”

Over the next five years, Oregon and the federal government will fund a pilot program that expands Medicaid coverage to include a host of additional support services to qualified Oregon recipients, including medically tailored meal delivery programs. The funding, with $500 million from the state and $1.1 billion from the federal government, expands the Oregon Health Plan, the state’s version of Medicaid, to also provide cooking and nutrition classes, food boxes, medically-appropriate prepared meals and help getting federal food benefits. The timeline represents an opportunity to study whether the government’s ability to address root-cause issues that lead to poor health outcomes for low-income residents will alter the definition of care as well as the distribution of funding between clinical and non-clinical/non-pharmaceutical Medicaid coverage.

Students and staff at four South Carolina college campuses now have access to boxes of fresh produce for just $5 as FoodShare South Carolina has launched the new program at the University of South Carolina (USC), Allen University and Columbia College, with Benedict College soon to be added as well. At USC, the boxes contain about ten pounds of produce and are distributed every other week, with 79 boxes distributed on the first day.

The Fresh Food Company at Warren Towers Dining Hall at Boston University (BU) has been using paper plates and plastic cutlery instead of its regular dishes and silverwares for several days because of a broken dishwasher, forcing the eatery to resort to using paper and plastic disposables. The change raised concerns about its impact on the environment, as the dining hall is one of the largest on-campus food places at BU, with 3,000 to 4,000 meals served daily. BU spokesperson Colin Riley attributed the delay in getting the machine repaired to "supply chain issues" that have delayed delivery of a needed part.