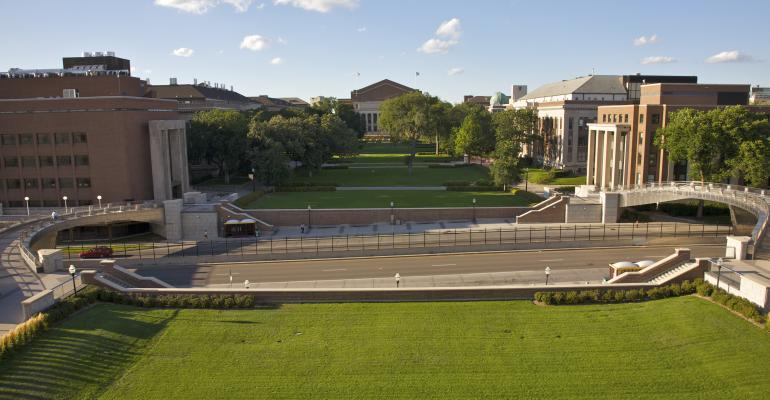 Barry Winiker / The Image Bank
Teamsters Local 320, which represents around 1,500 service workers at the University of Minnesota, says its members have passed a strike authorization vote initiated by the workers at the end of September with a 93% approval margin.
News & Trends>Colleges & Universities

This and Aramark making a commitment to more plant-based menus are some of the stories you may have missed recently.

Teamsters Local 320, which represents around 1,500 service workers at the University of Minnesota, says its members have passed a strike authorization vote initiated by the workers at the end of September with a 93% approval margin. The union says the workers it represents could strike as soon as Oct. 22, which would affect university dining services, residence halls, bathrooms, exercise facilities, grounds and more. “UMN’s refusal to pay workers market rate wages has already created issues across campus," the union stated. "Dining halls have recently faced a crisis of understaffing, leading to limited service hours and meal options for students.”

Elsewhere, the trend toward collective action by foodservice and other support workers across various onsite dining markets seems to be escalating, with recent examples being cafeteria workers at Silicon Valley firm Waymo and Sodexo employees at two airline lounges at Austin (Texas) airport saying they plan to unionize.

Aramark has announced that it intends to have 44% of its residential dining menu offerings be plant-based by 2025 at the more than 250 colleges and universities where it operates. The pledge is part of Aramark's nearly 15-year collaboration with the Humane Society of the United States on plant-based initiatives that is also part of its climate change commitments, including its announcement earlier this year that it would drastically reduce the greenhouse gas emissions associated with the food it serves in the U.S. by 25% by 2030. Currently, according to the Humane Society's Protein Sustainability Scorecard Report, 26-30% of Aramark's menu offerings on college campuses are plant-based.

Advocate Aurora Health in Illinois and Wisconsin is funding a three-year, 6,000-hour culinary apprenticeship program with Washburne Culinary & Hospitality Institute in Chicago that combines meal preparation at Advocate hospitals with courses at Washburne. It offers paid on-the-job training and experience for the students while helping fill a need for kitchen workers at the hospitals. So far, the program is active in Illinois at Advocate’s Christ Medical Center in Oak Lawn, South Suburban Medical Center in Hazel Crest, Lutheran General Hospital in Park Ridge, and Trinity Hospital and Illinois Masonic Medical Center, both in Chicago, as well as the health system’s hospitals in Wisconsin, where it started.

Alfred Sanzari Enterprises will be opening the 3,350-sq.ft. Marketplace, an Urban Eatery dining hall with a seating capacity for over 100 patrons at the company's flagship Glenpointe corporate campus in Teaneck, N.J. on Oct. 21, offering locally sourced, made-to-order and grab ‘n' go meals. Marketplace will operate weekdays between 7 a.m. and 3 p.m. to serve tenants and community members, with tenants also having 24-hour access through a state-of-the-art, fully automated system that includes kiosks for seamless quick in-store ordering and a website for pick-up and catering orders.

Prices at Stanford University's Market at Munger have surged as students returned to campus, with many items marked up over 50% since last spring, reflecting the general inflation in the price of food nationwide. For instance, a 16-oz. bottle of GT’s Synergy Raw Kombucha is now $7.99 compared to $4.99 previously while a pint of Halo Top ice cream rose by 33% from around $6 to $7.99 and a half a gallon of Clover 2% milk increased by 88% from $3.99 to $7.49. The market, located near Stanford's Munger Graduate residences, is a convenient on-campus spot where undergraduates can purchase food and drinks with Meal Plan Dollars while graduate students see it as an essential venue to obtain ingredients to cook their own meals.