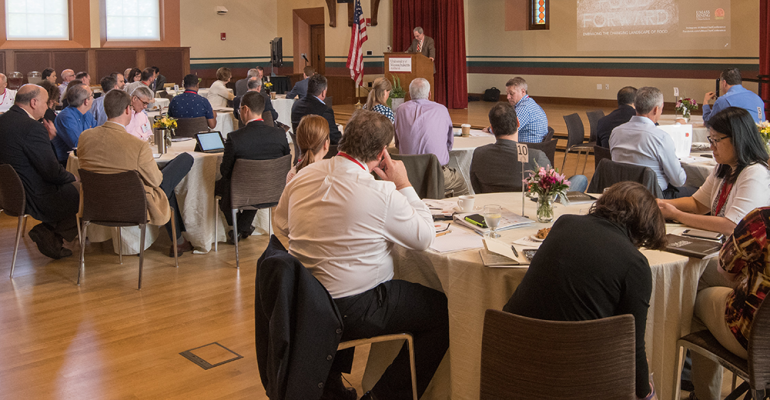 A small group of directors met for the second annual Leadership Symposium where topics like food insecurity were discussed.
News & Trends>Colleges & Universities

5 things we learned from the UMass Chef’s Conference

From student engagement to management skills, here are five things we learned at the 24th Annual Chef Culinary Conference held at the University of Massachusetts.

Penny Cox is the associate vice president for administration at the University of Kentucky. She spoke to a select group of directors at the leadership symposium held during the conference. Cox has spent her entire career at Kentucky, and she told the story of the university’s path to improve student housing, including adding dining locations, and thus increasing student enrollment. While the university built some amazing dining concepts, one of the biggest impacts was an employee named Ms. Joyce at the new The 90 dining location. Ms. Joyce’s job is student engagement and as such she’s empowered to visit students dining in the hall and share little treats, like little shooters of a smoothie or sticks dipped in chocolate. When she does so, she asks the students about things like how their classes are doing. One day Cox was speaking with a student and noticed he had a sticker of Ms. Joyce on his laptop (stickers were passed out to students in a giveaway). So Cox asked the student about the sticker. The student told her that he went to The 90 twice a day to see Ms. Joyce because she went above and beyond in her job and he wanted to do the same at his job after he graduated. This is a great example of how dining services not only plays an important part in creating a campus community but also in being a part of the students’ educational experience. One of the evening events featured whole lobster.

2. Respect incredibly important when it comes to employee inclusion

With so much in the news around the #MeToo movement and diversity, it’s incredibly important that employers create a healthy work environment. One of the most thought-provoking sessions for me at the leadership symposiums was the one given by Anna Branch, associate vice chancellor for equity and inclusion at UMass. Branch was asked how dining services could be a workplace that fostered inclusion for all employees given that there is often a pyramid org chart (i.e., many layers of administration, with employees at the lower levels not having much direct contact with upper management). Branch said the most important thing about inclusion is that people feel they are respected. That respect can be manifested in many ways, but one thing that resonated with me is that respect can be perceived through many ways that are nonverbal and more environmental. For example, are you providing an opportunity for employees at all levels to give their thoughts on projects or initiatives? And are you inviting them to have a seat at the table at all? If you aren’t including those workers in meetings where some of the decisions are being discussed could lead employees to feel they aren’t being respected and included.

3. You can always do a pilot

Yale’s Rafi Taherian spoke about ways to enhance your management mentality. One of his most astute points was that you should find ways to never say never. Even if an idea, particularly one from your university administration, would be difficult or downright impossible to implement, you should always find a way to say yes instead of no. One way to do that is to do a pilot. Anything can be a pilot program with little impact on the organization. For example, Taherian was asked to keep dining halls open later, something he thought would be cost-prohibitive. So instead of saying no, he piloted it in one dining hall and when administration saw that students weren’t using it much, he was able to discontinue it. But simply trying it rather than just saying no made him a team player.

Van Sullivan, director of retail dining at UMass, gave me a tour of UMass’s Blue Wall retail facility, which has 11 different concepts ranging from Mediterranean to sushi and dim sum. One of the locations, The Grill, sells what you’d expect from a grill—burgers. But those burgers are identical to those served at dining’s Baby Berk food truck, yet Sullivan noted that students would tell him the burgers at Baby Berk were so much better than those served at Blue Wall. So he added the Baby Berk branding at the station in Blue Wall and the complaints stopped instantly.

5. Food insecurity among college students isn’t a flash in the pan

Perhaps the most lively conversations I had at the event were around food insecurity. Several of those conversations were off the record, a request I have rarely gotten in my decade-plus covering this industry. There are lots of feelings on this topic, and while everyone is on-board with the idea that something needs to be done to address the issue, there are differing opinions around what some of the factors behind it are and the path forward. One of the things that really struck me was that as complex as an issue this is, the solution is just as complex. Many are addressing it, but is it merely a band aid, and what is the impact of initiatives like food pantries? As many of you are aware, food insecurity and hunger are topics I’m quite passionate about, and as such we’re going to make it a goal to continue to foster communication on the topic. That includes following up on stories we’ve written to find out the results of these programs.