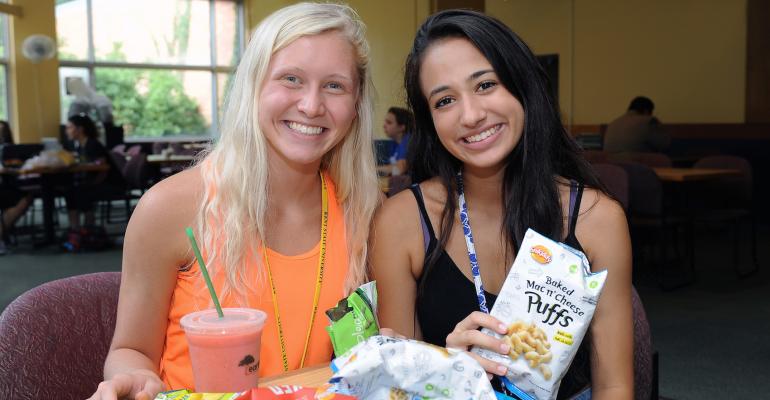 The school’s Prentice Café features five stations where those with celiac disease can safely eat anything on the menu.

A growing number of colleges now have a station or a couple of stations that feature gluten-free menus. However, only one has a whole dining hall that is exclusively gluten-free: Kent State University.

The school debuted the renovated Prentice Café with the start of its fall semester Aug. 29, and since then students have been flocking to the distinct eatery and its five serving stations.

The obvious question is, why dedicate a whole dining hall to a diet restriction that affects relatively few students.

“That was a question we’ve been asked before: ‘Why go there when, truly, [less than] 1 in 100 students are affected by celiac or gluten intolerancies,’” admits Rich Roldan, director of dining services. “But the reality is when we were talking to students and parents over the last five years, it’s just been increasingly more evident that parents, especially, are concerned about their students and their safety.”

Kent State for the past several years had a station exclusively serving food that was free of not just gluten but seven other of the most common allergens, complete with its own equipment and dedicated production area.

However, Roldan says, “with everything going on in that kitchen and all the potential cross-contamination issues, we could never be 100 percent certain that it was always 100 percent gluten-free, that nothing has been introduced, through the air for example.”

So the more they thought about it, the more a complete dining hall dedicated to gluten-free meal choices made sense. What made the decision easier was the growing number of quality gluten-free products coming on the market, he says, which complement standard products like meats that are naturally gluten-free.

“The food [served in Prentice Hall] is regular food,” he emphasizes. “The things we can do with the products available now are pretty good, so we’ve been able to put this program in place and make a full dining facility that has great food and great variety.”

The Mexican and Pizza stations have been especially popular in the first week, Roldan reports, and crowds have been brisk, driven by word of mouth.

“Students are coming in and really telling the story for us,” Roldan says. “We’re also seeing more faculty and staff, which we didn’t see at this location before.”

He admits some of the specialty items—the gluten-free breads and doughs especially—are more costly to procure but that has not been reflected in the prices charged, which are in line with similar items at the school’s other dining halls.

“We decided to absorb that cost [of the specialty items] because we didn’t want to have that stigma of [eating at Prentice Café] costing [students] more at this point,” Roldan says, “[so] we’ve kept prices flat with everybody else on campus. If [food cost] becomes [an issue] we’ll address that next year,” he adds.

Students can use their declining balance meal plans to pay on an a la carte basis just like at the other dining centers. Kent State’s dining program is all retail so there is no all-you-care-to-eat option on campus.

Prentice Café is open weekdays from 8 a.m. to 8 p.m. (6 p.m. on Fridays) but is closed on weekends as there isn’t enough traffic on Saturdays and Sundays at that area of campus to justify it staying open.

1 comment
Hide comments
Related
What is celiac disease?
May 01, 2010