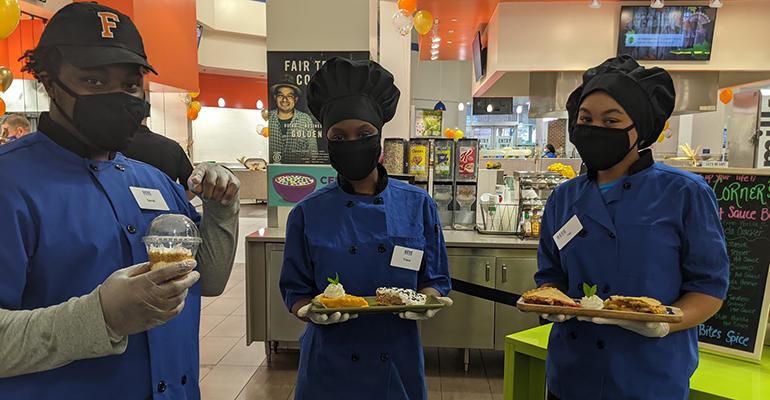 While preparing to welcome students back to the University of Florida for the fall semester, Aramark Resident District Manager of Gator Dining Tim Bucolo thought about what it would be like to be an incoming freshman during coronavirus. It motivated him to deliver the best dining experience possible—while still being safe.

“What we talked about internally was, with the freshmen, what the end of their high school experience looked like. What their summer looked like. Coming onto campus, we wanted to give them that sense of normalcy,” Bucolo says. “Doing it in the safest environment, while maintaining our commitment to sustainability, has been a big challenge.”

That meant reopening all of their dining halls and offering the kind of high-quality food the university’s dining program was known for—but with new protocols that prioritized physical distancing. “We’re still doing fresh-made food. We’re not doing prepackaged items,” says Bucolo. “What has changed is the service style.”

Designated entrances and exits serve to manage the flow of traffic as soon as students walk in. Inside are three or four serving stations condensed, down from the typical 10 or 11. “We’ll have anything from salads, to entrees and sides, to fresh-cut fruit, to homemade pizza, to dessert,” Bucolo says. With self-service and reusable plates, cups and utensils eliminated, students walk through the serving line while foodservice staffers fill compostable to-go boxes with their selections. “We can’t pass the to-go boxes back and forth,” says Bucolo. 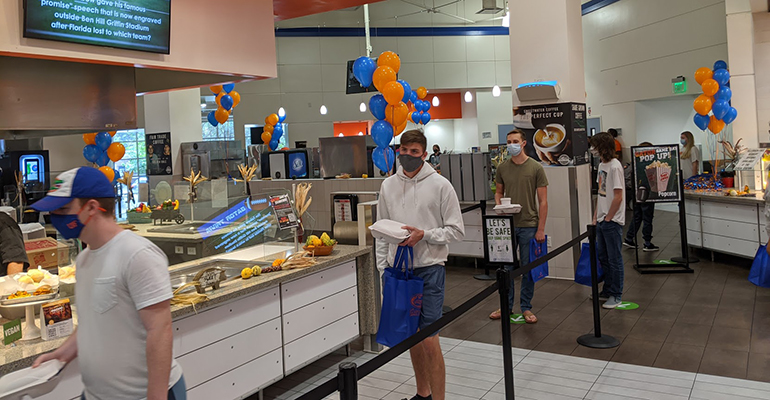 Markers on the floor along with plenty of signage remind students to stay distanced from each other. “We made sure we’re overwhelming everybody with safety signage. We try to update it as frequently as possible so it doesn’t become wallpaper,” Bucolo says. “It’s the same message, just presented in a different way to catch their eye.” And when it’s time to eat, most students take their food to go. Only three of the dining halls have seating, and the tables that are available only have one chair each.

Gator Dining opted to bring back some of the made-to-order stations in November. “We want to do it where the item can still be customizable, but also prepared as quickly as possible,” Bucolo says. So far his team has stuck with simple stations like omelets and the grill. They’ve also opted to prep more ingredients ahead of time, like blanching vegetables for omelets. The fact that fewer students are on campus this semester helps speed things along too. “We’re not serving as many people, which is how we’re able to do it. If there were 30 people in the omelet line normally, this year there might be eight or 10,” he says.

Continuing the community events Gator Dining is known for was important to Bucolo too. “You hear about them when you talk to students who’ve been here for years. We didn’t want them to go away,” he says. Planning for September’s tailgate kick-off party required two weeks of planning everything from the station maps, to the serving line, to the traffic flow. “Instead of doing things under one roof, we basically spread the event across campus,” Bucolo says. 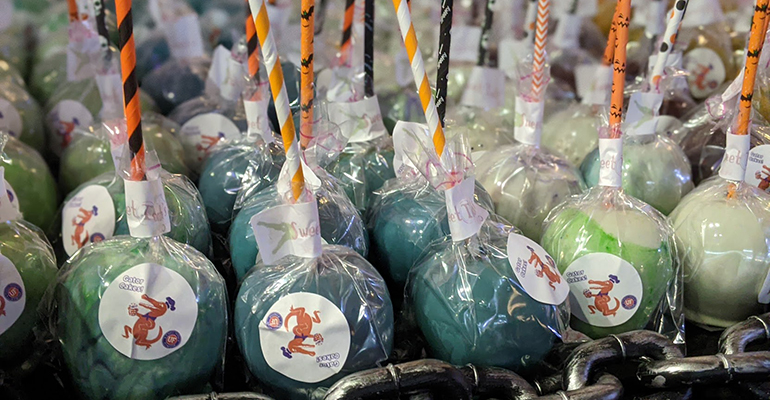 Halloween in the swamp.

Students could take their food to go—or take part in a new roster of COVID-friendly activities. “Instead of having games and trivia and things like that inside, we did them on social media or with QR codes,” Bucolo says. “They could zap the codes and participate while waiting outside, or before or after the event. You could see the students loved it.”

With the tailgating party a success, Gator Dining hosted Halloween in the Swamp, a Halloween party complete with a pumpkin painting contest. “They signed up, picked up a pumpkin, left to decorate and brought it back. Then we lined up the pumpkins on a table and the students walked by and zapped a QR code to vote for their favorite pumpkin,” says Bucolo.

Most recent was a pandemic-style version of the annual Thanksgiving celebration GatorsGiving. The full Thanksgiving spread was all served to go, with the University of Florida Jazz band playing (masked and distanced) as students picked up their food. Everyone worked off the turkey and stuffing with a QR code scavenger hunt, and a pledge drive for the on-campus food pantry collected $1,530 in donations from nearly 200 students.

Bucolo knows that this year’s dining experience isn’t exactly the same as normal—or even close. “But we’re letting students know we’ll give them the best that we can,” he says.