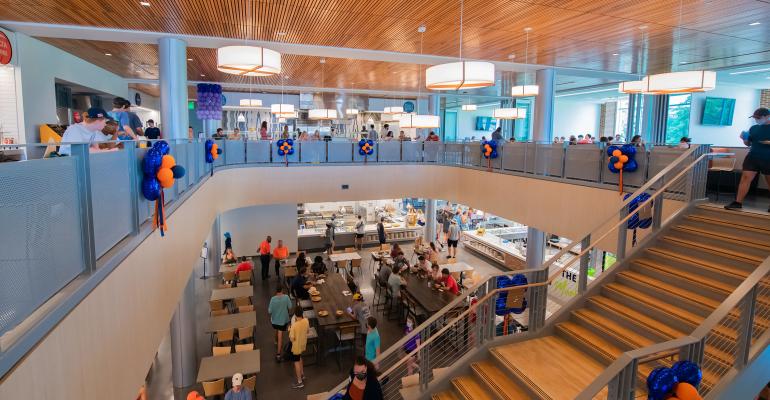 Auburn Dining
The Edge at Central Dining has three levels, two of which house the venue’s nine restaurant outlets, with the ground floor being used for production and storage.
News & Trends>Colleges & Universities

Auburn’s new The Edge at Central Dining offers homegrown food from the College of Agriculture amid nine high-impact serving stations.

Earlier this month, Auburn University debuted its new $26 million, 48,000-square-foot The Edge at Central Dining facility to enthusiastic customer responses. In fact, says Director of Dining and Concessions Glenn Loughridge, it has displaced the campus Chick-fil-A unit as the most trafficked dining location. Auburn’s campus dining has been operated by Aramark since 2018.

“It’s by far the leader now, which is exactly what we wanted,” he says.

The two-level building is a traditional residential dining all-you-care-to-eat venue with nine dining stations and 800 indoor seats, plus 50 more on an outside deck. Loughridge says one of the goals of the new facility is to provide a more traditional dining option for the campus.

“Auburn has had more of a retail focus approach since we had our first dining contractor, and our goal for some time now has been to bring more of a balanced approach,” he explains. “It’s not that we don’t want to have the retail options—the kids love them, they love the food trucks and all the different ways we can provide options for them—but at the end of the day, getting them in front of some healthier options and the community that you build in a dining hall is really hard to replicate anywhere else,” which is one reason the Edge doesn’t offer any remote ordering option. 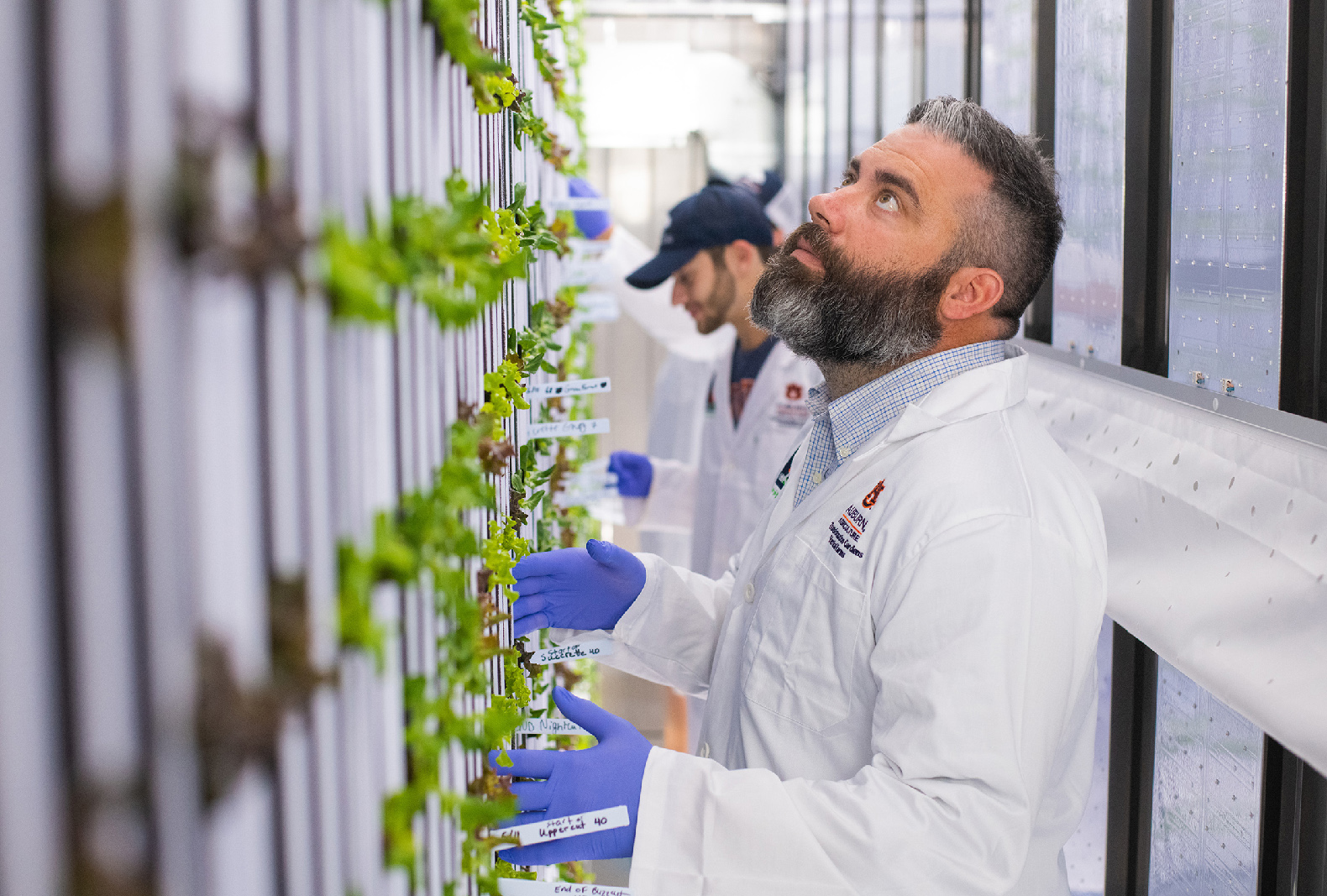 The vertical farm supplies some 250 pounds of greens a week to the Market salad station.

The Edge is the second residential dining facility at Auburn and has a very advantageous location, between Jordan-Hare Stadium and a new 2,000-seat Academic Classroom and Laboratory Complex scheduled to open next fall.

“It’s one of those spaces that doesn’t usually come up, just about at the dead center of campus, and that as much as anything has contributed to student reaction to it because it’s really easy to get to,” Loughridge offers. The structure is a brand new building with the prep/storage areas on the ground floor and the dining complex on the two upper floors.

Two new retail outlets—a full-service Starbucks unit and a Smoothie King unit—are scheduled to open on the ground floor when the new Academic/Lab facility opens in 2022.

Unlike some schools that have delayed opening campuses and/or started online, Auburn is fully open, starting fall classes on Aug. 16 with a full complement of residential students filling its some 4,800 on-campus beds. In fact, Loughridge says the school is seeing its largest ever freshman class this fall. 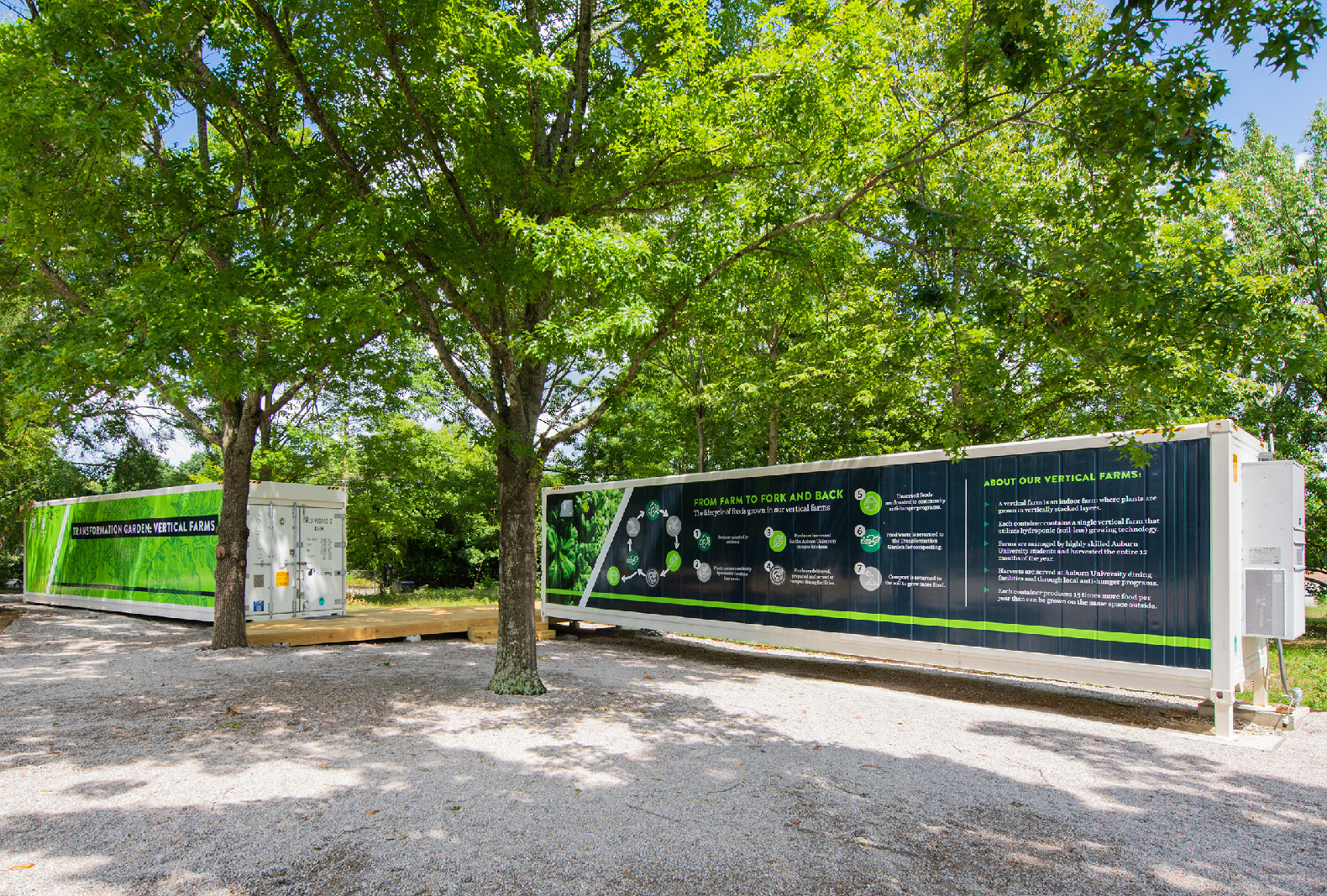 The vertical farms are located in these trailers on the auburn campus, meaning what they produce is very local and can be used almost immediately with little transport involved.

While the design and construction process on The Edge began before the COVID pandemic hit, adjustments to accommodate post-pandemic conditions have been fairly minimal as the space is already quite expansive—more like a food hall with different concepts occupying their own areas than a traditional all-you-care-to-eat college dining hall—with multiple, scattered seating options allowing spacing and distancing. Meal service is a combination of staff-serve and some self-serve in accordance with state guidelines.

On the first floor are a deli with a TurboChef oven and panini maker for hot options and offering both grab and go and customized sandwich choices using freshly baked breads. Next to it is The Market with a salad bar (operating as a yogurt parfait bar in the morning) using spring mix—some 250 pounds a week, Loughridge says—from the onsite vertical gardens, and tomatoes and cucumbers from the campus aquaponics program.

“So we get a lot of fresh produce grown on campus and usually served the same day,” he notes. Similarly, the venue gets ground beef from the university’s Meat Slab operation, where students learn meat processing, and local products sourced with 200 miles of campus or in-state make up at least 20% of the products purchased in accordance with Aramark’s corporate requirements. 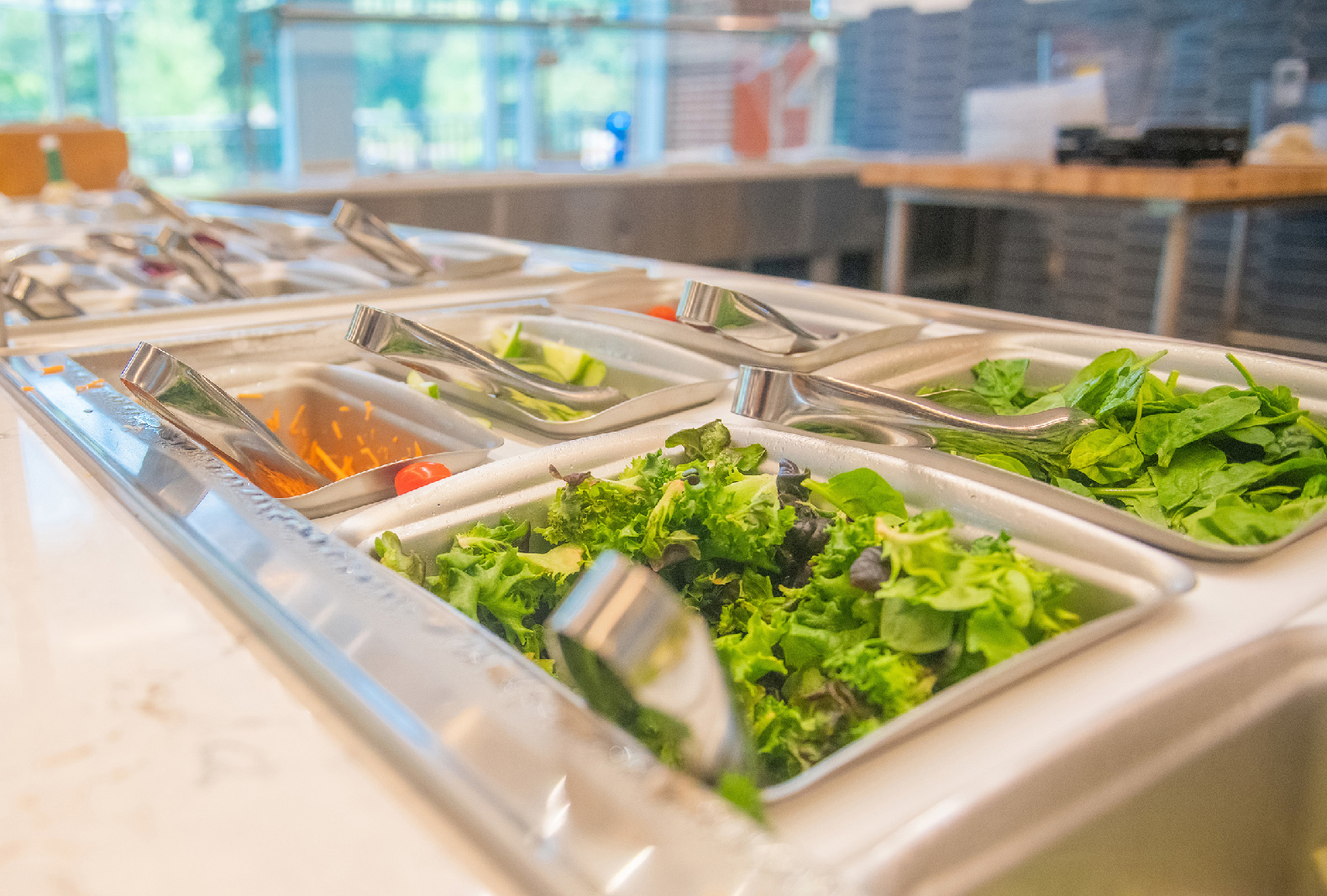 The Market offers a salad bar that uses spring mix from the onsite vertical farm, and tomatoes and cucumbers from the campus aquaponics program.

Also on the first floor is the Traditions homestyle entrée station offering meat and meatless proteins with sides and a dessert selection with ice cream maker, the Ignite grill station and the Urban Kitchen station, which features a round grill that can serve as an omelet station in the morning and then make stir frys later.

On the top level is the Street Works station with a tortilla maker that turns out fresh tortillas daily. “People have always loved our food trucks, so we wanted something that spoke to that,” Loughridge says, noting that a planned promotion—suggested by Operations Director John Holloman—will have Street Foods delivering fresh tortillas to the other various stations, where students will get to create tortillas using the ingredients from different cuisine traditions offered at those stations.

This level also has the True Balance station, which offers dishes without eight of the most common food allergens and has its own storage and production; the Pizza On The Plains station, which has a double-deck conveyor belt stone oven; and the Twirl pasta station that makes its own fresh pastas that are served with a variety of sauces and toppings to order.

This level also has about a hundred feet of breakout rooms that can be sectioned for use by different groups, as well as the venue’s most popular seating because of the views out the large windows.

The Edge is open until 10 p.m. Monday-Thursday and 9 p.m. Friday-Sunday and while plenty of choices remain in the later hours—especially late evening munchies like pizza—some stations due start shutting down in the last hours if they aren’t generating traffic, Loughridge says.