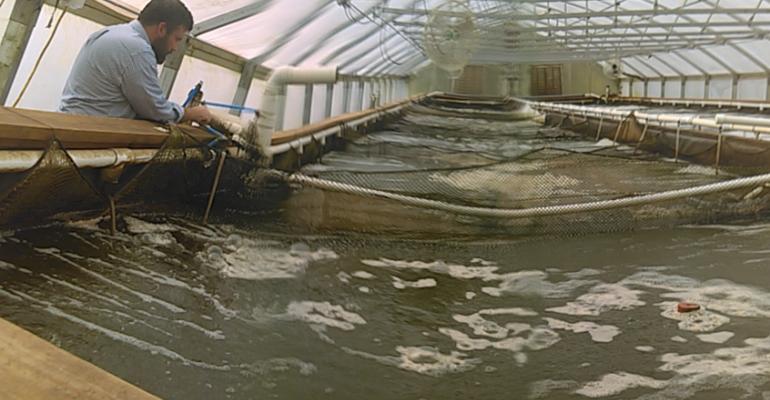 <p>Through a partnership between dining services and Auburn professors, tilapia is being grown on campus in an aquaponic fish house. The tilapia are used in dining services.</p>
News & Trends>Colleges & Universities

Creating a closed-loop system, the university is growing tilapia and cucumbers that are used in the dining services program.

Students at Auburn University in Alabama enjoy an array of dining establishments emphasizing fresh, local foods, thanks to a partnership between on-campus Tiger Dining and contractor Chartwells Higher Education Dining Services. Those students enjoying a meal, however, might not realize just how fresh the tilapia and cucumbers on their plate really are.

The E.W. Shell Fisheries Center, a 1,800-acre research station dotted with earthen fishponds and buildings housing laboratory and outreach facilities, is located a few miles north of Auburn’s main campus. Set off a dirt road looping through the station are two full-size greenhouses. One contains tanks brimming with tilapia, and the other is full of cucumber vines trellised on strings, curling up from Dutch buckets filled with pine bark substrate.

Here, Auburn researchers from fisheries, horticulture and biosystems engineering are researching aquaponics, which combines aquaculture with hydroponics, the practice of growing plants without soil. Out back of the greenhouses, they’re also looking at ways to grow algae on the little bit of water that is released from the vegetable greenhouse.

The greenhouses are producing some 65 pounds of cucumbers a day, as well as 150 pounds of tilapia at a time, processed and delivered when dining needs the product. Campus dining gets year-round access to exclusive, high-value products in return for a reasonable investment, and researchers are able to study a working model that otherwise would be too expensive to operate.

“Many times it is difficult to find a clear purpose for dining to invest in an academic program, but in this case there are direct benefits to each that are clear and easily defined,” says Glenn Loughridge, director of dining.
Aquaponics has been called “the future of farming” because of its highly efficient use of water to grow both fish and produce. The system uses just a fraction of the water required in traditional farming. A bonus is that the water released from the fish tanks provides nutrients in the form of nitrates for the plants, replacing fertilizer.

Aquaponics optimizes productivity per acre of land, by producing far more fish and vegetables per square foot than traditional methods. This eliminates the issues posed by traditional chemical fertilizers with the potential for run-off, which can pollute streams and rivers, ultimately carrying nitrates into the oceans to nourish algae blooms (think “red tide”). Those algae blooms absorb oxygen, creating vast dead zones where most sea life can’t survive.

Aquaponics sounds like a great solution to a lot of problems, but there are some issues. For one thing, most aquaponics farmers are backyard enthusiasts not operating on a commercial scale. Best management practices and produce safety standards haven’t yet been developed, and there are questions about the economics of aquaponics on a larger scale. That’s why the research is necessary.

“Our No. 1 objective was to build an economic model, and now we’re making improvements,” says Dan Wells, a horticulture professor involved in the project.  “We are trying to maximize water and feed efficiency, two of the major inputs in aquaculture. When you release water from a fish tank, you can hear dollars going down the drain.”

Plans call for growing tomatoes in another greenhouse. Three or four greenhouses could be supplied with the water and nitrates produced by one fish house, Wells said.

Local foods are used in as many venues as possible, and the aquaponics partnership was a natural outgrowth of Loughridge’s philosophy and Chartwells’ desire to be on the cutting edge of sustainability in dining services.

Loughridge contacted Wells because he envisioned growing greenhouse vegetables. When Wells proposed adding fish to the mix, that led to contact with Jesse Chappell, Terry Hanson and other fisheries faculty.

“He realized AU Tiger Dining would have to make an investment, so I approached him about this idea,” Wells says.

The two greenhouses were built in 2006 with an energy conservation grant. In 2015, AU Tiger Dining invested in refurbishing the fish house and greenhouse and replacing the electrical system. AU Tiger Dining also buys fish and seed on a regular basis.

In return, Wells, Chappell and Hanson supply dining services with fresh cucumbers and fish produced on a staggered schedule. The staggered schedule means AU Tiger Dining gets fresh fish and cucumbers when needed, and the scientists have an opportunity to study a commercial aquaponics system.

“Production of local produce usually grinds to a halt during peak demand for a college dining program,” Loughridge says. “This is why having access to the fish and produce from the aquaponics project is so valuable to campus dining. Production goes on year-round rather than only during the very beginning and end of the academic year.”

Jacque Kochak is the communications specialists with the Auburn University Food Systems Institute.

Antioch strives for a meal program fit for the college's philosophy
Jul 20, 2015