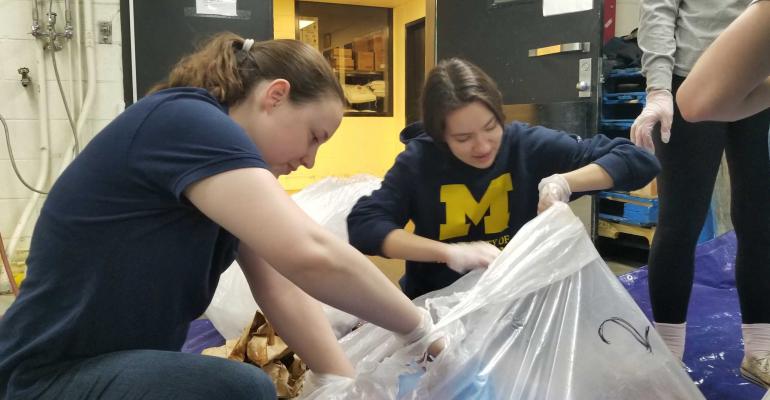 The feel-good aspects of composting and recycling in a dining hall are well-known: Your community knows the dining team is “doing their part” for our environment and students feel good knowing waste is being kept out of landfills. But when it comes to answering the questions “how much, exactly?” and “is it worth it?”, that’s where audits come in.

For two evenings this spring, the University of Michigan’s Bursley Dining Hall conducted a comprehensive audit in collaboration with student group Planet Blue Student Leaders (PBSL) and Net Impact, a sustainability leadership network for colleges and universities. The audit covered compost, recycling and landfill waste produced in both back-of-the-house preparation and front-of-the-house uneaten dishes. Since most of the plates, flatware and glasses used in the dining hall are reusable, only back-of-the-house recycling was measured during the audit.

The student group audited over 1,400 pounds of combined landfill, recycling and compost waste. Out of that overall waste, compost alone made up for almost 70% of the volume, a very good number.

“The results are highly encouraging,” says Claire Haase, Net Impact undergrad audit assistant, pointing out that compliance with the rules for usable compost “is key to making this program effective…Nearly 96% of items were composted correctly.”

But there is still room for improvement. Areas the audit found could use some work included proper bagging of compost for durability, compressing cardboard before bagging and completely filling each recycling bag before sealing it and better compost education for guests.

Also, contamination of compostable and recyclable samples was found, something that’s a bugaboo for many sustainable programs. Although the audit found 99.7% of staff and guests composted properly and 99.82% recycled, a 0.25% and 0.18% respective contamination adds to the challenge. Not only that, but a small but disturbing number of items that could have been composted or recycled were found in landfill bins.

“Bursely Dining can still improve substantially in diverting its waste from the landfill,” Haase says. “Within each landfill sample, we found a troubling volume of composting materials, punctuated by parchment paper and compostable food waste. It remains important to communicate that landfill bins should not be considered a ‘catch all’ waste stream when it’s not clear whether an item is compostable or recyclable.”

A 12-week consumer culture-focused food waste study conducted in 2016 during Bursley’s composting pilot program found that the education piece was trickling its way down through the underclassmen. For example, nearly 4 in 10 sophomores who lived in Bursley in 2016 during the pilot said they know “a lot” or “a fair amount” about composting compared to less than 3 in 10 (28%) of sophomores who lived in other residence halls.

While sustainability on a large scale remains a work in progress, as at many universities, the audit overall provided reassurance that the dining team at Bursley—as well as those who eat there every day—are on the right track.

“With over 95% of waste from our two-day sample set properly sorted…Bursley is clearly on track to eliminate contamination and more, getting closer to zero-waste operations,” according to the report on the audit compiled by the student group. “This display of excellence positions Bursley well to expand its leadership within [the dining dept.], sharing best practices across the entire UM campus, including non-dining locations.”

Setting up composting at non-dining locations is up next, says Michigan Dining’s Sustainable Food Program Manager Alex Bryan: “The next step is to expand on residential composting—which we have in Bursley—even to buildings without a food service, as those areas generate a large amount of compostable waste.”