The Berea Kids Eat outreach program at Berea College in Kentucky has partnered with the College’s campus food services, operated by Sodexo, and Berea Community School (BCS) Dining to feed local K-12 students who are home while their schools are closed due to the coronavirus.

“As soon as the local schools shut down [because of coronavirus], Berea Kids Eat applied for a waiver to begin serving students as soon as possible,” explains Teri Thompson, vice president for strategic initiatives, adding that it was critical because 87% of the school district’s students qualify for subsidized meals under the National School Lunch Program and about 25% of local households fall under the federal poverty line.

Related: College dining trending: Universities in four states to reopen this fall; the impact of coronavirus on college dining services

The meals are served to anyone 18 or under at the BCS facility, which is next to the college, on Mondays, Wednesdays and Fridays. Each pack contains two days’ worth of meals that can be picked up at a drive-thru outside the building. There is also a limited delivery service to reach those who cannot get to the school site. 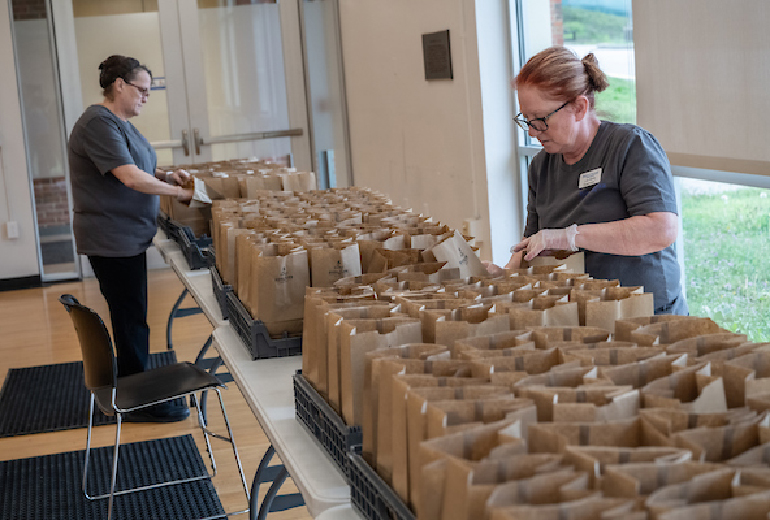 Meal packs awaiting distribution at the Berea Community Schools. Half are made by the college dining service and half by the school nutrition department.

About half the meals are produced by the Sodexo team at the college and transported over, while the BCS dining team produces the rest. Through April 10th, the program had served almost 37,000 meals.

In addition to the standard sandwiches and wraps, “they also try to provide as many fruits and veggies from the college’s farm as possible,” Thompson notes. “Berea College has one of the oldest continuously functioning higher education farms in the country,” she says proudly.

The meal service is in accord with the college’s Great Commitments mission statement, one of which is to serve the Appalachian community.

“Because of that, three of the programs in my division are outward-facing outreach programs,” Thompson offers. “One is Grow Appalachia, which works to address food insecurity in Central Appalachia, and Berea Kids Eat is a subprogram of that.”

Berea Kids Eat started in 2016 and is funded primarily through the USDA’s Child Nutrition Program and the Kentucky Department of Education Summer Food Service Program. It has served more than 100,000 meals since its launch, Thompson says. 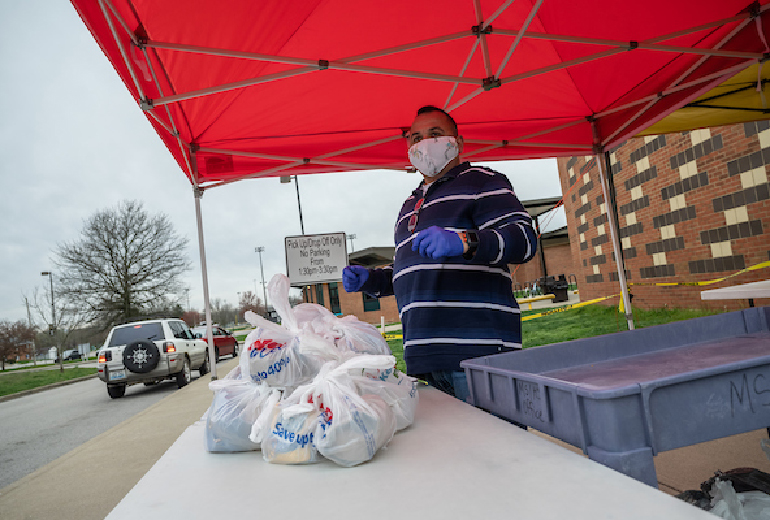 Meals are distributed three days a week at the Berea Community Schools complex, with each pack containing enough for two days.

“They primarily work over the summer,” she explains, “but they have also put together a weekend backpack program during the school year, and also expanded to launch a youth farmers’ market and a community garden at Berea College.”

Berea College has a long tradition of social service and independence, being the first co-educational, interracial institution of higher learning in the South when it was founded in 1855. Its diverse enrollment of around 1,600 consists entirely of low-income students.

“If you make over a certain amount, your application isn’t even considered because no student at Berea pays tuition,” explains Thompson. Funding comes from a combination of a “robust” endowment, donations and state and federal aid. As a federally recognized work college, Berea College requires its students to put in at least 10 hours of work a week on campus, but the compensation isn’t just a tradeoff for tuition as they also receive paychecks they can use for personal expenses or to send home to families.

The college shut its campus to in-person instruction on March 12, but as at most other colleges, not all students could leave for various reasons and about 150 have remained. The campus dining operation continues to serve them and is also providing free meals to college staff who remain.