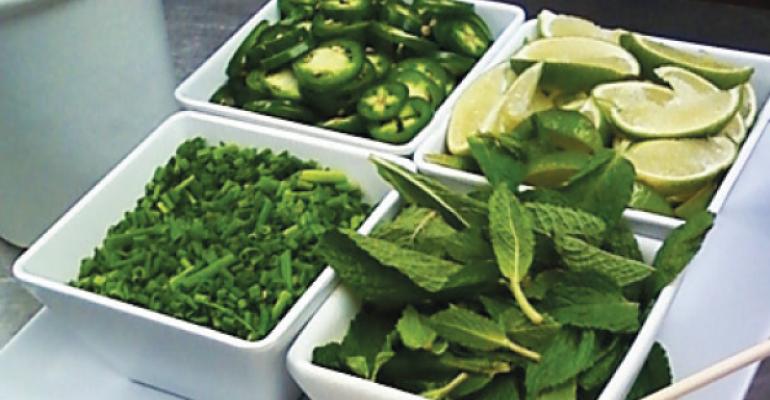 MIT Executive Chef Brian McCarthy has been eating vegan for decades and wants to share his expertise with those who cook for vegans in volume.

MIT Executive Chef Brian McCarthy has been eating vegan for decades and wants to share his expertise with those who cook for vegans in volume.

Brian McCarthy was a vegan before being vegan was cool. The executive chef at the Massachusetts Institute of Technology (MIT), in Cambridge, and author of the recent vegan-for-volume book, “The Professional Vegan Cookbook” hasn’t eaten any meat or dairy for about 20 years.

“I didn’t even know it was called ‘vegan,’ the way we had started to eat,” says McCarthy, describing a diet he and his family had adopted, thanks in part to his wife’s training in dietetics. Being on the West Coast didn’t hurt, either.

“We were a young family in Portland, Ore.—hippie-ville. Our main thing was we wanted to eat healthier. And one day, we found that we weren’t eating meat or dairy.”

At the time, McCarthy was cooking at the vegan station at Intel’s dining operation, where many people were already starting to adopt the vegan lifestyle. Now, at MIT, he’s finding even more vegans to create options for.
Here’s his take on some commonly asked questions about what it means to cook for vegans in volume:

A lot of people first experiment with the vegan lifestyle in college, and you have the opportunity to guide them. What are some mistakes you see new vegans making in their food choices?

A: The first time many people try the vegan diet, they’ll end up eating exclusively fries, veggie burgers and salads. When they’re in the cafeteria, they can only eat what’s provided, so it’s a two-way road. It’s my job to show them the different options.

Q: Why did you write the cookbook?

A: There are so many vegan cookbooks for cooking at home, but I felt that there weren’t enough for high volume—for commercial and noncommercial cooks and chefs, who are feeling the pressure now to meet this growing demand for vegan food.

Q: Your cookbook has a very multicultural vibe, but it seems to gravitate most to Indian, Thai and Mediterranean cuisines…

A: Those cuisines lend themselves so well to vegan dining. Cultures where the traditional menu is more plant-based are a great starting point. Especially Indian food. I love it because of the great flavors. It’s really filling…the dals and chutneys…it’s just really good.

Q: In a dining hall setting, is it a good idea to emphasize the vegan options?

A: You want people to be able to identify it, but I try not to make it too obvious. If we’re doing a salad, maybe it is vegan, but then you’ll have a choice of chickpeas or tofu, and we’ll also have some smoked turkey there. This could work for anyone.

Q: What aspects of preparing vegan food in volume are the most challenging?

A: I would say developing recipes for baking. Those recipes require the most testing, because you have to get the quantities and ratios just right, like for vegan waffles or vegan cornbread.

Q: Would you say vegans are especially vocal on campus?

A: Actually I’d say they aren’t vocal enough. There’s this unspoken murmur in the vegan community of, ‘We’re trying to be polite…we should be happy there even is an option.’ Instead, I try to set standards. A lot of what I see at different places, vegan menu options look like  side dishes to me. When you eat a meal, you want to feel like you just ate something substantial.

Q: Any other tips on making vegans feel comfortable in the dining room?

A: When they make suggestions, make sure you follow through. If someone asks for a hummus wrap, I’ll get that on the menu. Otherwise, they feel ignored. Encourage and reinforce their input.

Q: What are some powerhouse vegan ingredients?

A: There are so many different kinds of lentils out there. And one vegetable that can act like a protein is the mushroom. I have a Mushroom Wellington recipe in my cookbook.