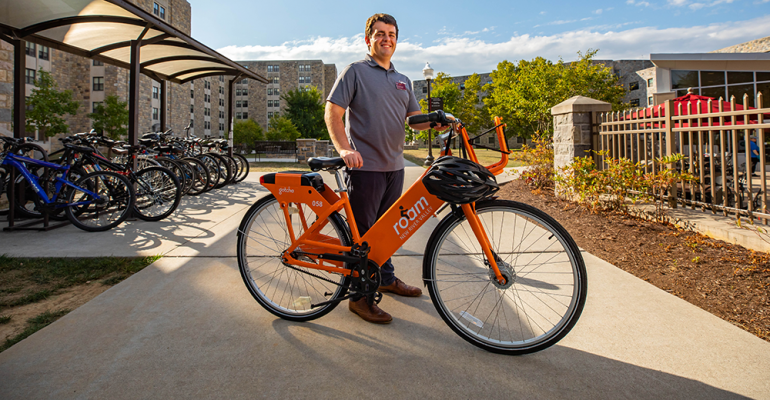 Blake Bensman, sustainability manager for Dining Services, came up with the bike tour as a way to get students thinking about food and alternate transportation in a new way.
News & Trends>Colleges & Universities

The words of the day were “tasting” and “touring” when Virginia Tech students and staff hopped on bicycles and peddled to culinary adventure for the first-ever Sustainable Eats Bike Tour, held last month on campus. The tour included stops where the bikers talked with chefs, tasted organic menu items and met Dining Service’s on-staff farm manager. The event was planned to foster a direct connection—in a physically active way—between students and local food programs.

“We wanted to create an event where students could engage with who grows their food and prepares their meals,” says Blake Bensman, sustainability manager for Dining Services and the organizer of the event. “Too often we take that for granted, and this day allowed them to experience firsthand, and most importantly taste, some of our campus initiatives.”

At the first stop of the bike tour, Virginia Tech Executive Chef Mark Bratton prepared sustainably sourced trout for the students on the tour and talked about aquaculture as they enjoyed the meal.

The idea first came about in a brainstorming session in search of a fun and different food tour. Bensman, a Disney World fan, thought about a food and wine tour he’d experienced at Epcot, “and how you can go around the world, so to speak, so why not add a bike element to that?”

A group of about 20 students hopped onto the orange bikes, which are part of a new bike-share program Roam NRV, launched through a regional partnership among Virginia Tech, Blacksburg, Christiansburg and Montgomery County. There are 12 bike stations, with eight of them on the Tech campus and almost 100 bikes in circulation. Students simply unlock a bike with a mobile app that’s linked to a prepaid account, then return the bike to any station when they’re done.

Along for the ride was Nick Quint, manager of Tech’s Alternative Transportation department, to talk about human-powered commuting and the Hokie Bike Hub, a campus shop that provides free bike repair and maintenance for those with their own bikes.

With no further ado, the riders were off. The first stop, a dining hall, featured Executive Chef Mark Bratton preparing almond-peppered trout, pan-seared and served with beurre noisette. In addition to being Bratton’s modern take on the seafood classic trout almondine, the dish was a conversation starter about aquaculture, sustainability and using the Monterey Bay Aquarium as a resource for sourcing seafood.

“We get our trout from a fishery in North Carolina,” Bratton says. “It was very well received in all respects…they liked the taste and presentation and they were really excited that the food was sourced with integrity.”

Then, working off the delicious seafood, the riders were off again, headed to the second stop at another dining center, where they learned about Homestead Creamery, located about 60 miles east of campus, whose family dairy farmers supply ice cream for the famous milkshakes at Tech’s branded burger concept, Burger ’37.

The tour also featured a student-run produce stand from Homefield Farm, a six-acre farm about 10 miles west of campus. A partnership between Dining Services and the College of Agriculture and Life Sciences, the farm produced 55,000 pounds of organic vegetables last year for dining halls on campus. A lot of the produce appears as ingredients in scratch-made soups and sandwiches.

Since this tour was such a success, another tour is already in the works for Earth Week next year, Bensman says. “We want to roll it out even more, possibly with two or three groups, and improve on getting the message out.”