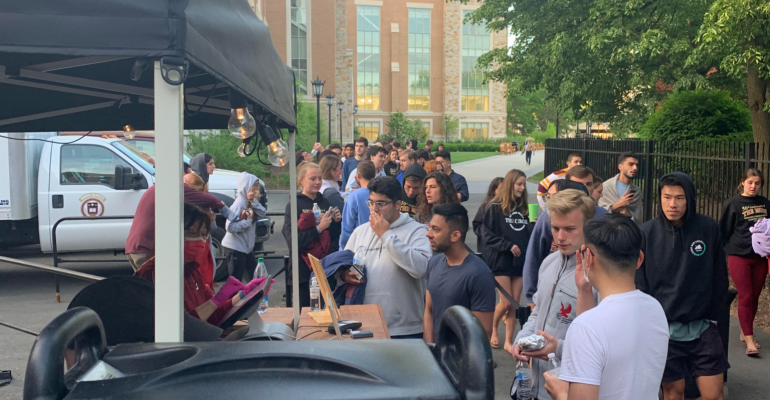 For their pandemic pop-ups, Boston College chose a patio connected to one of the residence halls.
News & Trends>Colleges & Universities

During the pandemic, the catering team brought students together over fun foods, served outdoors. Now the events are part of their regular program.

When Boston College students returned to campus in the fall of 2020 under full Covid restrictions, the catering team was glad to have them back on campus. But they couldn’t serve the campus the way they had before. The 30-person team was used to a full schedule of events, from small coffee breaks to huge dinners, to help feed close to 15,000 students. All that fall, they created meals for students who were under quarantine but didn’t hold a single event.

As the end of the fall semester approached, assistant director of catering Scott Powers and his team started brainstorming new ideas. They knew they needed to increase their revenue. They wanted to keep the catering team busy. But most importantly, they wanted to provide students with something different and meaningful that would help relieve the monotony and disorientation they were all experiencing.

“We wanted to break through the stress and uncertainty,” Powers says. “We were looking for something fun, something to keep student morale up and to keep my team excited.”

The “something” they settled on: outdoor pop-ups. They were already accomplished at creating these sorts of events. Just before the pandemic, in fact, they transformed a space on campus where they usually serve meals to athletes into a traditional Japanese ramen shop. That concept earned a NACUFS Catering/Special Event Grand Prize.

For their pandemic pop-ups, they chose a patio connected to one of the residence halls. It’s just outside one of the campus kitchens, making it easy to store and replenish food and supplies. It’s also in an area that gets a lot of afternoon foot traffic; pop-ups start at 2:00 p.m.

At each event, they set up a stand made by a member of the staff, a tent and a number of long tables where catering staff work at portable grills, flat tops and burners.

“I like getting my staff out there,” Powers says. “They love to interact with the students and it’s great to see [food] prepared in front of you.”

In the winter and spring of 2021, they held pop-ups every other week, serving creative foods that would get students excited.

Pop-up themes included tater tots, poutine, ramen, traditional and walking tacos, chicken sandwiches, grilled cheese and cocoa bombs. Their most popular pop-ups were the simplest. The grilled cheese pop-up offered tomato soup, a beverage and four sandwich options: three-cheese, brisket, apple and fig with vegan cheese or bacon avocado. Their traditional tacos sold out quickly. And their version of the TikTok cocoa bomb sensation was a smash hit, even though it fell on an unseasonably warm day. To make it happen, they partnered with the campus pastry team, who made the cocoa bombs, and the bookstore, which supplied Boston College mugs that were included in the price.

They serve an average of 400 students per pop-up—and sell out at almost every event. Students pay using cash, card or their campus IDs, so it’s a seamless part of the student experience.

They also unintentionally established a tradition. As seniors walked back from watching the sun rise over a reservoir on graduation morning last year, the dining team was ready with breakfast sandwiches and coffee at 5:00 a.m. This year’s seniors have already checked in to make sure they plan to do it again.

A few pop-ups could be categorized as special events. Some campus groups sponsored them, providing the food to students for free, such as a group that gave out ice cream sandwiches to seniors to promote the senior fund.

A dining-led Global Flavors group, which partners with students to test recipes from different parts of the world, is working with the catering team to use pop-ups as a testing ground. Last year, they hosted an arancini pop-up, offering parmesan and Italian sausage options. This spring, they’ll introduce a Cuban bowl, a pile of beef picadillo, mojo onions, sweet plantains and cilantro topping congri (black beans and rice).

This year, with Covid protocols waning and students back in class—and in the dining halls—the catering team is once again running events. But they haven’t abandoned the pop-ups. Even though they were originally intended to address a crisis, the events are now part of campus life.

“It brought my team together and creatively gave them an outlet to do something fun and exciting. And it brought us together with the students,” Powers says, noting that they still hold pop-ups once a month, and aren’t planning to stop. “Food always brings people together.”